Bill Donohue is a real person! Who knew?

I'd seen Bill Donohue on the Colbert Report and I had just assumed that he was acharacter created for the show, like the black Republican character that Tim Meadows portrays occasionally. But no! Apparently, Bill Donohue is a real person, and his organization, the "Catholic League," is an actual thing. Who knew?

And here's the proof. Could a fictional character pen a column for the Washington Post? The Washington Times, sure. But the Post? Probably not!

There are many ways cultural nihilists are busy trying to sabotage America these days:

Wow, right off the bat! Opening strong with a burst of paranoia right in the first sentence. I think we can see where this is going already. The "nihilists" are going to be "anyone with a point of view different than Bill Donohue's." And anyone with a different point of view is naturally OUT TO DESTROY AMERICA!!!!!

multiculturalism is used as a club to beat down Western civilization in the classroom;

Right, because acknowledging the contributions of other cultures is obviously the same thing as saying that Western Civilization Sucks!

Everyone knows that the only literature worth reading is Shakespeare, Mark Twain, and the King James Bible. If students are required to read, say Gabriel Garcia Marquez, or the Epic of Gilgamesh, well, how will they know that everything good ever written was written in English, which is the language God speaks because English is so obviously superior to every other language ever. Hmm? How are they going to learn that? Answer me that, smug little multi-culti nihilist.

Not for nothing, but wouldn't a belief in multiculturalism make one definitionally NOT a nihilist? Just sayin'. Do go on, Bill.

Unless you're referring to the Sisters of Perpetual Indulgence*, I have no idea what you're talking about. Who is attacking religion while being a sexual libertine. I think sexual libertinism would take up so much of one's time that one would not have much opportunity to attack religion.

the public expression of religion;

Yeah, not true. The ACLU, et al have no problem with you or anyone else expressing your religious views publicly. The ACLU in particular would fight any effort to keep you from doing just that. That is what they do. What they object to is the use of public funds and publicly-owned land for religious expression. They like the idea of the separation of church and state. And so should you, by the way, because if the US of A ever did decide to pick a state-sponsored religion, you can bet that it won't be Catholicism. There are way more Protestants around. But don't worry, the ACLU will be there to prevent Protestants from persecuting Catholics should that day ever come. It's what they do.

elements in the Democratic party demonstrate an animus against Catholicism;

and secular-minded malcontents within Catholicism and Protestantism seek to sabotage their religion from the inside.

What makes people like Bill Donohue so paranoid? Why do you think everyone's out to get you, Bill? Do you really believe that there are discontented catholics who think to themselves, "I should just quit this church, but no! I will remain in the pew and take down this whole organization from the inside! Bwa-ha-ha-ha-ha!!!!" Do you know how ridiculous you sound?

Ok, that's one paragraph. Just the first paragraph of Bill's diatribe. And I left a little out. And I'm already exhausted. Let me take a quick kitten break. 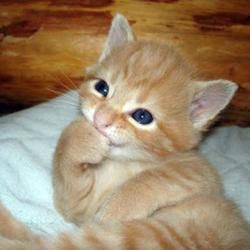 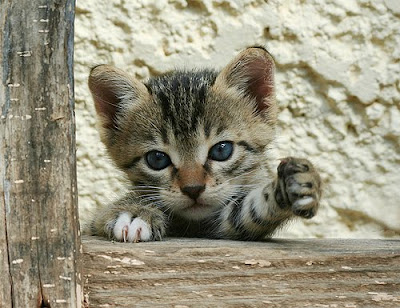 Oh, well hello to you too, little fella! 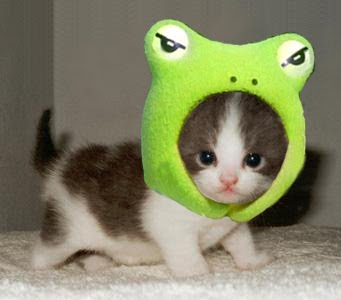 AAAA!!!! (squeal like a schoolgirl) That did it! I'm re-born! I'm ready to plunge back into the demented world of Bill Donohue!

Ok, you were saying, Bill?

Yesterday's radicals wanted to tear down the economic structure of capitalism and replace it with socialism, and eventually communism.
Oh, my God! Bill Donohue accidentally wrote something that is correct. There actually have been radicals who have wanted to replace capitalism with socialism or communism. Good job, Bill! Keep it going!

Today's radicals are intellectually spent: they want to annihilate American culture, having absolutely nothing to put in its place.
Oh, well it was nice while it lasted.

Seriously Bill, that's just too ridiculous even for you. Who are these people who want to annihilate American culture and replace it with. . . .nothing? Who do you think wants that? Come on, you should be able to at least name just one of these people.

In that regard, these moral anarchists are an even bigger menace than the Marxists who came before them.
Because they're imaginary!!!!!

Oh, it was great! We really stuck it to those Catholics! Western civilization is bound to fall any day now!
Bwa-ha-ha-ha-ha!!!!

Secular saboteurs have often seized the arts to make a statement. That's why the blasphemous often tracks the obscene: if the goal is to put an artistic dagger into the heart of culture, then it makes sense to use all the ammo available by attacking the sacred.

I will not have sex on camera! I'm not that kind of girl!

C'mon, baby! If you do, you'll be plunging a dagger into the heart of American culture!

Well, why didn't you say so? In that case, I'm willing to sacrifice my dignity for such a noble cause!

There was a time when Hollywood made reverential movies about Christianity. But those days are long gone.
Now, Hollywood chooses to try to make movies that will make money instead.

And when someone finally makes a film that makes Christians proud,
he is run out of town.
That has never happened. Never, not once, not ever. You made that up. Who has been run out of town? No one, that's who. You're just making shit up.

Were it not for Mel Gibson, there would have been no "Passion of the Christ." But for every Harvey Weinstein who likes to bash Catholics, there is always someone else waiting in the wings to do the same.
So you've just decided to give up on the whole trying-to-make-sense thing? Yes, Mel Gibson made "The Passion." Was he run out of town? No! Even after his anti-Semitic, drunken rant he was not run out of town. The next sentence about Harvey Weinstein just doesn't follow. It's like a bad edit. I think you're running out of steam, better wrap this up.

Catholics were once the mainstay of the Democratic Party;
now the gay activists are in charge.
Which is why gay marriage has been legalized and "don't ask, don't tell" has been repealed. Oh, wait! neither of those things has happened! But if the gay activists are running the party with majorities in both houses and the presidency, you'd think. . . . oh never mind. If Bill says it it must be true!

Indeed, practicing Catholics are no longer welcome in leadership roles in the Party:
May I introduce to you Nancy Pelosi.
And John Kerry.
And Joe Biden.
Never mind, we've been over this already.

The fact that Catholics for Choice, a notoriously anti-Catholic front group funded by the Ford Foundation, has a close relationship with the Democrats says it all.
Catholics for Choice. Is Anti - Catholic. Catholics. . . . who are anti Catholic? How paranoid can you be? Why would the Ford Foundation waste its time and money trying to undermine the Catholic Church? Do you ever listen to yourself? Do you know how crazy you sound?

This goes on for a while, but seriously, I don't have the strength. You can read the whole crazy mess here if you're interested. I'm going to just skip to the end.

The culture war is up for grabs. The good news is that religious conservatives continue to breed like rabbits, while secular saboteurs have shut down: they're too busy walking their dogs, going to bathhouses and aborting their kids.
Okay, what decad is this? There are no more bathhouses! They were all shut down in the '80s during the AIDS panic. And what do you have against dog-walking? Catholics don't walk their dogs? Because they're too busy fucking all the time? (to make more Catholic babies, certainly not for any enjoyment!)

Are you sure you're not a Colbert show character? 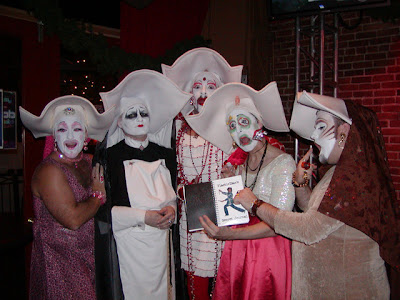