No matter what tragedy may occur, you can NEVER postpone a fundraiser!

Speaker John Boehner will host a cocktail party for the Republican National Committee at the same time that President Barack Obama will be addressing the nation at the memorial service for victims of the Tucson shooting.
Boehner turned down a Tuesday invitation from Obama to fly to Tucson with him, Minority Leader Nancy Pelosi (D-Calif.) and other lawmakers for the Wednesday night memorial service.
Another Boehner aide emphasized that the RNC reception was scheduled before the memorial event was set.

Oh, well. That's different. There's nothing you can do if your event was already scheduled. Except. . .

Separately, Armed Services Chairman Buck McKeon (R-Calif.) told reporters Wednesday that he canceled a meet-and-greet event Tuesday night for new members on the committee and the defense community because it would not be appropriate in light of the tragedy. Giffords is a member of the committee.

If you say to a normal person "President Obama made a speech yesterday at the memorial in Tuscon," a normal person will react something along the lines of: "Let's see what he said. Oh, that was a good point. Hmm, I disagree with that point. That was well said. That could have been phrased better, etc." Or you could just feed the information into the Malkin Machine.

The technology is a little complicated, but it the process is basically this: 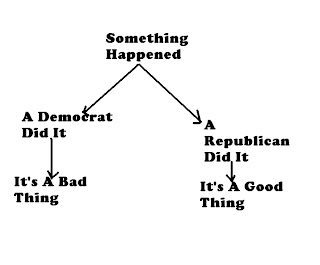 Which is how Michelle Malkin ends up trashing things like the President speaking at a memorial for 6 innocent victims.
Really.
Look:

"Bizarre Pep Rally?" It's actually shocking that she used the words "right speech," thge Malkin Machine must have a slight malfunction. But too late? Should he have given the memorial speech before the people were killed?
Boneheaded venue? Where should he have given it? Somewhere other than the site of the memorial? That would make sense.

President Obama used to preach that there was no “Red America” and no “Blue America,” just one America.
But tonight at the memorial for the Tucson massacre victims, it will be a sea of blue as the White House unveils the “Together We Thrive” logo and slogan.

Granted, "Together We Thrive" is a pretty retarded theme for what is basically a huge funeral, but seriously, you object to the logo being blue?


Update: As noted above, the University of Arizona announced the Together We Thrive event — and a few readers write in to say that the campus initiated the logo/campaign.

Hmmmmm. . . the U of A came up with the slogan and the logo. But still, it must somehow be Obama's nefarious doings.

. . . a few readers write in to say that the campus initiated the logo/campaign. Given U of A president Robert Shelton’s embarrassing, thinly-veiled partisan cheerleading for Obama tonight, it may indeed be a 100 percent-campus-initiated campaign. Given the Obama White House’s meticulous attention to stage prop details, however, I would say the odds of involvement by Axelrod/Plouffe & Co. are high.

Now, I seem to remember the headline to this "liveblog" thing including the phrase:

And yet, according to your account of the events, this happened:


Gov. Brewer takes the stage to polite applause and pays tribute to the victims. The shooting “pierced our sense of well-being.” Arizona’s hope “will not be shredded by one madman’s act of darkness.”
Brewer brings reverence and sobriety to the event, God bless her: We will go forward “in prayer, unbending and unbowed.”
And immediately, the sobriety is broken by massive whoops and hollers for Janet Napolitano.
Just. Gross.

(emphasis added by me)

I will agree with Malkin on one point, whoops and hollers for anyone are really unseemly at a memorial service. Just tacky and disrespectful to those who are in mourning. But why lie about Governor Brewer's reception? What the hell is the point of that?


Bottom line:
Speeches and leadership are not the same thing.
Obama delivered one tonight, but failed at the other over the past three days as Pima County Sheriff Dupnik, Democrat Party leaders, and media abettors poisoned the public square with the very vitriol the president now condemns.

See, now that's just being dishonest. What Sheriff Dupnik and others have said, and probably incorrectly in this particular case, is that the steady stream of hate and violent rhetoric from right-wing blowhards like, for instance, Michelle Malkin, can be dangerous in that it can inspire acts of actual violence. That's not vitriol. That is a condemnation of vitriol.

Also, why is it that when barack Obama speaks at a memorial he is politicizing the event, but when Jan Brewer speaks at the same memorial she is " bring[ing] reverence and sobriety to the event"?