We are ruled by sociopaths

Oh, capitalism! You are the best of all possible systems!


Yes, there's a new industry that has apparently sprung up recently. "Climate Services."
First, big business destroys the climate, poisoning the air we breathe and the water we drink for profit. Then, when the result of their "dark, Satanic mills" becomes impossible to ignore or pooh-pooh, more big businesses rush in to profit off of the misery the first group of businesses have caused.

Oh, and I suppose this little wrinkle should come as no surprise:


One of the industry’s leaders, a Silicon Valley executive named Rich Sorkin, made the case for climate services in May to the U.S. House Subcommittee on Environment. He argued that taking the big-picture climate science produced by federal agencies and turning it into hyperlocal threat assessments is a crucial and effective way for cities, states, companies and investors to better prepare for the climate emergency.


Yes, the data which these leaches intend to sell to whomever can afford it in order to accumulate more and more wealth? It's production is paid for by us, the American taxpayers.

Nothing, unless you are one of the super-wealthy who can afford to have this customized data delivered to you so that you know when to leave your Malibu beach house and head for your Aspen ski villa.

Sorkin suggested that his risk-focused climate company Jupiter is uniquely suited to take on this job. “We believe the federal government should defer to the private sector in this area,” he said in a statement.


Oh, really? What a fucking shock. You think the government should just stay out of the whole climate data business except for, you know, doing all the actual work of collecting all the data? That's what you think? Quelle surprise! Well, we believe that you, Rich Sorkin, should go fuck yourself!

Sorkin argues that companies like his—which is part of an industry that in 2015 was valued globally at US$2.6 billion with 6% to 10% growth per year—are nimble and innovative where government can be slow and cautious. “We’re years ahead of what the public sector is doing,” he says.
In his statement, he likened Jupiter’s impact on climate science to the disruptive influence of Amazon, Microsoft and Google on supercomputing: “In nearly every case, the private sector is leading the adoption of these new technologies, driven by brutal competition for profits.”

Yeah, does anyone NOT hate Amazon? And Microsoft?
Fuck, any time one of these little startup assholes uses any form of the word "disrupt," they're talking about fucking things up, putting existing companies out of business, throwing people out of work to stuff the bank accounts of a few greedy sociopaths.
Saying "we're going to do for this sector what Amazon, Microsoft and Google have done for theirs" is like saying "i'm going to do for your church group what Jim Jones and David Koresh did for theirs!"


And for companies like his, those profits can be lucrative. Jupiter’s clients include players in oil and gas, insurance and defense.


Even industry leaders acknowledge the risk of a not-so-distant future where the wealthy and powerful have better information and tools for protecting themselves from the devastation of climate change than the poor and vulnerable.
“That’s a huge concern, and I’m certainly not going to pretend that we have the solution,” says Emilie Mazzacurati, the founder and CEO of Four Twenty Seven


"That is a huge concern, and I'm certainly not going to pretend we have any interest in addressing it," said the comic book supervillain.


“Scientists were saying, ‘We knew this could happen,’” Mazzacurati says. “[There was] a disconnect between the available data and projections around risks from climate change and the fact that those were not systematically integrated for most organizations.”

Okay so let me see if I git this straight. Scientists have been sounding a warning on climate change for years. Corporate America made a point of ignoring those warnings for fear it might cut into their short-term profits.  -- I'm sorry, I mean they "failed to systematically integrate those projections." --
Now that Corporate America has done irreparable damage to the planet, they are not being punished, they are being given a chance to access inside information, for which we all paid, to be able to mitigate the damage their greed and callousness have caused. Oh, but only to mitigate the damage done specifically to them and their bottom lines. And there is now an entire industry dedicated to ensuring that they will be able to minimize the risks to themselves while still contributing to the incipient catastrophe. Have I got that right?


Mazzacurati founded Four Twenty Seven after Hurricane Sandy devastated New York City in 2012. “What struck me most was the chaos that [an] extreme weather event could bring to one of the wealthiest, most organized, most resourceful cities in the world—and some of its most powerful businesses,” she later recalled.

Won't somebody think of the powerful businesses?

See, this is the difference between us normal people and the sociopaths that run everything. Most of us saw the devastation of Sandy and thought "oh, shit! There are people suffering. People losing their homes. This is horrible." Someone like Emilie Mazzacurati sees the same footage we all saw and thinks "Damn, I'll bet those powerful companies would pay big bucks for some sort of protection from the next storm!"

The longer I live, the more I realize that the rich and powerful have a strong tendency towards sociopathy. And it makes sense. If you want to succeed in business, if you want to make it to the top, it helps to have no compunctions about who you have to stab in the back to get there. So it's easy for executives to lay off workers. It's easy for politicians to cut people's healthcare or food stamps. It's easy for Presidents and Secretaries of State to order bombings and invasions. Because they don't care. They have no empathy. Or not enough to stop them from doing whatever they think will benefit themselves and further their career goals.

Look how many rich and famous names are popping up in the Jeffery Epstein case. Why, if you are a wealthy powerful man, would you need to have Epstein secure underage girls for sex? You can probably have sex with tons of consenting adult women. Pretty ones, even. I think that a lot of the rich and powerful are seriously damaged, disturbed people. Especially if they were brought up by wealthy, sociopathic parents. 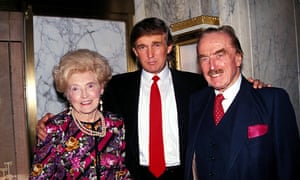 
Why would someone like, say Bill Clinton, commit rape?
At the time, I was naive enough to think that he wouldn't because plenty of women wanted to have sex with him so why would he have to force himself on anyone? Now, I get it. That someone like Bill Clinton, someone who can get lots of women into bed, is exactly the kind of person who would do this. Because when a Paula Jones or a Juanita Broderick says "no, thanks. Not interested," the reaction isn't "oh, well, there's a million women who will!" The reaction is "who do you think you are to say no to me?"

Honestly, the whole world makes a lot more sense once you realize that we are ruled by sociopaths.