Giving Them What They Want

Palin lashes out at `Family Guy'

JUNEAU, Alaska – Sarah Palin is lashing out at the portrayal of a character with Down syndrome on the Fox animated comedy "Family Guy."
In a Facebook posting headlined "Fox Hollywood — What a Disappointment," the 2008 Republican vice presidential nominee and current Fox News contributor said Sunday night's episode felt like "another kick in the gut."

Hey, Sarah. Do you know why "Family Guy" made a joke about Down Syndrome? To get attention. To try to shock and outrage people enough to get free publicity. Which you just gave them. Nice going.

"If the writers of a particularly pathetic cartoon show thought they were being clever in mocking my brother and my family yesterday, they failed," Bristol Palin added in the Monday posting.

Yeah, the writers of "Family Guy" gave up on clever a long time ago. See, when the show first came on the air, it was clever. And funny. And it did often push the limits of decency, but it did it while being laugh-out-loud funny, so it was hard to object. Then FOX cancelled it. But due to huge DVD sales and really popular re-runs on "Adult Swim," they brought it back.
But it was never the same. Probably because Neil Goldman had left to do "Scrubs." But for what ever reason, it just wasn't really that funny anymore. Self-impressed douchebag Seth MacFarlane had trotted out the painfully unfunny "American Dad" in the interim, which should have been a warning, but I digress.

The point is, all "Family Guy" really has left is the "shock factor." They got no funny left (did you see their Star Wars parody? As funny as a brick to the head) so all they can do is try to be more and more "outrageous" hoping that the Parents television Council types will give them enough negative publicity to attract curious new viewers.
No one ever seems to get this. It's "The Satanic Verses" principle. No one besides a few academics and literary critics would have read that book. No one else had ever read anything else Rushdie had done before. But the Ayatollah pitched a hissy fit of righteous indignation and suddenly everyone wanted to know what all the fuss was about. (In this scenario, you are the Ayatollah, Sarah)
Same thing with "Basic Instinct" or "The Last Temptation of Christ." The outrage was the only reason people wanted to see those movies. And the outrage industry never seems to get this. They never seem to get that their protests are the movie's best advertisement.
You know who does get this? Gossip Girl.

They put the negative comments right in their ads.

Honestly, if I were a publicist for FOX or Family Guy, I would run an ad like this: 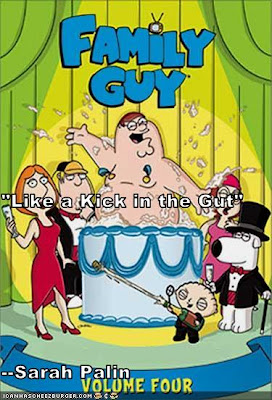 Seriously, all you're doing is giving them what they want.
Posted by Professor Chaos at 6:31 PM No comments: