Here's the problem with the Little Drummer Boy:  imagine your friend just had a baby. You go tot he maternity ward to visit. There's the new mother and the new father and the tiny little newborn baby, and you say "Gee, Bill and Susan, I didn't have enough money to get you a proper baby gift (I am a poor boy, too) but here is what I will do. I give you the gift of music." Then bang out a killer drum solo. How popular do you think you would be right then with Bill and Susan?
I don't claim to be any sort of baby expert, but here's what I do know about babies. They sleep. A lot. They really are just the laziest little people you'd ever want to meet. They sleep, they drink, and they pee themselves and cry. They're basically glorified winos. So the one thing that any parent of a newborn does not want is for someone to wake the baby. Because if he ain't sleeping, he's soiling himself and crying and no one wants that. Or he's reachin' for the boobies. Babies are freakin' obsessed with boobies! It's really just unseemly. Get over it babies, they're just boobies! Geez!
Anyway, if this kid came into the stable and started rum-a-tum-tumming on his little drum, Joseph would have thrown him out on his ear. And no way does the baby smile at him. I know he's Jesus, but still, he has his limits. 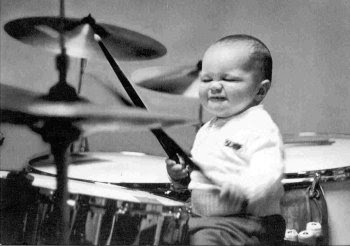 And baby Jesus is a way better drummer than you, anyway.
Here he is pounding out the solo from "Moby Dick"
2. Walking in a Winter Wonderland.

This is not, strictly speaking, a Christmas song at all. There is no mention of Christmas in the lyrics at all. (Why do they hate America?) But it is in heavy rotation around the Holidays, so I'm including it here. In the middle of the song there is this odd verse:

In the meadow we can build a snowman,
Then pretend that he is Parson Brown

He'll say: Are you married?
We'll say: No man,
But you can do the job
When you're in town.

Okay, first of all, what kind of dirty hippies address the parson as "Man?" When the parson asks you a question the answer is "yes, sir" or "No, Reverend"  you don't talk to a man of the cloth like he's one of your crazy beatnik friends. You show some goddamned respect!

Secondly, if you built a snowman and he asks you a question, I'm pretty sure that the proper response is "AIEEEE!!!! A Talking Snowman!!!!!" Then you run. Run like the wind and never look back. And don't stop running until you are home behind a locked door. And let's never speak of this to anyone.

Again, not strictly speaking a Christmas song. But I include it here because I want to say something to the male singer in this duet. NO MEANS NO!

Also, I think at one point, he slips her a mickey.

The neighbors might think - Baby, it's bad out there
Say, what's in this drink?

That's pretty suspicious. Sounds to me like he might have roofied her. And that's not in keeping with the Holiday spirit. Actually, there isn't any time of year when that would be acceptable. What the hell? Why is there a Christmas song about date rape? That's really horrible.

And on that note,

Or whatever you  young people celebrate these days.