And Now, A Message from Sarah Palin 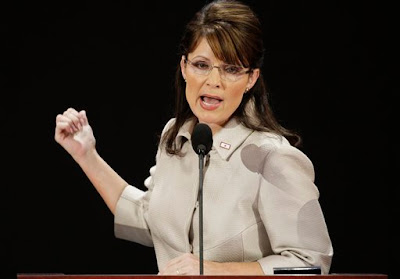 Hey, Jagoffs! Just because I've been mentioned a few times on this here blog-thingy doesn't mean I'm endorsing it. So when the "SarahPac" ads come up. I better not catch any of you lower-48 not-real Americans clicking on them. "Cuz every time you do, I gotta pay the Perfessor a couple of bucks.

Seriously, if you have any respect for me at all, you will not click on the SarahPac ads!

If I catch any of you clicking on the ads just to try and cost me money, me and one of my kids will hunt you down and gut you like this fuckin' moose! 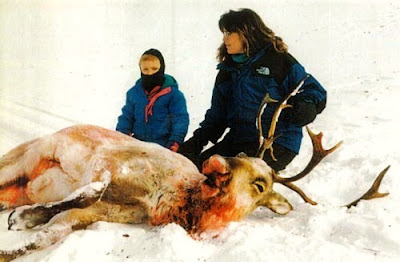 Yeah! That moose bitch won't be messin' with me any time soon!

You think I'm joking? I will quit whatever it is I'm doing at the time and come after you hardcore! You betcha! And I won't stop until you're dead, 'cuz I'm no quitter! 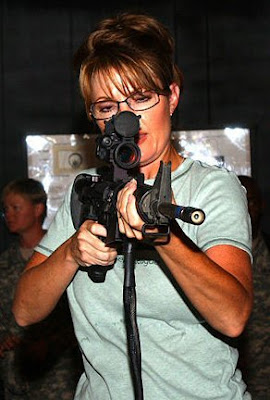 You feel lucky punk? Click on the ads for SarahPac! I dare ya! Make my frikkin' day!
Posted by Professor Chaos at 11:26 AM 1 comment:

Charles Krauthammer Gets Even Stupider

The Moon We Left Behind
How can we leave behind the wonder and glory of the moon?

Let's see, the country is in its worst financial crisis since the Great Depression, the deficit is projected to be around a trillion dollars, yeah, let's go back to the fucking moon! Let's spend a ton of money on another moon landing just because it was fucking cool the first time. That can't really be the reason, right? Krauthammer must have some practical reason for suggesting re-starting the space program, right? No. Not really.

Why do it? It's not for practicality. We didn't go to the moon to spin off cooling suits and freeze-dried fruit. Any technological return is a bonus, not a reason. We go for the wonder and glory of it. 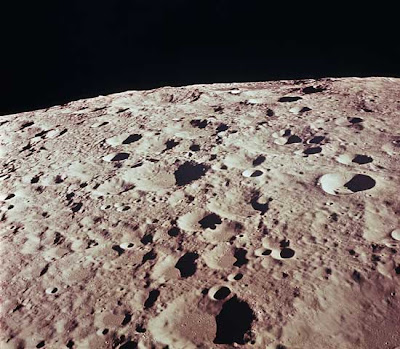 Ah, the wonder and glory of, um a dead hunk of rock in the sky?


Are you serious? A member of the far right is suggesting a massive federal government spending program and the only justification is the "wonder and glory?" Don't we have problems here on Earth we could better spend money on?

Don't we have problems here on Earth? Oh please. Poverty and disease and social ills will always be with us. If we'd waited for them to be rectified before venturing out, we'd still be living in caves.
Oh, touche' Charles! Um, one quibble. The difference is that moving out of caves and into houses with doors and locks meant a much higher degree of protection from wild animals and the elements, where going to the moon is just pretty fucking cool. Many would argue that safety is actually more important than being cool. In fact, pretty much everyone but you, the Fonz, and the guys from Jackass.

After countless millennia of gazing and dreaming, we finally got off the ground at Kitty Hawk in 1903. Within 66 years, a nanosecond in human history, we'd landed on the moon. We've done it with the most beautiful, intricate, complicated -- and ultimately, hopelessly impractical -- machine ever built by man: the space shuttle. We turned this magnificent bird into a truck for hauling goods and people to a tinkertoy we call the International Space Station, itself created in a fit of post-Cold War internationalist absentmindedness as a place where people of differing nationality can sing "Kumbaya" while weightless.
So the US space program is of vital importance, bu the International Space Station, well that's just a "tinkertoy" suited only for the singing of corny folk songs? Oh, yeah that makes sense.

The shuttle is now too dangerous, too fragile and too expensive. Seven more flights and then it is retired, going -- like the Spruce Goose and the Concorde -- into the museum of Things Too Beautiful And Complicated To Survive.
Who knew the caustic, venomous Charles Krauthammer was capable of waxing so poetic over a large piece of machinery?

Fourteen months from today, for the first time since 1962, the U.S. will be incapable not just of sending a man to the moon but of sending anyone into Earth orbit. We'll be totally grounded. We'll have to beg a ride from the Russians or perhaps even the Chinese.
Or we could grow the fuck up. The only reason we ever went to the moon was to show up the Russians. We could stand on the surface of the moon and shout "look what I can do!" like a playground showoff. What are we going to prove by doing it again?

Charles, go back to your science fiction comic books and dream of mating with Barbarella in zero gravity and stop embarrassing yourself in print.


Posted by Professor Chaos at 10:49 AM No comments: