Things that make sense in the Conservative Fantasy World

Oliver Willis tweeted a link to this offensive Op-ed in the Washington Moonie Times:

EDITORIAL: The Gay Scouts of America

And of course, it's pretty much what you would expect: Oh no, the mean old secularists are letting gay guys into our Boys-only neckerchief campout club!

Real Men Only Need Apply
But where it gets really crazy is in the comments section. That's where you can really see what a nightmarish fantasy world these righties have constructed for themselves.

Here is the first comment, which means this guy probably has one of those news alerts set up for the words "Boy Scouts" and "gay," for whatever reason:

We’ve all seen this movie before.

No, most of us haven't rented this one.

NAMBLA forces a venerable institution to violate its principles, with predictable results. NAMBLA forced the Roman Catholic Church to permit gay priests, and who could have foreseen the results when a gay man is let loose on a young, naïve boy with all its attendant disparity of power and persuasion in such a relationship?

Wow! So, in your weird little fantasy world, a) NAMBLA is an organization with power and influence, and b)The Catholic Church allows gay priests?

And when the inevitable scandals occur, is it NAMBLA that gets blamed, or its enablers in the culture and press? No. The institution itself gets forever slimed by the scandal and pays millions out of its treasury to cover the cases precipitated by the NAMBLA lobby years prior.


Yes, why would they blame the institution that has enabled and covered up this sexual abuse for decades?

And when a NAMBLA predator serially abuses boys at the Penn State football facility, is it the predator, or NAMBLA that everyone remembers as the villain?

No. It’s the institution itself – Penn State football – and its venerable, iconic pillar of morality in a sport awash in cheating and cutting corners, Joe Paterno. No one remembers the predator himself. Instead, everyone blames the coach and the institution, who had nothing to do with the predation itself.

Unless you count knowingly allowing the abuse to continue, but hey it's not like he paid the players or something really scandalous!

Good. I was so sick of people putting him on a pederastal!

Now, NAMBLA and its enablers of press, culture, and charity powerhouses,

Oh my God. Name one. Name one charity that has anything whatsoever to do with NAMBLA. Go ahead, I'll wait. . .
Yeah that's what I thought. Now maybe you can name anyone in the press that has ever given NAMBLA favorable coverage. . .
Now, NAMBLA and its enablers of press, culture, and charity powerhouses  force the Boy Scouts Association to violate its principles by forcing gay, adult leaders into the pup tents of twelve and thirteen-year old boys for overnight camping. What could possibly go wrong there?
Um, is there some way it could get worse? Have you not seen the news? Do a Google News search for "Boy Scouts" + "abuse." You'll see lots of stories like this:
California man sues Boy Scouts, alleging sex abuse occurred decades ago
Military Veteran Files Suit against Boy Scouts for Sex Abuse by Scout Master
Judge: Release More Boy Scout Sex Abuse Files
NBC 5 Dallas-Fort Worth - ‎Jan 30, 2013‎
A Minnesota judge on Tuesday ordered the handover of confidential national Boy Scout records on sexual abuse from 1999 to 2008 in a move attorneys said could add to the body of evidence showing that the organization failed to take adequate steps to protect young people from molesters in its ranks.

And when the inevitable scandals arise, will anyone blame NAMBLA or its enablers? Of course not.

Because the abuse has been going on for years before the imaginary "NAMBLA lobby" got the Scouts to accept its first gay member?
They’ll blame and scandalize the venerable Boy Scout institution, which will be forced to pay millions of dollars it doesn’t have to handle the court cases and the settlements to the boys who are abused by the NAMBLA scout leaders.
This is pure evil.
Yes, ending decades of discrimination, that's what is pure evil, obviously.
But I guess that makes sense to a right-winger, because they live in a fantasy world. Now I don't know why they would make their fantasy world so scary. In my fantasy world, I'm currently being coronated King of America and World Series MVP. But this is the world in which they have chosen, for some reason, to live. And in this weird parallel universe, things make sense to them that don't add up here in the reality-based world. In order to live in the right-wing fantasy world, you have to believe things like:
Martin Luther King, Jr. was a pinko commie subversive, and if he were alive today, he'd be an NRA-supporting Republican.
Mexican immigrants sneak into this country to get a free ride from the welfare state. And they're stealing our jobs! 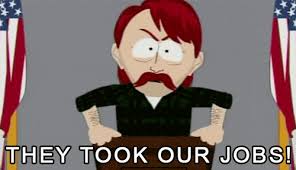 America is the strongest, greatest, most powerful country in the history of the world, and we're in constant danger of being completely destroyed by a handful of cave-dwellers with box-cutters!
And every human life is sacred and must be protected. Now let's bomb, bomb, bomb Iran!
Posted by Professor Chaos at 1:48 PM 2 comments: