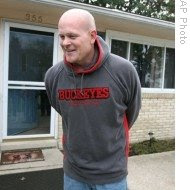 Apparently, there are some people not familiar with the principle of "ignore him and he'll go away." And some of those people work for a publication called "Christianity Today."

Since ol' Joe has proven to be such a font of wisdom when it comes to politics, someone over at C.T. figured, hey, I'll bet he's just as super-awesomely smart about theology! Let's ask Joe the Fucktard Plumber to interpret the Word of the Lord for us!

So, let's look at some excerpts from the interview, shall we?

Ah, I see. And what does ignorant, mouthbreathing redneck mean?

I've had some friends that are actually homosexual. And, I mean, they know where I stand, and they know that I wouldn’t have them anywhere near my children. But at the same time, they’re people, and they’re going to do their thing.

Who do you see as the emerging Christian leaders?

Ok, do you know what the word "emerging" means? James Dobson is Seventy-Three Years Old! He just stepped down as chairman of "Focus on the Family," the organization he founded in 1977! Dobson is an emerging leader? Wow! Even for you, that's stunningly ignorant!
Why does conservatism appeal to you as a Christian? Conservatism is about the basic rights of individuals. God created us.

Um, what do those two factoids have to do with each other? Can you elucidate a bit?

As far as the government goes, the Founding Fathers based the Constitution off of Christian values. It goes hand-in-hand. As far as the Republican Party? I felt connected to it because individual freedom should not be legislated by the federal government.

Now I'm even more confused. The government should not be legislating individual freedom? I can't even tell if that makes you pro- or anti-freedom!

Do you have plans to run for public office?

Yeah, and He won't. Really. There's an old expression: If you talk to God, that's prayer. If God talks to you, that's schizophrenia.

Really? God gave you the most vague instructions anyone has ever given to anyone? And God says, "Well, you know" ? Really? God talks like W? I don't think that's God you're hearing.

I feel more important to just encourage people to get involved, one way or another. If I can inspire some leaders, that would be great. I don't know if I want to be a leader.