The most pathetic, ridiculous person in the World!


I think she's the granddaughter or niece or something of part-time harpy and full-time H.P. Lovecraft character Phyllis Schlafly. When last I was aware of her existence, she was writing about the "War on Men" which frightened me a little until I realized that her extreme depths of self-loathing had simply driven her stark mad and of course there was no such war.

And more ridiculous than ever.

Men are now second-class citizens. And she's got proof!

The most obvious proof is male bashing in the media. It is rampant and irrefutable.

What I don't know could fill a dictionary!

It is rampant and irrefutable. From sit-coms and commercials that portray dad as an idiot to biased news reports about the state of American men, males are pounced on left and right. And that’s just the beginning.

Also the end!
You know, I will readily concede that a lot of sit-coms and commercials portray dads as bumbling oafs, and that is kind of annoying, although more annoying as lazy writing than as any kind of actual harm being cause to anyone, but I would submit that for every sit-com husband portrayed as a n incompetent boob there is a sit-com wife portrayed as a bitchy shrew, so I'm not sure that either gender really comes out ahead in that equation.

Never mind, we have a winner!
﻿

The war on men actually begins in grade school, where boys are at a distinct disadvantage. Not only are curriculums centered on girls’, rather than boys,’ interests, the emphasis in these grades is on sitting still at a desk.

Okay, first of all, the plural of curriculum is curricula, which I would think you would know had the grade school you attended been so totally focused on the interests of girls. Also, I had no idea that girls were so interested in readin' writin' and 'rithmetic. The girls I knew in grade school were more interested in playing kickball at recess and going home to watch cartoons, same as the boys, but I guess times have changed. Also, are you saying that sitting still at a desk is something that only girls are good at?


Plus, many schools have eliminated recess.

Which I thought was a result of budget cuts, but I guess it could be part of the vast anti-boy conspiracy?

many schools have eliminated recess. Such an environment is unhealthy for boys, for they are active by nature and need to run around.

Um, have you ever met any girls? they run around all the time. I know my nieces sure as hell did when they were little. You know, it's not usually girls that have to be pried away from World of Warcraft and Cool Ranch Doritos to be forced to spend one goddamm minute out in the fresh air and sunshine.

So active by nature!
﻿

they are active by nature and need to run around. And when they can’t sit still teachers and administrators often wrongly attribute their restlessness to ADD or ADHD. The message is clear: boys are just unruly girls.

Um, that may be the least clear message I have ever heard. How are boys unruly girls? If girls become unruly enough, do they become boys? Do ADHD medications turn boys into girls?

Things are no better in college. There, young men face the perils of Title IX, the 1972 law designed to ban sex discrimination in all educational programs.

Um, I went to college in the late '80's. And most of the '90's. (I wasn't the best student), and I don't remember facing any peril of any kind, certainly not from Title IX. I somehow managed to get through my entire college career on several campuses without ever being put in peril by the women's basketball team. 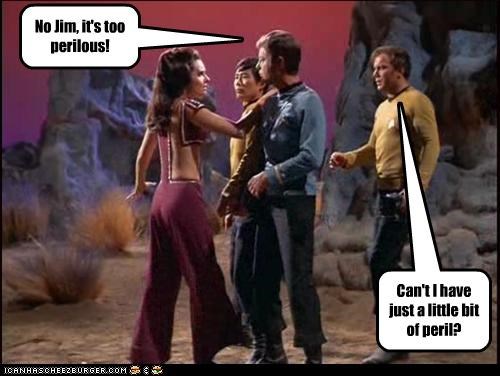 Okay, let's pretend that that's how Title IX works, since you clearly have no idea how it does work, is that really what you consider "peril?" Really? 'Peril?" The University cancels ice hockey? Oh, no! How will men survive? I mean, you do know what peril means, right?

1 : exposure to the risk of being injured, destroyed, or lost : danger


Anyway, up to this point, Venker's article is really just silly. But fasten your safety belts, it's about to get horrifying:

Title IX is also abused when it comes to sex. In 1977, a group of women at Yale used Title IX to claim sexual harassment and violence constitute discrimination against women

Genuine harassment and violence should be punishable offenses, obviously.

Whoa! Whoa! What are you trying to do, get fired by FOX?

Genuine harassment and violence should be punishable offenses, obviously. But the college campus is a breeding ground for sexual activity, which makes determining wrongdoing (and using Title IX to prove it) extremely difficult.

Actually, it's pretty easy to determine wrongdoing. In the real world where the rest of us live, it's incredibly easy to distinguish between, say, consensual and non-consensual sexual contact. If you're having difficulty, just find a normal person and ask her.

Sexual misconduct does not necessarily constitute harassment—and women have as much of a role to play as men do.

Oh, wait. I get it now. You're one of those people. Those people who consider any non-,marital, non-procreative sexy funtimes "sexual misconduct." So for you, I guess it would be difficult to assess who is to blame for a consensual hook-up. It's just that the rest of us don't see a need to assign any "blame" for a consensual encounter. For non-consensual sex, assigning blame is really really easy.

Here again men are in an impossible situation, for there’s an unspoken commandment when it comes to sex in America: thou shalt never blame the woman. If you’re a man who’s sexually involved with a woman and something goes wrong, it’s your fault. Simple as that.

Um, are you at all familiar with the internet? Because if you are, may IO recommend that you go to any news story that concerns abortion, contraception, or sex at all and scroll through the comments. See how long it takes you to find the "stupid slut should have kept her legs shut" section. Should take about 7 seconds, especially at your employers' site.

Also, what kind of a sick fuck refers to rape or sexual assault as "something goes wrong?"

Now I'm sure you're probably all thinking at this point that Venker has hit rock bottom. Keep digging!

When men become husbands and fathers, things get really bad. In family courts throughout America, men are routinely stripped of their rights and due process. The Violence Against Women Act (VAWA) is easily used against them since its definition of violence is so broad that virtually any conflict between partners can be considered abuse.

If a woman gets angry for any reason, she can simply accuse a man and men are just assumed guilty in our society,” notes Dr. Helen Smith, author of the new book, "Men on Strike." This is particularly heinous since, as Smith adds, violence in domestic relations “is almost 50% from men and 50% from women.”

Who the fuck is Helen Smith? How are there two of these women? I would have thought you'd be hard pressed to find ONE woman to be an apologist for domestic violence. There are TWO?  I am shocked!

Shocked? If so, that’s in part because the media don’t believe men can be victims of domestic violence—so they don’t report it. They would rather feed off stories that paint women as victims. And in so doing, they’ve convinced America there’s a war on women.

And sure, the media would NEEEEEVER report on men being victims of domestic violence! You know how they hate a man bites dog story like that!

Lionel Richie's Wife Beat Him Up After Catching Him Cheating

Yet it is males who suffer in our society. From boyhood through adulthood, the White American Male must fight his way through a litany of taunts, assumptions and grievances about his very existence. His oppression is unlike anything American women have faced

You know, I gotta think Mr. Venker's got it pretttty sweet.

Hon, what time are you going to be home?
Goddammit, Suzanne, stop oppressing me!
Oh, I'm sorry you're right. I'm so darn insensitive to your plight!


Um, Honey, whose undies are these I found in your car?
Oh, here we go! I guess I'm just a second-class citizen around here, right? Society just automatically assumes I'm guilty!
Oh, I'm sorry, dear. You've obviously suffered enough. You go ahead and bang whomever you like if it will help make up for the hurt that womankind has heaped upon your people lo these many years.

Ladies and gentleman, presenting Suzanne Venker.
The most pathetic ridiculous person in the world!