All across the nation, literally dozens of angry, misinformed dimwits are staging "tea parties" to protest policies which they don't understand. These differ from the original Boston Tea Party in that the colonists who staged the original protest boarded British ships under cover of darkness to destroy British cargo, denying tax dollars to the English monarchy, knowing that they risked their freedom, if not their lives, by displaying defiance in the face of the British Empire, while modern "teabaggers"* buy bags of Liptonat the supermarket and then throw them into trashcans. 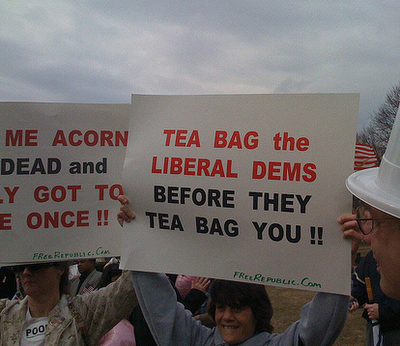 Um, I don't think that word means what you think it means.

One of the most popular activities at these "tea parties" is threatening to "go Galt" This refers to the fictional character John Galt from the book Atlas Shrugged. Look, guys, I read the book, and if someone were to edit out about 100 pages of repetition, it would be a decent work of fiction. But Ayn Rand is like the Jimmy Stewart character in "Rope." Her ideas may be fun to bandy about at cocktail parties, but you don't try to actually put them into practice. (In the case of the character from Rope, because you will end up in jail for committing murder. In the case of Ayn Rand, because her ideas are stupid.
Since most of you teabaggers have apparently not read it, let me explain something to you. John Galt was an titan of industry who bestrode the world like a colossus. You, on the other hand, are, um, not. Honestly, if you "went Galt," if you stopped producing out of spite, no one would notice - except your kids who would ask why there is no money for food. 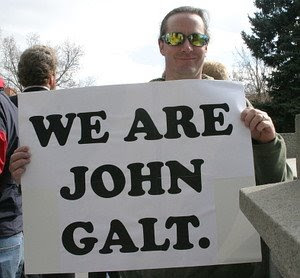 No. You are not. Really.

The people who would, theoretically, be in a position to "go Galt" um, they're in Wahington begging for government handouts.

And if anyof you don't feel like slogging through all 1084 pages of Ayn Rand's diatribe, lhere's how it ends. John Galt and the other wealthy industrialists all move to a deserted valley in Colorado and start their own society, building new railroads, factories, etc. Does that sound like something you could do? 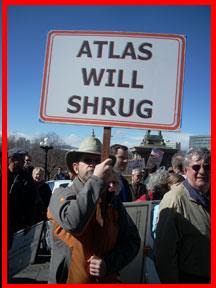 You are not Atlas. If you shrug, the world will shrug back. Unless you are really going to drop out of society and start your own country, just shut up and go back to work.

Oh, and do a google search for the term "teabagging." You'll be glad you did.

*I swear to God, this is really how they refer to themselves.
Posted by Professor Chaos at 9:03 PM No comments: