Guess who's out of jail and making bullshit movies again?

If you guessed self-righteous adulterer and creepy version of Mr. Bean Dinesh D'Souza, give yourself five points! 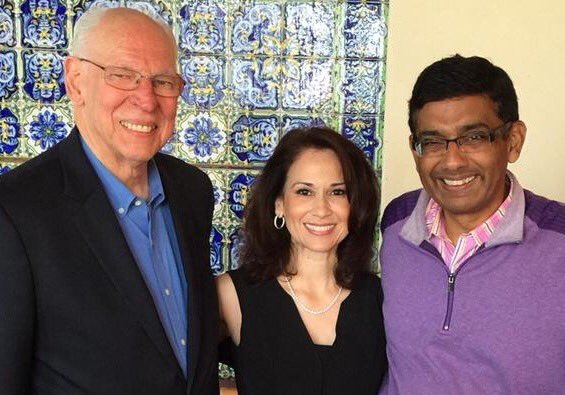 NEW YORK – Conservative filmmaker and bestselling author Dinesh D’Souza has given WND permission to make public the trailer for his new feature film, “Hillary’s America: The Secret History of the Democratic Party.”


Wow, he's given you permission to give him free publicity for his upcoming movie? What a get!


And you know it's some honest film-making because the trailer begins with D'Souza pretending he was sentenced to Oz for campaign finance violations.

And that he was sent to jail not for having committed a crime, but because the Obama Administration wanted to "shut him up." I mean, yeah, pretty much everyone wishes you would shut up, Dinesh, but that's not why you were jailed. You actually, literally committed a crime, don't pretend like we don't know this.

White Southern racists used to vote for Democrats because they couldn't forgive the Republicans for being the party of Lincoln. Then LBJ signed the Civil rights Act, Nixon came up with the "Southern Strategy" * and Strom Thurmond led the racist Exodus from the Democratic Party to the GOP. Everyone already knows this. This is not a "secret" history.

Also, it's a little hard to portray the democrats as the party of the Klan when the Klan has just endorsed Republican front-runner Donald Trump.

And it ends with the question "what if their plan is to 'steal' America?" And in this context, I guess the word "steal" means "get elected to public office by the voters? And then govern?


The trailer is scheduled to debut officially Saturday at the Conservative Political Action Conference (CPAC) in Washington, D.C., as part of D’Souza’s presentation on a panel.

Ahh, CPAC! The Cannes of bullshit!

“The Democrats at their national presidential nominating convention in Philadelphia will be meeting in July to put out their official story of the Democratic Party’s role in American history, and we will be opening in theaters across the country to put out the counter-narrative – namely, the truth,” D’Souza told WND in an interview Thursday.

Theaters across the country! And by "theaters," we of course mean church basements, VFW halls and multi-purpose rooms rented out by the College Republicans.

Anyway, there's probably more we could get into, but the computer is acting up agai. Let's just say that if any of you are members of the Democratic Party, enjoy it while you can. Because Dinesh D'Souza is going to blow this party out of the water!


*Technically, I think Kevin Philips came up with the Southern Strategy on Nixon's behalf, but I don't like to quibble.