Debbie Schlussel Goes WAY Beyond Just Being the Crazy Lady 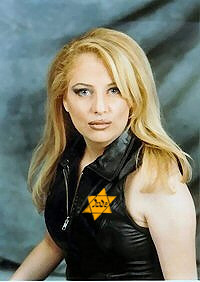 Debbie Schlussel, part time leather sheriff, full-time racist, has gone beyond being just the "Crazy Lady" and is now into full-blown horrible, awful hate-gasm mode. Her latest target? Lara Logan. Yes, that Lara Logan. The one who was beaten and sexually assaulted in Cairo. Here's Debbie's loathsome take on the incident:


Of course I don’t support “sexual assault” or violence against Lara Logan, and I said that nowhere here.. . I did say that it warms my heart when reporters who openly deny that Islam is violent and constantly promote it get the same kinds of threats of violence I get every day from Muslims. Because now they know how it feels. Lara Logan was among the chief cheerleaders of this “revolution” by animals. Now she knows what Islamic revolution is really all about.

Oh My God!!! That's about as disgusting a thing as I have ever read.It's not even worth going over the ways in which she is wrong (ie this is NOT an "Islamic Revolution") Is she really saying that it warms her heart that Lara Logan was viciously attacked?

Yes, I think that is what she is saying:

As I’ve noted before, it bothers me not a lick when mainstream media reporters who keep telling us Muslims and Islam are peaceful get a taste of just how “peaceful” Muslims and Islam really are. In fact, it kinda warms my heart.  Still, it’s also a great reminder of just how “civilized” these “people” (or, as I like to call them in Arabic, “Bahai’im” [Animals]) are:

Yeah, not only does she want to be sure that everyone understands how much enjoyment she gets from a woman she disagrees with being brutally attacked, she also wants to emphasize her position on Muslims: they are animals, not human beings, they are uncivilized, etc.

Sean Hannity Approves!
Also, Debbie Schlussel has suffered exactly the same sort of vicious crimes on a daily basis, so don't expect any sympathy from her!

In the crush of the mob, she was separated from her crew. She was surrounded and suffered a brutal and sustained sexual assault and beating. . . She is currently in the hospital recovering.

Hey, sounds like the threats I get from American Muslims on a regular basis. Now you know what it’s like, Lara.

No, she's not kidding. Being beaten and assaulted to the point of needing hospitalization is pretty much exactly like getting a bunch of nasty comments in your in-box. Debbie Schlussel is basically being beaten and raped EVERY DAY! So quit your whining!


There will be no further comment from CBS News and Correspondent Logan and her family respectfully request privacy at this time.

I just love it when the people of the profession of “the public’s right to know” suddenly want “privacy.” Tell it to your next interview subject, Lara.

Because interviewing someone is exactly the same as rape!


So sad, too bad, Lara. No one told her to go there. She knew the risks. And she should have known what Islam is all about. Now she knows. Or so we’d hope. But in the case of the media vis-a-vis Islam, that’s a hope that’s generally unanswered.
This never happened to her or any other mainstream media reporter when Mubarak was allowed to treat his country of savages in the only way they can be controlled.

In fact, no crimes at all were ever committed against  anyone for the last thirty years. Ah, the miracle of authoritarian despotism!

Oh, and in case you missed it, Debbie wants you to know that Muslims are all animals.

Of course CBS has no further comment. Wouldn’t wanna impugn the “peacefulness” of “Religion of Peace” animals, would we? Now, if they were Christians or Jews, well, then there would be comments galore.

Of course, if they were Christians or Jews, this would never have happened! No Christian or Jewish man has ever beaten or molested a woman! Only those swarthy Muslims do that!
So I'm guessing Deb must be getting a lot of complaints about this diatribe?

I’ve received many moronic insults and threats of violence from the left in the hours since I posted this, showing me more and more that there is very little difference between the left and the dominant, violent, fanatical forces in Islam. In fact, there’s really no difference at all.

Absolutely no difference between, say the Taliban beheading an infidel and some internet person calling a blogger a "stupid c**t."

My favorite part of all of the responses is their common claim that the “real rapists” of the world are white males and American soldiers. Uh-uh, you keep telling yourself that, as you live here under the protection of American soldiers. Riiiight–It’s not Muslims who don’t respect women and treat them as baby factories, sex toys, and property. It’s America and the West. You keep tellin’ yourself that, morons.****

(no, I don't know what those little symbols are after the word "morons.")


Right! No one has ever been raped by an American soldier! Or any other white males for that matter! Fundamentalist Christians have nothing but respect for women! Only Muslims do bad things.


How fitting that Lara Logan was “liberated” by Muslims in Liberation Square while she was gushing over the other part of the “liberation.”
Hope you’re enjoying the revolution, Lara! Alhamdilllullah [praise allah].

Alhamdillullah [Praise allah], Islam Fan Lara Logan Gets a Taste of Islam
I feel duty-bound at this time to point out that  Debbie Schlussel is apparently considered to be a respectable commentator by the scumbags at FOX

In the world of FOX, Debbie Schlussel is a "Conservative Commentator" and a "conservative columnist." So, essentially FOX is saying that this kind of hatred, racism and plain old-fashioned evil are "conservative." If I were a conservative, I think I would be offended.
Posted by Professor Chaos at 6:50 PM 14 comments:


Mr. Obama immediately cheapened the medal by awarding it to Angela Merkel and George H.W. Bush.


Posted by Professor Chaos at 4:59 PM No comments: