Well this should accomplish, um, something?

Brief Description – Sarah Palin called the Obama Administration’s actions as the “Road to Ruin”! Like most of the USA now, we at Stand Up America think it is a great way to express yourself and learn what is really happening to our country, so what can we do?

I'm sorry, my mother was an English teacher.

so what can we do? Well, it seems the normal methods do not work because of entrenched political machinery, moneyed interests, power seeking for power’s sake, and a media that is just plan in the tank. In the past, petitions were signed, marches on Washington and elsewhere were held, Tea Parties were created, letters were written, calls were made, new representatives were elected, yet, the road to ruin is still there. . .

We've held rallies and signed petitions, and that black guy still insists on being president! It's crazy! How could anyone not give in to the demands of protesters? It's unheard of! 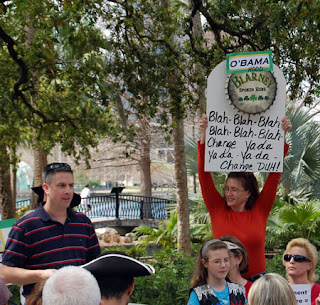 So how do we make our voices known? How do we finally succeed? How do we send a clear message that cannot be twisted by the media, misinterpreted by politicians, or co-opted by Obama apologists? Well, we have come up with one interesting new way. Are you game?

It won’t cost you any money short of a gallon of gas. It won’t take much of your time, only about an hour. It won’t mean travel to distant cities. It won’t mean crowds to wade through, and it won’t interfere with your life too much.
What it will be is FUN, and a great way to vent your frustration, without being labeled, or maligned!

Fun? Why, I love fun! Especially in all caps!


Here is what is planned:
• Sunday, March 13th, 2011 – 4 PM Eastern, 3 PM Central, 2 PM Mountain, and 1 PM Pacific time;
• We want everyone to get into their cars, trucks, motorcycles, RVs, Semis, box trucks, and any other vehicle, and drive to your nearest highway or main route;
• Don’t go far, just enough to get in a safe position to pull over to the shoulder, and park, engine running, headlights and flashers on;

All right! Wait, what? How is that fun?

• Hook up a boat trailer, a snow mobile hauler, or anything to make the line look miles and miles long, bring your tractor-trailer;

Well, I do enjoy being deceptive.

• Get your car club involved to show off those great hot rods and collectibles;
• Imagine others driving by wondering “what the heck”? Wave to everyone;

Sitting in an idling car AND waving? Do I dare? Won't people wonder "what the heck?" (with the question mark inside the quotation marks)

• Get ten friends to do the same; or go to an over pass and hang temporary signs saying – “Time to stop!” Just imagine the imagery! But be SAFE!

• Once pulled over to the side, place calls or texts to your friends, take pictures, send tweets, flood Facebook with messages and photos, along with several million others on other highways across the land.

• Stay one hour if you can, get your friends to do the same, line up all your vehicles in a safe manner as far off the side as you can, and hit your horns.
• One hour gives the media a chance to react, a chance to get footage. Imagine the traffic reports!

Yes, I imagine they would go something like this:
"Tom, traffic seems to be slowing on I-85 as drivers are wondering why these three morons keep hitting their horns for no reason, and why they are all pulled over on the shoulder. Probably drunk. Back to you, Tom."

• Hang a sign inside your back window, or use temporary soap to write a message safely on the window;
• Be a part of millions of people saying: “Stop the madness, we are pulling over and just stopping!”
Imagine the image, when every news outlet in the USA must take notice.

Yes, there's no way the media could possibly ignore several cars pulling off to the side of the road. That's certainly something you don't see every day!


Helicopters recording the event, YouTube filling with videos from every spot in America, with one message: “Just Stop”! Imagine seeing 300 cars pulled over for miles in California, in Texas, in New Jersey…etc.

Do the math. If a car is 17 feet long, and 10 feet is maintained between each vehicle, it takes only 195 cars to stretch one mile. Imagine 500 tractor trailers pulling over for one hour! That’s over seven miles!

Now imagine 500 blue whales swimming in a row, that's over 50,000 feet of whales!
Or what if everyone rode an elephant and pulled the elephant over on the side of the road? They sure couldn't ignore that!
Who the hell came up with this hot mess of an idea? 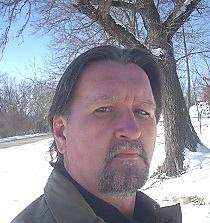 Born and raised in central Iowa we now reside in the beautiful timbered countryside of the western region of the state.

If you want people to follow your lead, using the royal "we" is good start!

So are you sure that this sort of thing is legal?

Stand Up America does not condone breaking any laws, period! If its illegal, DO NOT DO IT!
We have stated from the start, that if it is illegal do not do it, if you are uncomfortable with it, don’t do it, but it is not illegal to pull off to the shoulder of a highway to attend to any emergency you may have, or for any reason you feel you cannot continue to operate safely in a travel lane!
[emphasis in original]

So it sounds like, since there is no emergency, this action would in fact be illegal.

Ostensibly, you are not supposed to pull to the shoulder of a super highway for anything other than an emergency, a breakdown, or any other issue that prevents safe operation in the travel lanes. However, after consulting California Highway Patrol officers, they did say, if ordered to move along, you must obey or face arrest, but they are not going to arrest you for pulling over alone!

And everyone knows, if you don't get arrested, it's not illegal!

Its called ‘civil disobedience’ only after you fail to comply with a legal order from a police officer. Prior to that, it is just you pulling over for a reason you deem necessary.
[emphasis in original]

It's only illegal if a cop sees you do it?

Hmm, you know I'm starting to think this "Stand Up America" might be a bunch of kooks!
Posted by Professor Chaos at 7:22 PM 2 comments:

I saw this story on Ravings of a Semi-Sane Madwoman.

A proposed Tennessee law would make following the Islamic code known as Shariah law a felony, punishable by 15 years in jail.

That's taking it to a new level! The law is not against forcing Sharia Law on someone. The law would forbid anyone from following Sharia Law themselves. Besides the fact that this is the most blatantly un-constitutional law since the Defense of Marriage Act, how exactly would you hope to enforce this?

Hey, you! I saw you not committing adultery! You have the right to remain silent!

Say, I noticed you didn't steal anything from that store. You're not adhering to Sharia Law, are you? Oh, the 10 commandments? I guess that's okay, then. But I'm watching you!

State Sen. Bill Ketron, R-Murfreesboro, and state Rep. Judd Matheny, R-Tullahoma, introduced the same bill in the Senate and House last week. It calls Shariah law a danger to homeland security and gives the attorney general authority to investigate complaints and decide who's practicing it.

Yes, the threat to Homeland Security is not people who want to blow things up and kill people, it's folks following their religious beliefs. And what sort of crazy beliefs are included in Sharia? Well, there's this:

Haraam behavior is explicitly forbidden. It is both sinful and criminal. It includes all actions expressly forbidden in both the Old Testament and the Qur'an. Violating any of the Ten Commandments is considered haraam. Certain Muslim dietary and clothing restrictions also fall into this category.

So not killing would be a felony. Not stealing, a felony. Honoring your parents? you're looking at hard time!

[The proposed law] exempts peaceful practice of Islam but labels any adherence to Shariah law — which includes religious practices such as feet washing and prayers — as treasonous. It claims Shariah adherents want to replace the Constitution with their religious law.

So you're free to practice your religion peacefully, so long as I don't catch you washing your feet! That's just straight-up treason!

I'm not sure where these idiots got the idea that you can pass a law forbidding the practice of one's religion. Maybe they don't teach the Bill of Rights in Tennessee. (Except the second Ammendment, of course)

This is How The Gays Recruit Our Young People 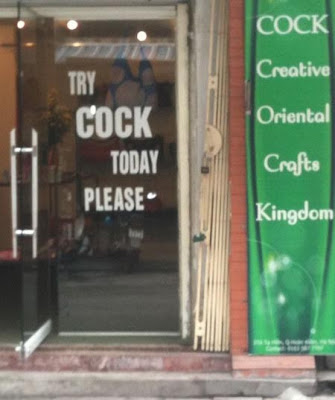 I've almost fallen for this so many times!
Joke's on them though, 'cuz they lose a lot of lesbians that way!
For the record: No, I don't believe that gay people "recruit" kids. And if they did, it wouldn't work, just like it doesn't work to try to "convert" gay people to breeders. Also, if someone did "turn gay" I wouldn't care.
Posted by Professor Chaos at 5:20 PM 1 comment: