They are going to steal this election.

Or at least, they are going to try.

They are doing everything they can to keep people from voting.

Remember the guy that got caught throwing out registrations?

Now Absentee ballots are being thrown out in Florida:
In Volusia County, officials have already thrown out 153 ballots, because the signature on the ballot did not match the one on the registration card.

“To be told my signature didn't match, it was a shock,” said voter Bill Archer.

Archer registered to vote in Volusia County 30 years ago.  He’s since had multiple strokes and now has to sign with his left hand instead of his right hand, and his signature now looks nothing like it used to.


Ohio's secretary of state first tried to have early voting only in Republican districts, then eliminated it all together. Then refused to comply with a court order to restore early voting and then everyone kind of got tired of that story, so who knows what eventually happened?

And "True the Vote" has somehow gotten their members installed as election officials.
True the Vote and its affiliated Ohio organization, the Voter Integrity Project, have signed up as observers at polling places Tuesday in various precincts across the state.

Chapin worries about the reliability of voter information the groups may have. Earlier this fall, the Voter Integrity Project unsuccessfully tried to remove dozens of Franklin County voters from the rolls that members said were improperly registered.


Tim Burke, Hamilton County elections director, said, “We know that the Voter Integrity Project has recruited and through the (Hamilton) County Republican Party has placed some poll workers


And these right-wing "poll watchers" are going to be eeeeeeeeverywhere.

Documents from a recent Romney poll watcher training obtained by ThinkProgress contain several misleading or untrue claims about the rights of Wisconsin voters. . . . One blatant falsehood occurs on page 5 of the training packet, which informed poll watchers that any “person [who] has been convicted of treason, a felony, or bribery” isn’t eligible to vote. This is not true. Once a Wisconsin voter who has been convicted of a felony completes his or her sentence, that person is once again eligible to vote…. On page 3 of the packet, Romney poll workers were instructed to hide their affiliation with the campaign and told to sign in at the polls as a “concerned citizen” instead.

Broward is a Democratic stronghold that Barack Obama is expected to carry by a large margin. But initial early vote totals reported by the office of the Broward Supervisor of Elections changed on Sunday, in some cases dramatically, causing some to question the numbers.

An analysis of the unofficial totals by early voting location on the Broward Supervisor of Elections website from Saturday, compared to the tallies posted on Sunday, shows that in one location, the E. Pat Larkins Community Center, located on Martin Luther King Blvd. in Pompano Beach, the revised totals showed 1,003 fewer votes. The initial tally reported from the polling place in the heavily black neighborhood showed 2,945 votes, but the revised tally was 1,401. Across the 17 Broward polling locations, 15 saw their vote totals revised, mostly by minute amounts of between 1 and 7 votes. But the three more significant changes, including the addition of 398 votes in Tamarac (a racially mixed community) and adding 99 votes to the totals from Pompano Beach City Hall, whose demographic is majority white.


They are going to steal this election. Everybody needs to go out and vote, we can't let it be close enough to steal.

The less relevant you become, the wackier things you have to say

Because no one gives a shit about Rudy Giuliani anymore, this:


Rudy Giuliani: 'This is a worse response


"Right now is doing a terrible job of disaster relief in my city, but no one is talking about," said Giuliani. "People don't have water, they don't have food, electricity and his FEMA is no where to be found. This is a worse response than Katrina."

"They are still finding bodies in Staten Island," said Giuliani. "People are yelling and screaming, 'How does the president get all this praise for disaster relief? How does Gov. Christie give him all this praise?' He's doing a terrible job with disaster relief," said Giuiliani. "This is a much worse than it used to be under President Bush."


I never understood the whole Giuliani thing. He was mayor of New York when 9/11 happened. That's pretty much it. Obviously, you can't put any of the blame for 9/11 on Giuliani, but I never understood how hw got to be considered some sort of hero either. What did he do? It's not like he ran into the burning buildings to rescue people. 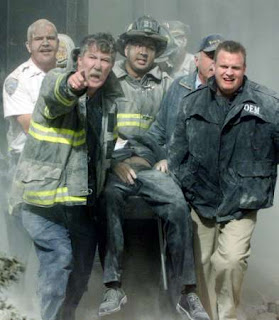 None of these guys are Giuliani.

But somehow, people started referring to him as "America's mayor," and he built his entire campaign for president on the fact that he was mayor when something awful happened. It never made any sense to me.
But now, no one  cares about him any more, so on the rare occasion that someone sticks a mic in his face these days, he has to say something like that. Something so ridiculous that it's bound to get noticed. Something that might help him book another couple of appearances on FOX.

Pathetic1
Posted by Professor Chaos at 7:52 PM No comments: