More reasons why Blue Bloods is the worst show on television


I guess now would be a good time to answer the question that, so far, you all have been too polite to ask. "If you know these shows are so terrible, why do you watch them?" Well, I don't. See, ny wife suffers from insomnia and the way she is able to get to sleep is to have the tv on in the background while she drifts off. And she isn't going to watch anything good while going to sleep. She needs shows that have enough story to occupy her mind just a bit, but are bad enough that she doesn't feel like she wants to stay awake to see what happens. And boring enough to help her drift off to dreamland. So I see bits and pieces of these bad shows. It's the price you pay for being married to a superheroine whose super power is that her brain never shuts off.


So, now that that's settled, let's talk some more about Blue Bloods.

If you have Netflix, it's worth watching the first like 6 minutes of Season One Episode One just to witness the incredibly ham-handed exposition. Because this show absolutely does not trust its audience to figure anything out on their own or to have the patience to wait to find out.

So, to begin - for some reason, it is very important for viewers to know that the show takes place in New York City. So the cold open begins with a montage of New York City sights like the Statue of Liberty. And in case anyone out there doesn't get it, the montage shows over the sound of Sinatra's "New York, New York." Just to be sure everyone is on the same page.

The opening scene takes place at Will Estes' character's graduation from the police academy which is treated like he's graduating from West Point or something. Like, is graduating from the police academy that big a deal? Is anyone impressed by this? It's trade school. Have you seen some of the lunkheads that are cops in New York? They all graduated from the academy. No one should be impressed by this accomplishment. 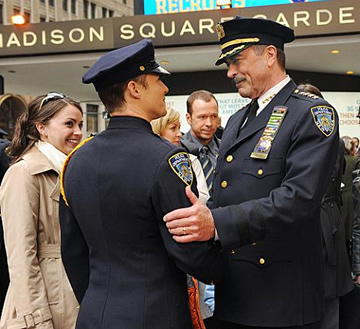 After the ceremony, featuring Tom Selleck's fawning, unctuous, self-congratulatory speech, the family meets outside. And here comes the exposition. Donnie Wahlberg tells Will Estes "Mom is probably spinning in her grave, knowing you dropped out of law school to become a cop."(Paraphrasing) Because how else would you know that Tom Selleck is a widower, and that his youngest son is super smart? Wahlberg contiues "now you're just a cop like every other member of the family." Just so you get that this is a family made up entirely of cops. His sister says something like "except me," and Wahlberg puts his arm around her (so there's no doubt to whom he is referring) ans says "oh, that's right. We got a district attorney in the family!" Because it's not like you're going to wait until there's a scene where she's prosecuting a case to figure out what she does for a living.
Oh, and the family? The family of heroes at the heart of this drama? Their surname is Reagan. In case you had any doubts about the show's political p.o.v. 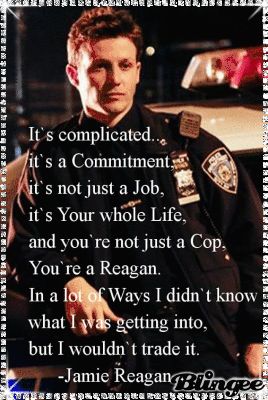 Oh, and family is super important to this show. 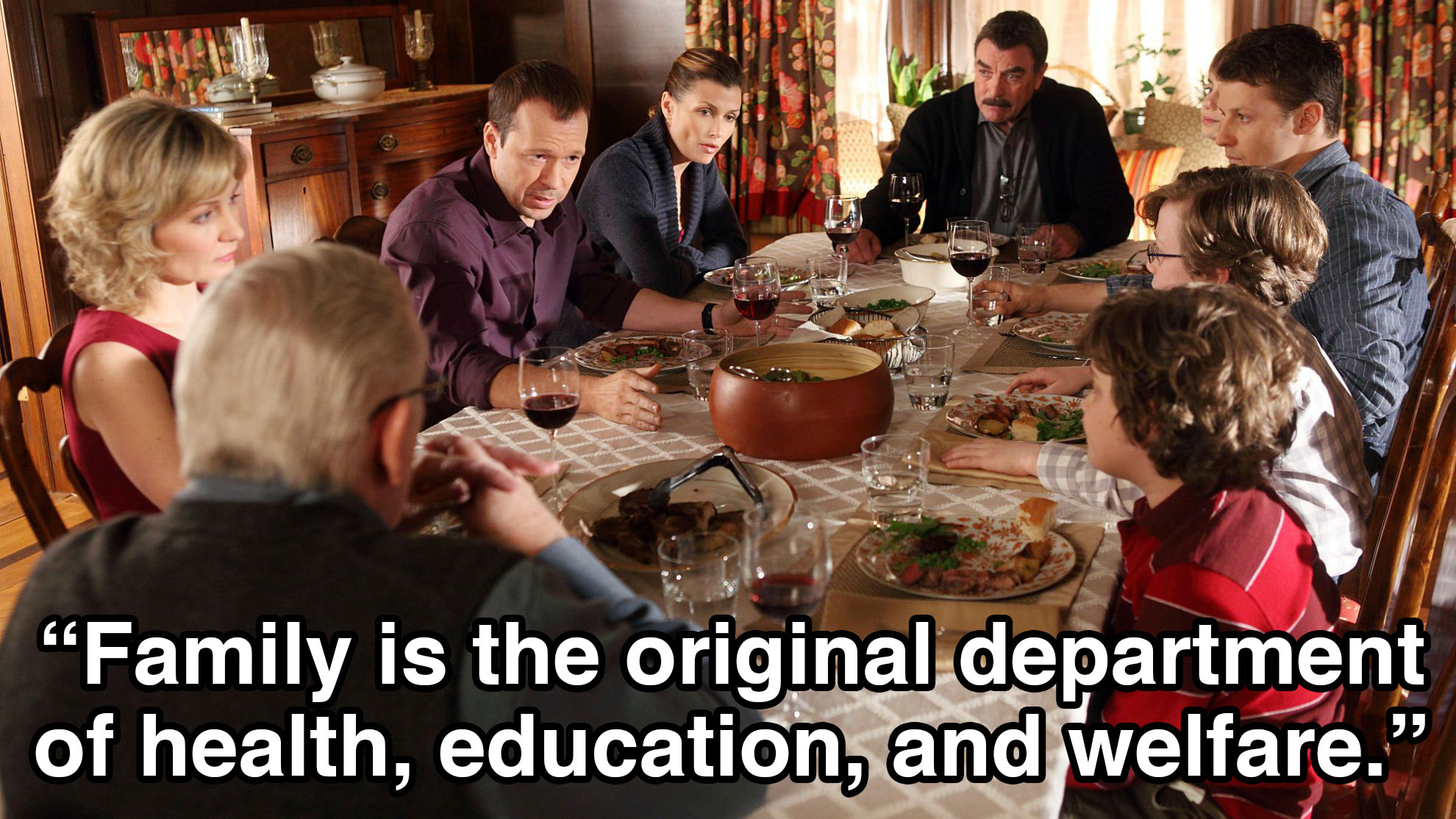 They make a big deal about how the whole family gets together for Sunday dinner every week. "Most families don't do that anymore," says Tom Selleck. "But I'm glad we do. Because family is what makes us strong."

So ever week, they gather around the table where Tom Selleck holds court dressed in, for some reason, a ridiculous looking cardigan. 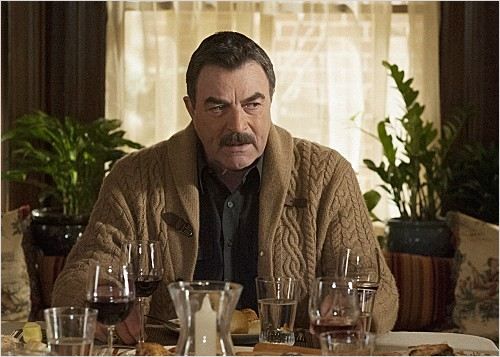 And they make a big production of saying grace before eating. 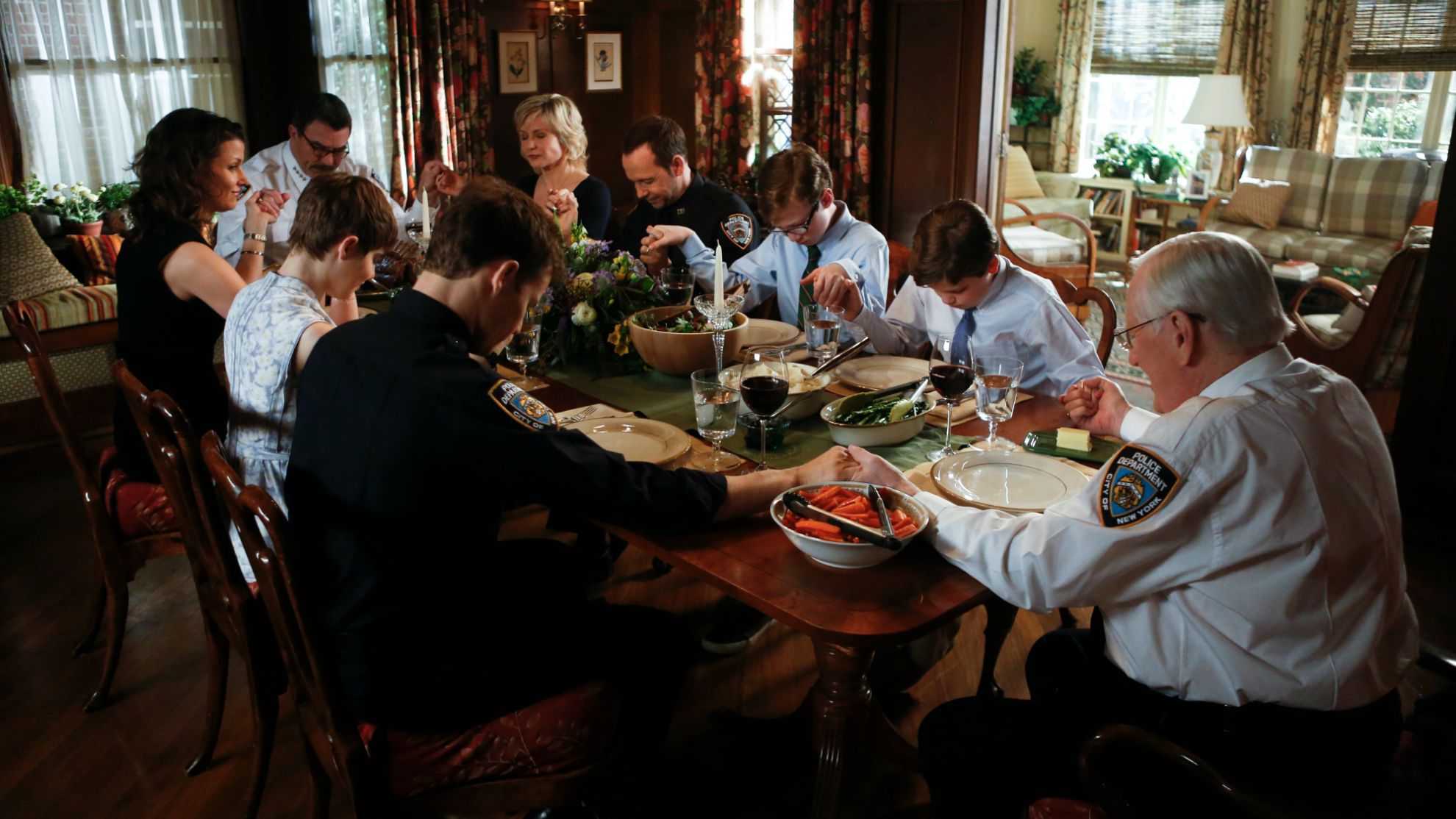 Why grandpa wears his uniform to dinner long after retirement is a mystery.


And they toss around some of the worst-written dialogue you're likely to hear on any show. It goes something like this.
Kid: "Hey, who made these rolls? They're great!"
Grandpa : 'I did."
Other kid: "So buying something at the bakery counts as 'making something' now?"

All the dialogue on this show is bad. It's just badly written. It's corny. It's cliche'. It's heavy-handed.

Like, how many times does Tom Selleck have to make a big point about how he can not abuse his position as police commissioner to give his sons any special treatment. When Donnie Wahlberg finds out he's being investigated by some agency, Tom Selleck refuses to tell him who is looking into him or what they're looking at. Inexplicably, Donnie Wahlberg assumes that Tom Selleck must be the one investigating him and storms out of Sunday dinner which, as you might expect, is the worst thing anyone in the family has ever had happen to them. At one point, Selleck worries aloud that his "no special treatment" is so well known in the department that it may be preventing anyone from poromoting his son, because they would be afraid that Selleck might think they were giving his son special treatment and then, boy, they'd be in trouble. Because, as we all know, nepotism is simply not allowed in big city police forces. Why, that would be unethical! And as we know, there are no unethical cops among New York's finest!

Okay, I know we're all sick of talking about Blue Bloods, but I just want to talk about one story line. In one episode, a white cop shoots a young black man. The cop swears he saw a gun in the man's hand, but no gun is found at the scene and the only eyewitness says the kid was unarmed. Naturally, here come the protesters who just can't forgive a cop for an honest mistake! Well, eventually, the eyewitness ends up recanting, said that the kid did have a gun, and that she had scooped up the gun off the sidewalk and hidden it because. . . reasons? Because this lady just wanted to hurt cops for some reason. Because of course the cop wasn't in the wrong. Of course not. How could he be? Cops never shoot unarmed black men, and people who claim that they do are obviously lying for some nefarious reason of their own. So the protesters are made to look like fools and the dead kid is revealed to have been a "thug" all along and no innocent person is ever harmed by a cop, case closed. 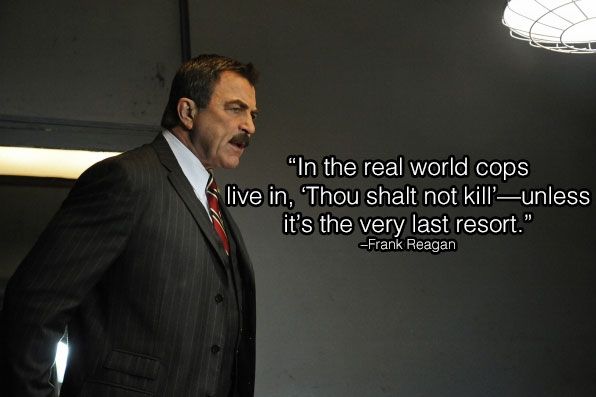