The Spin makes me Dizzy

Ever since Tuesday's special elections, representatives of all 3 involved parties- Republican, democrat, and whatever the fuck Doug Hoffman is, have been all over the TV pitching their version of what it all means. Mostly it boils down to "this is a big win for my side" and/or "what a crushing defeat for the other side."


So who can give us the stupidest spin?

I gotta think Erick Erickson has a pretty good shot at being stupidest.

Hold on, here we go! Keep your arms and legs inside the car until the spinning has come to stop.

The race has now been called for Democrat Bill Owens.

This is a huge win for conservatives.

Damn! that is what I say! How'd he know that?

There are two big victories at work in New York’s 23rd Congressional District.

Okay, obviously one big win was Democrat Bill Owens. what's the other one?

No, first was Bill Owens. But please do go on.

First, the GOP now must recognize it will either lose without conservatives or will win with conservatives. In 2008, many conservatives sat home instead of voting for John McCain. Now, in NY-23, conservatives rallied and destroyed the Republican candidate the establishment chose. 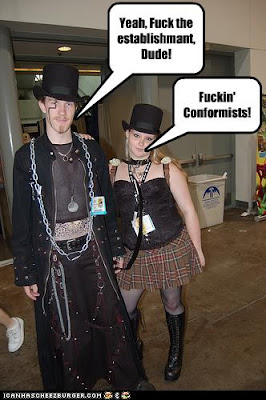 One might say that the folks you call "conservatives" might have learned that the can either lose on their own, or win with an "establishment" candidate, but that would presume that you have the ability to learn.

And whom do you consider "conservative" anyway? Dede Scozzafava was endorsed by John Boehner and Newt Gingrich! What is anyone to the left of Ron Paul a gay communist tree-hugger? Although, Ron Paul opposed the war, so I guess he wouldn't pass the test either. Hmm. . .who exactly is your constituency? Do you really think there are enough lunatic tea-baggers to win an election? Oh, shit! That is what you think, isn't it? Oh, um, you're totally right, Erick. Yeah, you should totally keep insisting that the republicans field Palin-approved tea party type candidates! Yeah, that's the winningest strategy ever!

I have said all along that the goal of activists must be to defeat Scozzafava. Doug Hoffman winning would just be gravy.

Really?!
The main goal is to defeat the candidate whose positions are pretty close to yours, and if you end up handing the race over to your political enemies, that's just fine with you? Really? Do you know how stupid that is?

A Hoffman win is not in the cards, but we did exactly what we set out to do — crush the establishment backed GOP candidate.

And make no mistake, despite the Beltway spin, we know for certain based on statements from the local Republican parties, that they chose Scozzafava based on advice from the Washington crowd.

Ok, first of all, crushing the Republican nominee, that's the job of the democratic candidate, why are you doing his job for him?

And i think the advice from "the Washington crowd" was probably to pick a candidate who could win, something your guy was seemingly incapable of.

Were we to combine Scozzafava and Hoffman’s votes, Hoffman would have won.

Yes, and if you were to combine all the runs the Phillies scored with all of the Eagles' touchdowns, Philadelphia would have won the World Series!

Secondly, and just as importantly, there has all of a sudden been a huge movement among some activists to go the third party route. We see in NY-23 that this is not possible as third parties are not viable.

That's your second "Big Victory"? finding out something which has been conventional wisdom for the last century or so? How is that a victory? You managed to lose one of the most conservative districts in New York State, and you learned something about why you lost. Wow! way to set that bar high! You forgot to count not falling down any open manholes as a victory! Oh, and Doug Hoffman didn't contract any deadly diseases during the campaign! Victory!!! And your guy lost, and your opponent won. Victory!!!! You know, there's no shame in admitting defeat. You say "we gave it our best shot, but we lost. We'll do better next time!" and you leave with your head held high. But no, you sound like Pee Wee Herman after he crashed his bike; "I meant to do that!"


For all intents and purposes, NY-23 is a trial run for Florida. And in Florida, the conservative candidate is operating inside the GOP. If John Cornyn and the NRSC do not want to see Florida go the way of NY-23, they better stand down.

John Cornyn (born 1952) is a Republican United States Senator who has represented Texas since 2002. In 2006, National Journal ranked Cornyn as the fourth most conservative Senator. [1] He also received a 100% rating from the Christian Coalition and from the National Right to Life Council. [2]

So, John Cornyn isn't ideologically pure enough for the Erick Erickson wing of the lunatic fringe? You guys are going to blow Florida too, aren't you? Yeah, keep it up Erick!

Posted by Professor Chaos at 4:45 PM No comments: