And by favorite, I mean most unintentionally entertaining. I've decide that since this country seems hell-bent on electing the most ridiculous  embarrassments we can find, I'm just going to go with it and enjoy the show.  Steve King is like a character created by Stephen King. If Stephen King decided to do comedy. He's a one-man circus side-show.

Check out his dumpster-baby argument. This is just a new level of bizarre reasoning. Some babies die right after birth and get tossed in garbage cans, therefore the interstate commerce clause does not apply. Game set and match!

And remember last year, his jaw-dropping defense of the man who crashed a plane into the IRS building which segues into a ludicrous fantasy about a national sales tax and the IRS with their thumb in his kitchen playing football or something, I get kinda lost halfway through, and the clip is only a minute and a half long.

And his opposition to food safety:

Oh, sure food will be safer, but on the other hand, who cares? I am totally opposed to government regulating food safety via the FDA, government must regulate food via the USDA. Also, there should be no regulation. We can solve the problem of unsafe foods without passing laws. Also there is no problem. I think I've made my point!


And die you know that one in five Britons and Canadians die from socialized medicine? 20% of the population dies each year, so both countries should be pretty much empty by now.

I know, that's Louie Gohmert saying that, but it's funny so I'm leaving it in.

Also, there's something weird going on with horses:

And maybe the most ridiculous claim ever made by anyone since Baron Munchhausen: "they'll be dancing in the streets because of his middle name"

Wow, I'm not sure I've ever seen a more ridiculous person than Steve King, my new favorite Congressman.
Posted by Professor Chaos at 4:34 PM 3 comments:

Least Relevant Headline of the Year

Ted Nugent isn’t on board with a Palin presidency yet

Yeah, that's a big deal, because I think people would really consider voting for that simpleton if only she had the endorsement of this guy: 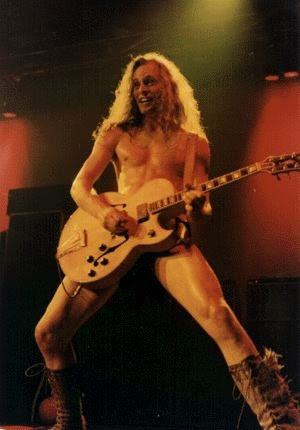 Posted by Professor Chaos at 3:34 PM No comments: