This picture of a billboard in Minnesota has been making the rounds lately: 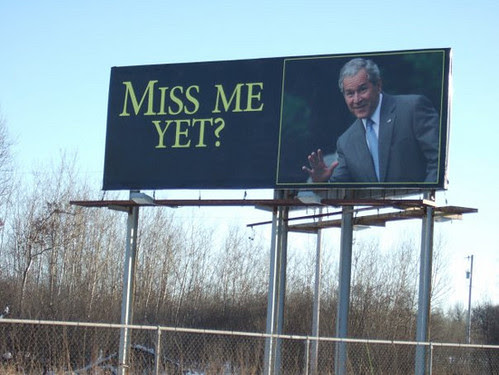 And I thought, yeah I sure do!
You know the new guy has been in office for over a year and has yet to invade a single country? He still hasn't declared any of our Constitutional rights optional. He hasn't, as far as I know, authorized any new forms of torture, or any warrantless wiretaps. He still hasn't claimed the ability to declare US citizens "enemy combatants," or any other made-up term and decide that habeus corpus will just not apply to them. I mean, what the hell? What has he been doing all this time? He certainly hasn't been clearing brush or reading My Pet Goat, the book so important that national crises will just have to wait until you're finished.

But anyway, I figured that this billboard just represented the viewpoint of one nutty Minnesotan, and no respectable person would share this opinion.
Apparently, the New York Times does not consider respectability to be a prerequisite for appearing on its op-ed pages, cuz look:

Do You Miss Him Yet?

I know you’re not supposed to, but I just love to say I told you so.

What I told you back on Sept. 28, 2008, was that within a year of the day he left office George W. Bush would come to be regarded with affection and a little nostalgia.

Yeah, if you had said that he would be regarded with affection and nostalgia by some nut in Minnesota, then you'd be within your rights to gloat, but most people have the same low opinion of Bushie as they did when he left office.


Well it’s a bit more than a year now and signs of Bush’s rehabilitation are beginning to pop up. One is literally a sign, a billboard that appeared recently on I-35 in Minnesota. Occupying the right side (from the viewer’s viewpoint) is a picture of Bush smiling genially and waving his hand in a friendly gesture. Occupying the left side is a simple and direct question: “Miss me yet?”

Like a said, some nut in Minnesota. Do you have any polling data that says that people in general are feeling more forgiving of Dubya?

The image is all over the Internet, hundreds of millions of hits, and unscientific Web-based polls indicate that more do miss him than don’t.

Oh, well if the polls are unscientific AND Internet-based, they're bound to be relevant!

Oh, and you know who else has millions of hits? Charlie.

I know you said"hundreds of millions" of hits, but I don't believe you.

A perhaps more substantial sign incorporates a sign famous (or infamous) in the Bush presidency. The March 8 cover of Newsweek reproduces the famous 2003 photograph of Bush on the flight deck of the U.S.S. Lincoln. The president is in the left of the picture, striding away from the famous banner proclaiming “Mission Accomplished.” 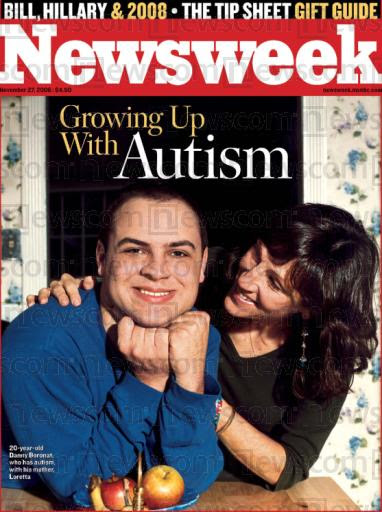 and a guy with autism.

It is a story that intersects with another, the story of the precipitous decline in Barack Obama’s support and of a growing suspicion, found on the left as well as on the right, where it is much more than a suspicion, that the politics of change may have been a slogan with less promise in its future than “Mission Accomplished.” (The imminent passage of a health care bill keeps being predicted, but so far no “victory at last.”)
Meanwhile, Bush’s policies came to seem less obviously reprehensible as the Obama administration drifted into embracing watered-down versions of many of them.

No, they still seem just as reprehensible, that's partly why Obama's approval ratings are down.
Are you really arguing that people are starting to miss Bush because Obama is doing a lot of the same things as Bush? And also, that people are disillusioned with Obama because he's too Bush-like?

How do you come up with this ridiculous argument? People are mad at Obama for being like Bush, whom they hate, and Obama's similarities to Bush make people miss Bush. If people miss Bush, wouldn't Obama's popularity increase in proportion to his similarity to Bush?

And now, right on schedule, Bush has resurfaced (just as I imagined him doing a year ago last September ) to join Bill Clinton in a humanitarian relief effort. He is officially a member in good standing of the ex-presidents club

and the longer he lives the more his reputation will be burnished. To be sure, his post-presidency resume is still thin, but we can expect it to be beefed up by good deeds, ceremonial appearances and the activities that will surround the building and opening of his library at Southern Methodist University.

Good deeds? Where the hell would you get that idea? When has Dubya ever done anything for anyone but Dubya or his cronies? What would you consider a "good deed?" Taking a few minutes between collecting 6-figure speaking fees from wingnut organizations to ask people to contribute to Haiti? You wanna see an ex-president doing good deeds? Watch Jimmy Carter build houses for Habitiat. Making nice for the TV cameras after a tragedy doesn't really compare. That's not a good deed, that's PR.

We’ll see Bush the tour guide and Bush the patron of historical scholarship and, perhaps, even Bush the seminar leader.

Tour guide? What the hell? Where would he be giving guided tours? You think if you go to his presidential library, he's gonna be showing folks around?
And patron of historical scholarship? That would be the death-knell of history in America. Seriously, no one, even the most ardent Bushie has ever used the words "Bush" and "scholarship" in the same sentence.

And the judgment of history? He will not go to the top of the list, but neither will he be the figure of fun and derision he seemed destined to be only a year ago.

Oh, hey, don't sell the man short! Let's start clearing some space on ount Fucking Rushmore! Squeeze over, Lincoln!
Of course he will still be the figure of derision he is now. What, is he going to get any less stupid or corrupt in the near future?

You heard it here.

Which is why I will never come here again.

At this point, I'd say I miss Corey Haim more than George W. Bush
Posted by Professor Chaos at 5:58 PM 2 comments: