Why is Hillary Clinton Disliked?

Why is HRC not more well-liked?
Well, the way I see it there are two types of Hillary-haters. those who hate her for the wrong reasons (see yesterday's post) and those who hate her for the right reasons.
Again, for the record, I do not hate HRC. I'm not a fan, but I don't hate her. I think she'll probably make a decent president along the lines of Barack Obama or Bill Clinton. No one's going to be clearing out any space on Mt. Rushmore for her, but she'll probably be fine.

But anyway. Why do so many people dislike Hillary?

Well, for one thing people quite rightly hate Wall Street and the big banks, the people who fucked the economy, gave themselves bonuses and demanded to be bailed out. Of course all decent people hate them. And HRC is reeeealy cozy with banksters and hedge funders. Hell, her son-in-law is one!
According to the BBC, "three of her top five individual donors have been Wall Street banks - Goldman Sachs, Citibank, and JP Morgan."  Everybody hates those guys and those guys are linked to HRC.


Hillary Clinton wore a $12,495 Armani jacket during a speech about inequality

"You have no reason to remember, but we came out of the White House not only dead broke, but in debt," Clinton said. "We had no money when we got there, and we struggled to piece together the resources for mortgages for houses


You know, there are some people who can pull off the "I feel your pain" routine without feeling anyone's pain. Her husband could. Although he had the advantage of having grown up poor. Hillary has never been poor. Which is perfectly fine, neither had FDR or Bobby Kennedy, but  neither of them ever complained about how hard it was to pay mortgages on multiple homes after just having left a $400,000 a year job with book deals in hand. You have to be able to say "I have been fortunate, I've never struggled financially, but I know that a lot of people are struggling and I want to help." And then maybe don't scoff at the idea of a $15/hr minimum wage.

There's also her reputation for war-mongering. A reputation that isn't helped by callously laughing about the "hard choices" of sending American troops off to fight and die.

According to TruthOut: "As secretary of state, Hillary Clinton was reportedly one of the most hawkish members of President Obama's cabinet, pushing for the 2009 troop surge in Afghanistan and US intervention in Libya. She has also been a vocal proponent of the same drone war that has led to the deaths of 2,400 civilians.. . . She also suggested that the United States should have done more to intervene in Syria, by, in her words, creating a "credible fighting force," while the lack of said force led to the rise of ISIS. In addition, she vociferously defended Israeli Prime Minister Benjamin Netanyahu's handling of the assault on Gaza. . . Senator Clinton's vote in favor of the Iraq war, a vote for which it took her more than a decade to express regret, was clearly not a temporary lapse in judgment.

Then there's her seeming inability to give a straight answer to simple questions. Questions like "do you support the TPP?" or "Are you in favor of the Keystone XL pipeline?" I don't remember which of these issues she was being asked about when she claimed she couldn't answer because the President was still negotiating or some such nonsense. Of course the reason she has so much trouble giving straight answers maybe in part that she doesn't really seem to believe in anything. Maybe she does, but it certainly doesn't seem that way.
Check out this chart: 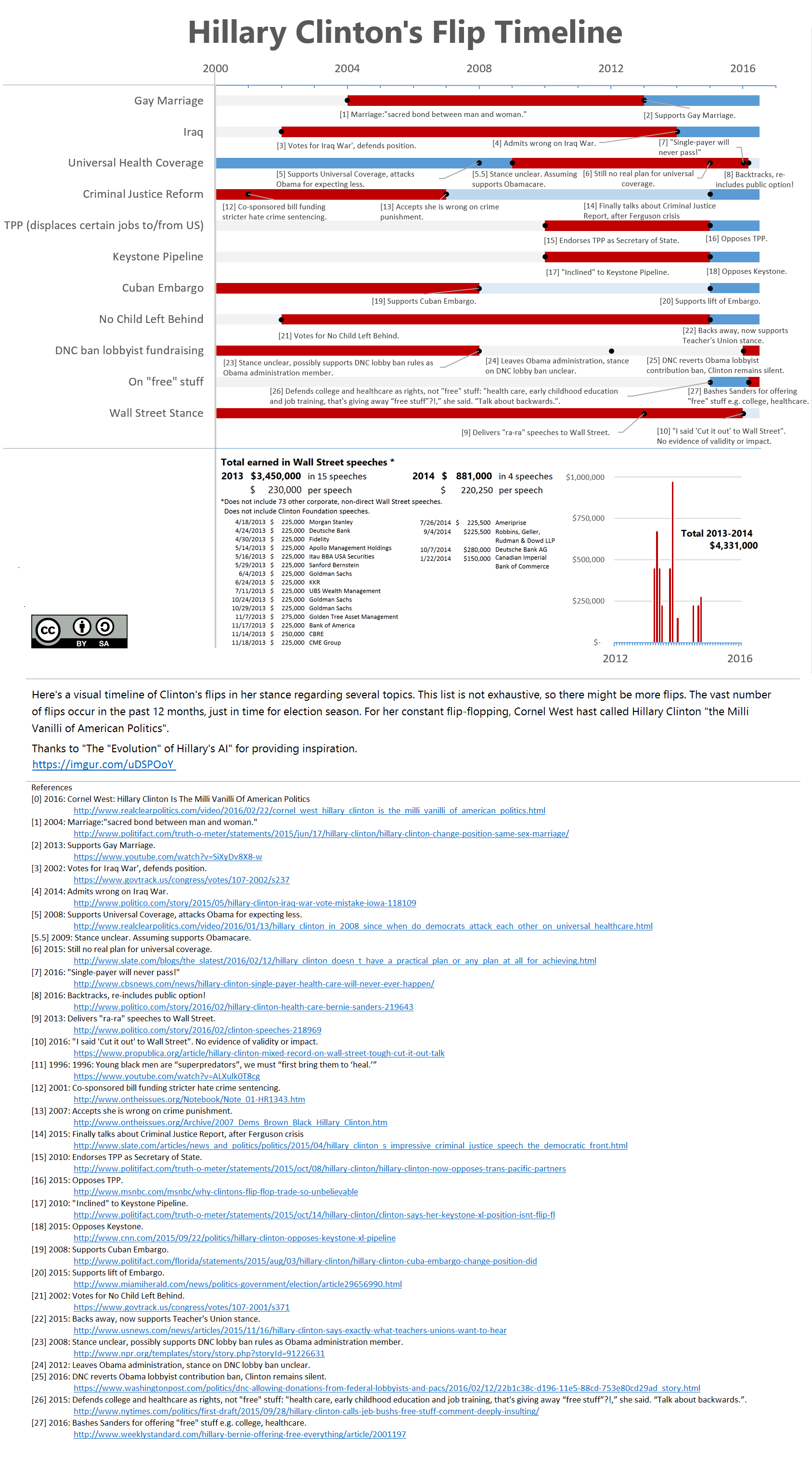 Okay, it's hard to read, but I think you can click to enlarge.
Anyway, for example, she was opposed to gay marriage until a tipping point was reached a couple years ago when marriage equality became a majority position then she was suddenly all for it.

She reluctantly supported raising the minimum wage to $12/hr, then when Bernie Sanders got popular enough to make her nervous, she suddenly embraced the #FightForFifteen, claiming to have been in favor of $15/hr all along.

There are a lot more examples, but just ask yourself this: What is Hillary Clinton's message? Why does she want to be President? Sanders' message is Democratic Socialism. Trump's message is "I am great. Vote for me and America will be great." Ted Cruz's raison d'etre was turning the United States into a theocracy. What is Hillary's platform? What reason has she given to choose her as our next president, other than her impressive resume'? How would one complete the sentence "If Hillary is elected President, she will. . .?"
She offers competence. That's great. That alone puts her head and shoulders above Trump or any of the other GOP candidates. But it's not exactly inspiring. There's no "vote for me and I will. . . " in her campaign rhetoric.


Then there's the perception that her good friend Debbie Wasserman Schultz has rigged the election in her favor. Whether that perception is accurate or not (and it sure seems like it is) we've been seeing debates scheduled at the worst possible times. We've seen caucus results worthy of banana republics.

Now, are all these incidents really what the Missus calls "shenanigans?" Maybe not. Maybe some of them are just screwups. Maybe some are just due to incompetence. But they all seem to break in Hillary Clinton's favor, and, as they say in DC, the optics are bad.


So why do so many people dislike Hillary Clinton?
Yeah, David Brooks is probably right. It's because of her lack of leisure activities!
Posted by Professor Chaos at 9:32 PM 2 comments: