People who scare the Hell out of Me

The next generation of the Religious Right.

If you think this generation is nuts, wait until you see the kids they've been homeschooling.

She doesn't even know why she's crying!
It's not just that they are being brought up in a bubble, I was brought up in that bubble. I went to Church-run schools from 1st through 12th grade. We were taught that "the world" was not to be trusted, that the Devil was lurking everywhere, looking to tempt us into damnation. We were taught to expect persecution when we "went out into the world." But at least we had tv. No one was putting out straight-to-video veggie Tales and Kirk Cameron movies to further insulate us. And there weren't 20 different cable channels featuring nothing but conservative preachers. (There was Billy Graham, but he was considered a sort of heretic in our church.) (Seriously.)  And we could get books from a public library. I don't think a lot of these kids get any exposure to real life. Hell, they even have their own haunted houses at Halloween time, lest their fantasy life get polluted by witchcraft and the occult!

Besides, nothing could be scarier than an abortion doctor!
But it's not just that the bubble has become even more all-enveloping. It's the increased use of military imagery that really makes these kids scary. 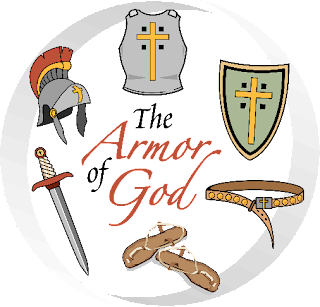 I don't understand the "prayer warrior" thing, either. To me, a warrior is one who fights battles, not one who gets on his knees and asks someone else to fight them for him. But anyway. . .
Remember "Jesus Camp?" There's a couple of scenes in there that are disturbing. One is a skit the kids do dressed in camo fatigues and talking about "defeating the enemy."

Correction: Only the BOYS wear camo fatigues. Girls wear, what, Danskins?
The other is when the lady who runs the camp bemoans the fact that little Christian children aren't being raised with the same fervor that leads Palestinian children to grow up and become suicide bombers.
Here's an example of the sort of creepy, militaristic stuff coming from the Dominionist right these days. From wacky self-proclaimed prophet Cindy Jacobs:

Lay Siege to a City

By Cindy Jacobs
The earth is the Lord’s, and everything in it, the world, and all who live in it.
(Psalm 24:1)

. . . Frankly, as we examine the cities in which we live, many would have to say, “Truthfully, there is a lot about my city that is not godly.” . . . What has happened to God’s world? The Bible also states that Satan has declared himself the “god of this world.” Satan has effectively built strongholds around our cities and the people groups of the world. He is holding captive billions of souls who will spend an eternity in hell if we do not learn how to storm the gates of hell on their behalf

Okay, it's one thing to lay siege to a city, but if you're planning on invading Hell, you're on your own! Atlanta is hot enough, thank you very much!

The army of God is on the move and ready for battle strategy. A new breed of watchman is emerging across the nations. This breed is ready to lay siege to their cities.

See, this is exactly the kind of talk that usually ends with someone denying that she ever meant for anyone to kill that doctor, not that he didn't have it coming.

Jacobs, by the way, has a 4-step foolproof plan for laying siege to your hometown!

1. Make a map.
God desires to reveal strongholds to His intercessors concerning their area. Ezekiel was told to make a map (4:1). This concept, called “spiritual mapping,” has been largely uncovered by recent pioneers in spiritual warfare such as George Otis, Jr.

Yes, "Spiritual mapping." Also known as cartography. Also known as wasting a lot of time since you can buy a fucking map at any gas station or bring one up on your phone in like 2 seconds, but sure, of course God prefers your crude, hand-drawn "map" of your city. Also, the passage she references, God tells Ezekiel to literally draw a map. Not a "spiritual map," an actual, physical map, drawn on a tile. And this is an actual siege that Ezekiel is prepping for, not some stupid "spiritual siege."

Battering rams. Building forts. This sounds like real warfare, this has nothing to do with whatever Cindy Jacobs is talking about.
And reading further, what result does God predict will follow Ezekiel's siege?

Ezekiel Chapter 5:
10Therefore, fathers will eat their sons among you, and sons will eat their fathers; for I will execute judgments on you and scatter all your remnant to every wind. . .
12'One third of you will die by plague or be consumed by famine among you, one third will fall by the sword around you, and one third I will scatter to every wind, and I will unsheathe a sword behind them. 13'Thus My anger will be spent and I will satisfy My wrath on them, and I will be appeased;

And this is what she wants us to emulate? Holy fuck!

What's step 2?
2. Set an intercessory strategy.
The spiritual mapping of a city can be used to develop a strategic plan to tear down the strongholds of the enemy. Ezekiel was instructed in verse 2 to “lay siege walls” against the city. These were movable watchtowers which were placed near the walls or strongholds of the enemy to spy out, research, and weaken the besieged stronghold. “Watchmen” were placed in these towers to give information for strategy. These watchmen harassed the enemy from a high place that was purposely built for war. The Lord has placed his watchmen throughout the world whom He has anointed to spy out, research, and harass the enemy through intercession.

Whatever that means. Nothing good, I'm sure. Harassing people from a watchtower, isn't that what the Jehovah's witnesses do?

3. Implement the strategy.
God told Ezekiel to build a ramp or earthen mound against the walls. He was also told to build camps and lay battering rams against it (4:2). Today this is accomplished through unity in prayer with pastors and leaders, prayer in local churches and the formation of “camps” of prayer groups for the city. These groups pray the prayers that are the “battering rams” against the gates of hell in the city.

Wait. The gates of Hell are here in the city? Couldn't we just padlock them? Problem solved!

Found One! Hand me a padlock!

4. Build a wall of protection.
Ezekiel was instructed to take an iron pan and place it as a wall (4:3). This wall offered protection against the fiery darts of the enemy from the besieged stronghold. We can build a wall by claiming the protection of God in our lives (Psalm 91). To withstand Satan’s counterattack, we need to keep these walls in a state of repair through personal holiness and right relationships to God and man.

A pan. I'm to hide behind a pan. Really? A pan? That's going to protect me from Satan himself? A pan?

Anyway, I seem to have digressed a bit. Point is, the next generation of the Religious Right is going to be Hell!
﻿
Posted by Professor Chaos at 5:57 PM 1 comment: