The Most Amazing Thing I've Ever Seen

I think this Ukranian girl has invented an entirely new artistic genre.

Thomas Sowell Continues to Have So Much Credibility!

This was in today's paper. For some reason I read it. Now I can't un-read it. You'd think I would learn.

Before I even start, you want to know something weird? I could not find this column on the Atlanta Journal-Constitution's website. I found it on Jewish World Review.com
I don't know why Thomas Sowell would be one of the regular contributors to http://www.jewishworldreview.com/
but he is.

Random thoughts on the passing scene:
Sometimes we seem like people on a pleasure boat drifting down the Niagara river, unaware that there are waterfalls up ahead. I don't know what people think is going to happen when a nation that already sponsors international terrorism has nuclear bombs to give to terrorists around the world.

You aren't scared enough, people! I want to see some pants-wetting, hair-standing-on-end fucking cowering! Be Afraid!
At least he isn't using the old "mushroom cloud over an American city" scenario.

No one likes to admit having been played for a fool. So it will probably take a mushroom cloud over some American city before some Obama supporters wake up.

Oh come on! I was trying to give you a little credit!

So it will probably take a mushroom cloud over some American city before some Obama supporters wake up. Even so, the true believers among the survivors will probably say that this was all George Bush's fault.

They will probably say that Iran developed its nuclear program during the Bush administration which is so unfair because it's true. They might even point out that out of the three "Axis of Evil" nations, Bush invaded the only one that didn't have an active nuke program. Some total true-believers might even stoop to claiming that this sent a clear signal to the world that the best way to avoid being invaded by the US is to get some fucking nukes. I'll bet they will even toss in the fact that North Korea also went nuclear during the Bush years, which is totally not even fair!

Here is a math problem for you: Assume that the legislation establishing government control of medical care is passed and that it "brings down the cost of medical care." You pay $500 a year less for your medical care, but the new costs put on employers is passed on to consumers, so that you pay $300 a year more for groceries and $200 a year more for gasoline, while the new mandates put on insurance companies raise your premiums by $300 a year, how much money have you saved?

OOh, Ooh, I got one. If a newspaper saves $1,000 by cancelling its contract with Thomas Sowell, but then readership increases lead to an additional $1000 in revenue, and the paper saves another $100 by leaving the space previously occupied by Sowell blank, because a blank space has more credibility, then how much have you saved?

What? Oh, I thought we were making up hypothetical scenarios with random dollar amounts. Isn't that what we were doing? 'Cuz I think that's what you were doing.

There has probably never before been as drastic a decline in the quality of vice presidents as there has been when Dick Cheney was replaced by Joe Biden.

You don't know what the word "decline" means, do you?

There has probably never before been as drastic a decline in the quality of vice presidents as there has been when Dick Cheney was replaced by Joe Biden. Yet the New York Times is lionizing Biden as a wise counselor to President Obama. When you support the liberal agenda, that makes you brilliant ex-officio in the media, whether or not you are vice president— and whether or not you have even common sense.

Yeah, can you believe this clown Biden? He hasn't even advised Obama to invade any countries yet, and it's been almost a year! He hasn't come up with any new ways to skirt the Bill of Rights, he probably hasn't even tortured anyone.If he doesn't expose an undercover CIA agent soon, Obama should fire him!


People who are urging us to do things to win the approval of other countries seem to put an excessive value on other country's approval, as distinguished from their respect that we can lose by such bowing to "world opinion." Do the world champion New York Yankees try to curry favor with teams that are also-rans?

That's why you have to invade smaller, weaker countries with no connection to 9/11! Everyone repects a bully!

. . . Do the world champion New York Yankees try to curry favor with teams that are also-rans?

Hell, no they don't! Although if they were going into the 425th inning with no real plan for getting out of Fenway Stadium, they might. But then they'd be pussies! 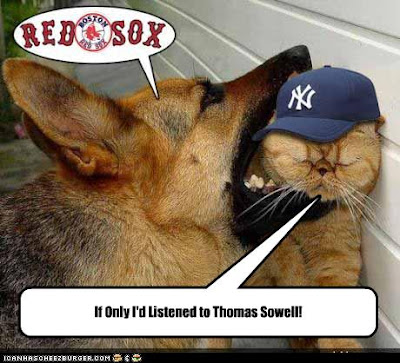 (for the record, I hate the Yankees and Red Sox equally)

Fox "News" Continues to be a joke.