It can't be easy working for Newsbusters. Every day, you have to get up, go through the newspapers, watch the TV news, and try to find something that you can twist to fit into your "they're all against us" worldview.

Sometimes, if you can't find any evil enough news, you are reduced to reporting on another website's news listings. And those listings, boy are they ever out to get you!

And by you, I mean Mark Finklestein.

In deciding which Sunday talk shows to focus on, I typically tap into Politico's Sunday talk show tip sheet, which provides a helpful round-up of the Sunday line-up.
Just minding my own business, not going out looking for something which I can use to paint myself as the victim of the horrible, awful, Mark-Finkelstein-hating media. I just happened to stumble on to this: 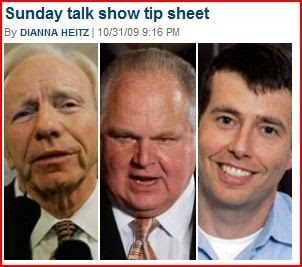 Scrolling there today, I came upon the photo you see here. Of all the innumerable images of the three men, these are the pictures Politico chose to announce the appearance of Joe Lieberman, Rush Limbaugh and David Plouffe on Face the Nation, Fox News Sunday and Meet the Press, respectively. You don't suppose Politico's pic picks might reflect its biases, do you?

Let's first rank the three men from most conservative to most liberal. Easy: Rush, Lieberman, Plouffe. Now let's rank the three photos from least flattering to most flattering. Does anyone doubt that the order would again be Rush, Lieberman, Plouffe?
Yes, clearly the fact that Lieberman is old and creepy and Rush is bloated, puffy, and, well, fat shows the bias of Politico.com. 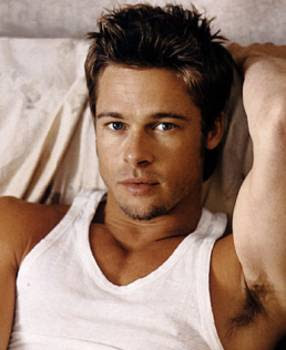 Why didn't they use this picture of Rush? 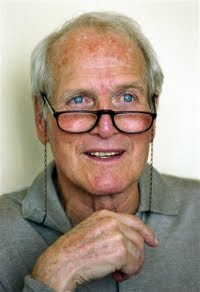 Or this more flattering shot of Joe Lieberman?

Clearly it's all part of Politico's evil plot to make David Plouffe look good. that's why they used a picture of Plouffe in which he looks like an elf. Like the kind of elf who probably got bullied a lot by the tougher elves in elf high school.


The most pathetic thing about this little mini-diatribe against politco.com is that Finklestein doesn't even seem to know what Politico is. He just sees the picture and assumes that this is some left-wing site which has an obvious bias against conservatives.

It took me about 30 seconds to find this at Wikipedia: Frederick J. Ryan Jr., former Assistant to President Ronald Reagan[3], and currently chairman of the Board of Trustees of the Ronald Reagan Presidential Library Foundation, is president and CEO of Politico.[4]

Politico is really just a GOP bulletin board

It's a place where any spin the RNC burps up is immediately seized upon as news by Politico . (link)

But if you work for Newsbusters, it doesn't matter if Reagan himself is writing copy for Politico, if it's a media outlet, you are required to assume that it is out to get conservatives and you must find somethin, anything on the site to bolster that theory.

It can't be easy working for Newsbusters.

Posted by Professor Chaos at 6:14 PM No comments: