Second Best Surprise of the Year:

I was vaguely aware that there was a show called "Scream Queens," but I didn't really know anything about it until someone whose opinion I respect recommended it. So we started watching it On Demand. And loved it!
Scream Queens is a very funny show. I guess you'd call it a "dark comedy" seeing as it's centered on a series of murders, but the writing is very clever, and the cast is fantastic. Emmys all around, especially for Jamie Lee Curtis who is a revelation. I hadn't seen her in a comedy since Trading Places and I had no idea that the poop yogurt lady had these kinds of comedic chops. Of course it helsp that she gets to say lines like "I'm going to barf on your face if you don't get out of here!"

Dean Cathy Munsch: You are awful in bed! Are you aware? I mean, just the worst.
Chad Radwell: What-what? Did I not take you there?
Dean Cathy Munsch: Look what I've stooped to. Getting sex by blackmailing students on academic probation.


Also, Glen Powell, whom I'd never seen in anything, as the unbelievably conceited, self-absobed, but kinda nice in his own way Chad Radwell.

He's brilliant. Niecy Nash is hilarious, but we expected that from the Reno 911 alum. Oh, I almost forgot former SNLer Nasim Pedrad. She's hilarious too. Oh, and the unbelievably deadpam Billie Lourd who plays Chanel # 3. Seriously, if you haven't seen this show, you're missing out. 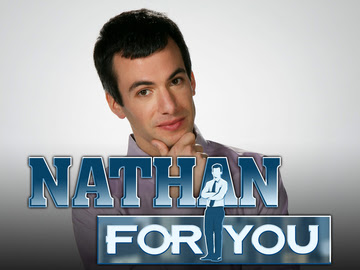 I didn't watch this show when it first came out, because the trailers didn't look too good. Turns out, it's not the kind of show that really lends itself to promos, there aren't any quick, sound-bite-ready jokes, s lot of the humor comes from the slow-building tension as the participants in the show get more and more uncomfortable.

Nathan Fielder is a comedian from Canada who poses as a free-lance consultant for small businesses. Everyone else in the show is a non-actor. They are actual business owners, employees and customers. Nathan somehow manages to keep a straight face while suggesting absurd schemes to the business owners which they invariably end up trying to sometimes surprisingly successful results.

Whether it's planting a large number of birds on an overhanging branch to drum up business for a car wash, hiring a stunt driver to work as a valet, or turning a local coffee shop into "Dumb Starbucks," Nathan plays it dead serious throughout and the schemes are actually put into practice. And if you enjoy Larry David / Ricky Gervais levels of uncomfortable humor, just watch Nathan audition an actress, having her say "I love you" to him over and over and over. . . I know I was squirming.

Worst development of the year:

The cancellation of The Soup.

How much can this show possibly cost to produce? It's basically just Joel McHale standing in front of a green screen for 22 minutes while they show clips of garbage reality shows for him to mock. And what else does E! have that's so important they had to cut The Soup to make room for it? Another show about idiotic young people who get drunk a lot and try to sex each other? Because, yeah, there sure aren't enough of those on E!