Saw a link to this article come across my Twitter:

What Does Tucker Carlson Believe?


Why?
Why the hell would a respectable publication like the Atlantic feel the need to fluff a scumbag like Tucker Carlson? What does he believe? Who Cares? Let's say he really secretly believes good things and he's just putting on a show of being a racist asshole. Who cares? The damage he's doing is real either way.


Tucker Carlson does not think he is an “especially” good person. He knows he can “get mad” and “make a mistake,” that he can “overstate” things as a result of getting “caught up” in his own rhetoric.

He also knows he can sometimes get “self-righteous,” and this, as we speak on the set of his Fox News show on a recent Friday, seems to bother him the most.

Of course.
God forbid you write an article about how Tucker Carlson is a white supremacist scumbag who should be tarred and feathered and ridden out of town on a rail and that rail would actually be Laura Ingraham.


“Our leadership class is narcissistic,” Carlson tells me. “And like all narcissists, they’re incredibly shortsighted. The moral preening is a symptom of something deeper, which is narcissism.”

Narcissistic.
The man who goes on television every night to tell people what he thinks about things finds the leadership class narcissistic.

On that recent Friday night, I watch from behind the cameras as Carlson, toggling between his signature expressions of deep concern and manic delight, berates the conservative establishment. . .

. . . Such segments seem to fulfill the initial promise of Tucker Carlson Tonight, a show that once looked primed to thoughtfully channel the anti-elite sentiment sweeping the right, and perhaps disentangle it from the racial appeals long used to buoy it.

WHAT?
Seriously?
Tucker Carlson was going to disentangle right-wing populism from the racial. . .you mean this Tucker Carlson? 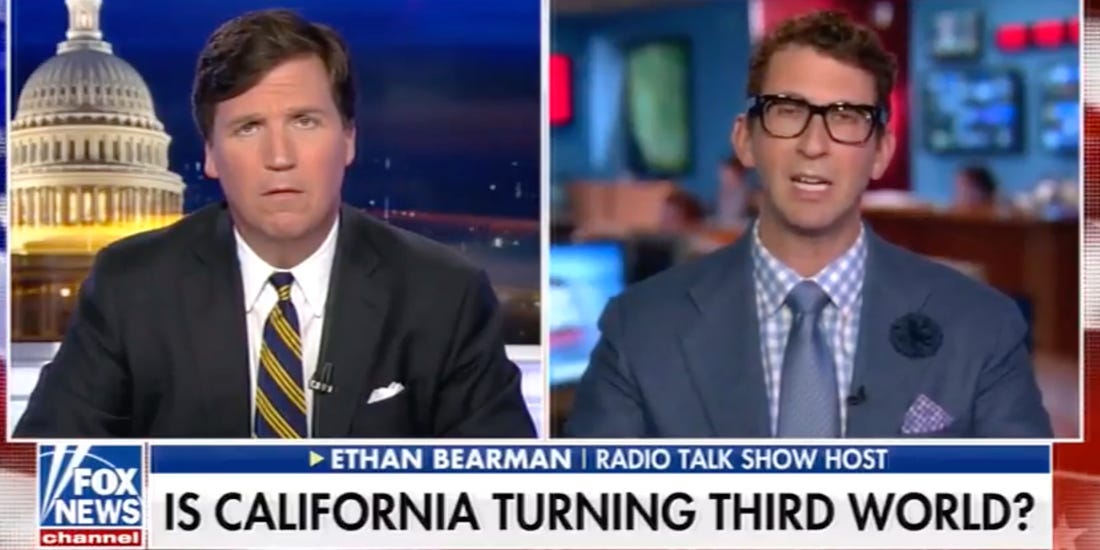 That's the Tucker Carlson for whom you had high hopes of seperating conservative populism from "racial appeals?"

At the time of the show’s launch, six days after Trump’s election, it didn’t seem insane to think that Carlson might fashion himself as the voice of a new right-wing populism: Here was someone who even pre-Trump had spoken out against the corporatist, globalist tropes captivating the leadership of both parties,


who before focusing on TV was a widely respected writer for the likes of Weekly Standard,

For the Weekly Standard!


Oh my God. There has never been a respected writer for the Weekly Standard. That's an oxymoron. It's like saying "the respected fashion designer for Sears Roebuck" or "the respected biology lecturer at Liberty University."

If there was anyone who could articulate a meaningful iteration of Trumpism, one with the intellectual heft to persist beyond the Trump era, maybe it was Carlson.

Intellectual heft? Where in the hell are you seeing "Intellectual heft" in Tucker Carlson?
Also, there is no such thing as "Trumpism."  This is just what the Republican Party is now. Blithely nihilistic, gleefully sadistic wantonly destructive, driven by hate fear and greed. There would be virtually no difference in policy had it been President Cruz or President Santorum or President Walker except that any other Republican administration would probably be less buffoonishly incompetent.


Ask someone who knows Carlson about the past three years, and you’ll likely hear a lamentation. It’s one of the trendier virtue signals among political and media types: saying you believe that Tucker Carlson is so smart, that it really is such a shame, because he of all people should know better, and what, pray tell, happened to him?

So the people that know him are either disingenuous hypocrites or have such little intuitive ability that they never realized that the man they thought they knew was really just a stupid racist asshole who wore a bow tie to appear erudite and urbane.These are the kind of people that wouldn't recognize that Clark Kent is really Superman because Superman doesn't wear glasses

Also, if that's true, you should really be able to quote at least one of Carlson's acquaintances voicing that lament.  Otherwise, I'm just going to assume you made that part up.


The subtext of these conversations is the question of whether Carlson is, as Democratic Representative Alexandria Ocasio-Cortez recently claimed, a “white supremacist sympathizer.” For a time, the question could be written off as unserious,

NO!
No, it could not be. Not by anyone paying attention.
Only in the pressrooms of august publications where it is considered beyond the pale to point out that a racist is a racist (or that a liar is a liar) could the question of whether Tucker Carlson is a white supremacist be written off as unserious.

But in recent years, Carlson and some of his guests have lent more and more plausibility to the label. On August 6, for example, days after a white gunman killed 22 people in El Paso, Texas, motivated by a fear of a “Hispanic invasion of Texas,” Carlson took to his program to argue that white supremacy was “not a real problem in America,” but rather a “hoax” drummed up by Democrats.


Oh, well good thing you're giving him a friendly profile in a major magazine then!

The question, then, is whether this larger worldview Carlson is espousing each night, encompassing restrictionism, protectionism, and anti-interventionism, has currency with GOP voters absent a race-based appeal—in other words, whether an economics of meaning alone can sustain a populist revolution on the right. Carlson says it does, and it can.

Oh does he? Does he say that? Does the white nationalist teevee guy say that his populism is purely economic and not racially-based at all? Is that what he says? Oh, well I guess I had him all wrong then! Oh, and hey, Ted Bundy said that he didn't murder all those women. Guess we owe him an apology!

Look, there is no way for an "economics of meaning" can resonate with any significant portion of the right without at least implied racism. Pretty much everything on the right is based on the fear and loathing of some "other," whether it be people of different races, or LGBT people or people with uteruses or whoever they can find to be afraid of. You know, rural white foilks used to love New Deal programs. LOVED them. So-called "welfare" problems were very popular with rural white folks until black people became eligible for them. Then, suddenly these programs became "handouts" for lazy people who don't want to work and won't pull themselves up by their bootstraps and they just take money from decent hard-working people and give it to these moochers. Oddly, this attitude does not apply to, say, farm subsidies or ethanol subsidies, or the nutrition assistance that my family gets, not like those lazy leeches on food stamps!

His programming tells another story. On his December 6 broadcast, one day after our interview, Carlson featured Pete D’Abrosca, a North Carolina congressional candidate campaigning on an end to immigration. D’Abrosca’s plan appears rooted in his belief that white Americans are “being replaced by third world peasants who share neither their ethnicity nor their culture.” He’s been lauded by the white-nationalist website VDare and is strongly supported by the so-called Groyper movement, an offshoot of the alt-right led by Nick Fuentes, a 21-year-old who has, among other things, denied the extent of the Holocaust and argued that the First Amendment was “not written for Muslims.” D’Abrosca went on Carlson’s show to advertise his proposed 10-year moratorium on immigration. “I think that there’s a new Republican Party in town,” D’Abrosca said.


You know, does it not occur to you at all that you could have led with this? That the question of "What does Tucker Carlson believe" could have been answered with this one short paragraph? And then you could have clicked "publish" and saved you and me both a lot of fucking time.