I Save You Ten Bucks

On Thanksgiving day, Mrs. Chaos, myself, and a friend saw
"The Road." I don't want to spoil the plot, such as it is, for anyone who is going to insist on subjecting themselves to this movie, but I will just say thay, after the first 20 minutes or so, I spent the next Two Hours rooting for the main characters to commit suicide.

I know that this movie is getting good reviews, and yes the cast is terrific. And the movie is visually impressive. But it's all in the service of a go-nowhere plot that just drags on monotonously and repetitively. And the voice-over contains lines like this:
"When I have nothing else, I try to dream the dreams of a child's imaginings." (probably not an exact quote, but as close as I can remember)

The basic story is that some un-named catastrophe has killed all the plant and animal life on earth (except for a bunch of humans, for some reason)
The entire earth has gotten extremely cold, damp and cloudy. Cannibalism has become common. And this man and his young son are determined to stave off their inevitable doom long enough to get to the coast. They never explain why they are so hell-bent on getting to the coast, and when they do finally get there, and it's just as desolate and hopeless as everywhere else, they don't seem at all surprised or disappointed. And their pontless journey just goes on pointlessly until the father dies. 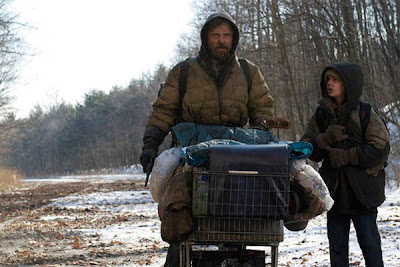 And I get that it's supposed to be about people trying to hold on to their last bit of humanity under completely inhuman conditions, or the power of mankind's survival instinct, or the strength of the father-son bond or what-the-fuck-ever, but honst-to-God, when you're trying to keep yourself from shouting at the screen "Just do it! Just shoot the kid then shoot yourself!" it's hard to really care about these sort of themes.

And early on in the movie, the father shows the son how to put the barrel of the gun into his mouth and pull the trigger "when the time comes," but somehow the time never ever comes. Even when the father is dying and leaving his Maybe-10-year-old son to fend for himself, he still doesn't put the poor kid out of his misery. 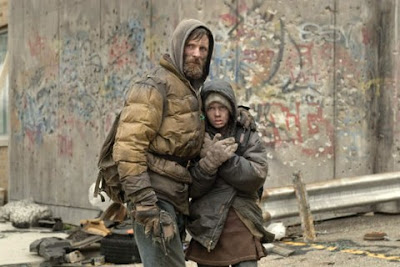 And this isn't even the most preposterous plot point. Earlier in the movie, the kid and his father find a waterfall cascading into a river. Even thought they are bundled up in parkas and wool hats and gloves, they decide to just strip off and go skinny-dipping, as if they were vacationing in the tropics.

Later, after finding an abandoned bomb shelter full of food, blankets, etc. the father decides that they have to leave because it isn't safe. Which wouldn't be strange except that we've already been shown that there is nowhere safe anywhere in the entire fucking world! So the choice is being in danger, but hidden away with food and shelter, or being in danger out in the open without food. And this goddamned genius picks the no food and shelter option?

And when they get to the coast, the father, who has been pretty understandably paranoid about letting the boy out of his sight, decides to leave the boy in a tent on the beach while he tries to swim out to an abandoned boat offshore to see if there is anything onboard that they can use. Oh, but he does give the kid the gun which at this point has exactly ONE BULLET left. So, yeah, he's probably pretty safe.

Anyway, I guess the short version of my first attempt at writing a movie review is this:
"The Road." Save your money.
Posted by Professor Chaos at 4:14 PM No comments: