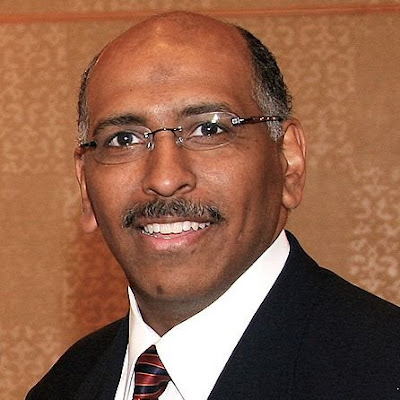 As if he hasn't embarrassed himself enough lately, Mr Steele had this to say on the subject of global climate change:

“We are cooling. We are not warming. The warming you see out there, the supposed warming, and I am using my finger quotation marks here, is part of the cooling process. Greenland, which is now covered in ice, it was once called Greenland for a reason, right? Iceland, which is now green. Oh I love this. Like we know what this planet is all about. How long have we been here? How long? No very long.”

The warming is part of the cooling process? I'm sorry, did you bring enough stupid for the rest of the class?
Oh, and yes, there is a reason why Greenland is called Greenland.

Norse legends written in the 12th century and later, it is told that Eric the Red explored the southeast and southwest coasts of Greenland in A.D. 983-986 and gave the country its name because people would be more likely to go there if it had an attractive name.
(from Answers.com)

Might want to do a quick Googling before making public statements.

But really, it's not just Mr Steele that's the problem here. For one thing, there's a pretty slim chance that he's actually this big a dullard. The thing is, he's so emblematic of the pernicious strain of anti-intellectualism that has infected our political process. It's this anti- knowledge, anti-science, anti-reason attitude that allows people to consider their "gut feeling" to be superior to actual expertise, that allows people to dismiss educated people as "elitist" or "out of touch." This pro-ignorance stance makes it easy for people to say things like "the jury's still out on global warming," assuming that the considered opinion of every legitimate climatologist in the world is no more authoritative than one's own observation that the last few days have been pretty cold.

That's how we end up with a fiasco like this:

Everyone knew that Al Gore was vastly more intelligent than George W. Bush, so why did so many people vote for W? For precisely that reason. Too many voters disliked Gore because he was smart. They liked Bush because he seemed like an ordinary, regular guy. Problem is, Bush actually is a regular guy. And a regular guy is not qualified to be the leader of the free world. An electorate with any sense would want to vote for an extraordinary person to be president. The previous 8 disastrous years should have served as an object lesson in "why being an amiable, slow-witted dunce is not sufficient qualification to be president," but no. Way too many of the same people have steadfastly refused to learn any lesson from the recent past, which is why we may end up, (God Forbid) with this:

The Upper Crust--the greatest Aristocratic Rock band in the world--present: