A Special Thank You to Dr. Monkey Von Monkerstein

Today, I received my first link. (that I know of)
The Daily Irritant can now be accessed by readers of the far superior Monkey Muck. 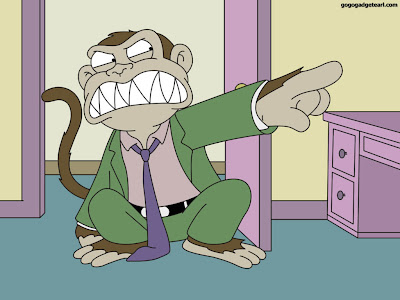 Thank you, Dr. Monkey for making me legit!
Posted by Professor Chaos at 7:29 PM 1 comment:

A Religious Fanatic in the White House

"religion is a good thing for good people and a bad thing for bad people."


I can think of no greater illustration of the second half of that adage than George W. Bush

(seen here dreaming of the rapture)

Then we heard about the memos from Rumsfeld which were festooned with Biblical passages such as: “Therefore put on the full armor of God, so that when the day of evil comes, you may be able to stand your ground, and after you have done everything, to stand.
And: "Whom Shall I send, and who will go for us?" next to pictures if US soldiers.

(see the memo covers slideshow at http://men.style.com/gq/features/topsecret)
Now, former French Premiere Jacques Chirac's memoir reveals what Bush told him about the impending invasion of Iraq: "This confrontation is willed by God, who wants to use this conflict to erase his people’s enemies before a New Age begins.”

He apparently also told Chirac that the Biblical creatures Gog and Magog were hard at work in the Middle East and had to be defeated. (link) 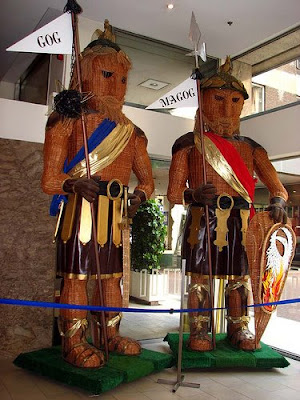 Now, in all my years of Sunday School, I do not ever remeber hearing about anyone named Gog or Magog, so I did a little research. Apparently, Magog is mentioned first:
Genesis, 10:2-4: The sons of Japeth: Gomer, and Magog, and Madai.

Then in Ezekiel, Gog appears, and he is the ruler of a country named Magog:

Son of man, set your face toward Gog, of the land of Magog . . . and prophesy against him

So one would think that, if these two characters lived in Old Testament times, they could hardly be considered a threat in 2003, but that just shows what you know! because they pop up again in Revelations, the last and craziest book of the New Testament:

Rev 20:6-10 And when the thousand years are ended, Satan will be loosed from his prison,and will come out to deceive the nations which are at the four corners of the earth, that is, Gog and Magog, to gather them for battle

And that's about it.So even if you are the sort of true believer that takes every word of the Bible literally, there's really no way to tell who or what these names refer to. So how did they become a part of "end-times" lore? Here's what I was able to find on the Google:

So how, exactly George W. Bush came to believe that Gog and Magog were alive and well and in need of stopping, I can't fathom. I guess you would need to journey into the world of Pentecostal theology, and I'm just not willing to risk it.

So we invaded Iraq, got (as of last count) over 4,300 of our finest young people killed, over 30,000 wounded, and God knows how many Iraqis killed and maimed because George thought that God had called on him to fulfill some vague prophecy that seems to exist only in the minds of the snake-handlers and tongue-speakers who think that God speaks to them directly. I've said it before and I'll say it again, if you talk to God, that's prayer. If God talks to you, that's schizophrenia.
Posted by Professor Chaos at 6:14 PM No comments:

Former Wilco member Jay Bennett died this Saturday of as yet undetermined causes.

Posted by Professor Chaos at 5:54 PM No comments: