First of all, This is their spokesman. 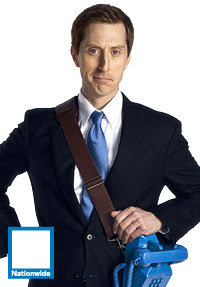 This is the sort of guy that you would cross the street to avoid, because just by looking at him you know he's going to be fingernails-on-a-chalkboard irritating.

And sure enough, he is.

And they bill him as:

The World's Greatest Spokesperson in the World

That's not funny. Not clever. That's the sort of thing I would come up with if I were pressed for time and sleepy and had no respect for my readers.

And if they have this great deal for safe drivers, why isn't it offered to the general public? You can only get this deal if this creepy turd-bag shows up at your house and you ask him personally for a special deal? That's total bs!

And when they tell him about the special deal, he gags? Who gags at good news? I gag when I see the Nationwide guy, but not out of excitement for the good deals he has to offer. Maybe he caught a glimpse of himself in the mirror. That would make me gag, if I suddenly was reminded that I was this guy:

And at the end, he says "hook, line and sinker!" as if that was a positive thing to say. Do the copy writers not know what that expression means? It's the sort of thing one says when one has swindled or snookered someone. "Hey, did the sucker buy it?" "Oh, yeah, hook line and sinker!"
Are we to understand that he is proud of having bamboozled this nice lady?


My worst fear is that this guy will end up marrying Flo from Progressive.

Can you imagine the horrible child they might produce?