A Post that begins with Emma Watson, then digresses pretty quickly


I don't really know much about Emma Watson. I think she was one of the kids in the Harry Potter movies. The one who isn't Harry Potter. I'm guessing the one on the right?

I had heard that she was some sort of UN envoy for women or something equally admirable, so I figured I liked her whoever she was.

Anyway, today she popped up twice on Yahoo News headlines:

How cool is that?
Wait, it gets better.

Riders on London’s Central line train may have gotten a surprise from Emma Watson.
The actress and activist has been sneaking books onto the train according to Time Out London. Watson has been placing copies of Maya Angelou’s novel Mom, Me & Mom along the underground train network, including the escalators and documented the escapades on Instagram.

Mom, Me & Mom is the current book for Watson’s bi-monthly Our Shared Shelf  Book Club and her Books on the Underground project. Our Shared Shelf brings readers all over the world together to discuss feminist books. Watson left approximately 100 books for readers to find, all containing a hand written note from her. Those who find the books are urged to read them and then pay it forward by leaving it on the train for someone else to find.

I knew it! I knew I liked her! Nothing could possibly shake my opinion of Emma Watson! Did I mention that she popped up twice? 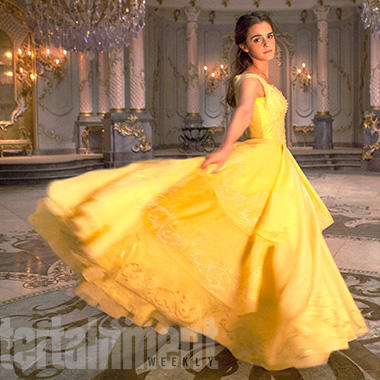 Disney has been very tight-lipped about its live-action "Beauty and the Beast" movie coming out...

Really? Beauty and the Beast? Really?
The movie that teaches boys that if you want a girl to fall for you, just kidnap her and if you hold her prisoner long enough, she's bound to eventually see what a swell guy you are deep down inside and totally want to make out with you.
And the movie that teaches girls that, sure some men may seem like monsters, but don't give up on them. If you spend enough time with a monster, especially one that holds you against your will, eventually he's bound to drop the gruff facade and then hello Prince Charming!

Oh, and also, the movie with the song "Be Our Guest" which has this to say about the serving classes:


Life is so unnerving
For a servant who's not serving.
He's not whole without a soul to wait upon

Yes, that's right. The reason some people have roles in the service industries? Because they LOOOOOOVE it! They were born to fulfill this destiny of waiting on the more fortunate, so there's really no reason to thank them or be polite or be a decent human being when dealing with your waiter or waitress. After all, you're really doing them a favor by allowing them to fulfill their destiny.

Soup du jour
Hot hors d'oeuvres
Why, we only live to serve

They live for this! They aren't serving because there were no better job options. There's really nothing they'd rather be doing.


Of course, that wasn't the first time that Disney has taught kids that people with difficult, low-paying jobs are actually happy doing them and really wouldn't even want to try to better their station.  Take Dick Van Dyke's chimney sweep in Mary Poppins:

Really? Lucky? Because honestly, to me it seems that a chimney sweep is stuck on the bottommost rung of the ladder of life.

Look at this lucky stiff!

I mean,  he'll be a stiff any day now, what with the black lung disease and all.


And you know, it's one thing to say, "Hey, even though I have this terrible job breathing in ashes and smoke for shit wages, I have my friends, my wife loves me, all things considered, I'm a pretty lucky guy." But that's not at all what he's saying. He's saying he's lucky because he's a chimney sweep. For some inexplicable reason, he wants us to believe that the chimney sweep life is something that only the lucky few get to experience. So we certainly needn't push for regulatiuons to make dirty, dangerous jobs less dirty or dangerous. Or try to increase the wages of the people who do them. No! Thy are living the fucking dream!

Although, I guess that's less offensive than teaching people that if you run across an unconscious woman it's make-out time!