The federalist is a never-ending supply of weirdos.

Is there a bigger collection of weirdos than the Federalist?

Spoiler alert: There is not.


Why Even Non-Christians Lose From Growing Ignorance About The Bible


This is a loss not only of the Bible or Christian faith but a severing of his connection to all the other aspects of a culture that ought to have been ours.

Okay, I normally like to begin at the beginning of these things, but I want to jump ahead to a section that is, in my opinion emblematic of the kind of work they do over at the Federalist:

Where in the past we could hope that the general population would pick up a good bit of biblical teaching from a book, film, or at least a department store, we now live in a world where that’s all in the past. Google willgladly doodle out about Hannah Glasse’s 310th birthday or the 30th anniversary of Pi day but, come Christmas time, it will merely say “Holidays 2018.” Come Easter, and it will celebrate nothing at all.

Now you might think that surely this guy has studied the Google Doodle archives before making such a claim, but you would be wrong. And why were you even thinking that? Did you think that little quote was going to turn out to be true? Then there'd be no blog post!  How would I get to be all sarcastic and snotty about a true statement? Come on, people. Think!

Anyway, I Googled Google Doodles and it took me about ten seconds to come up with these:
. 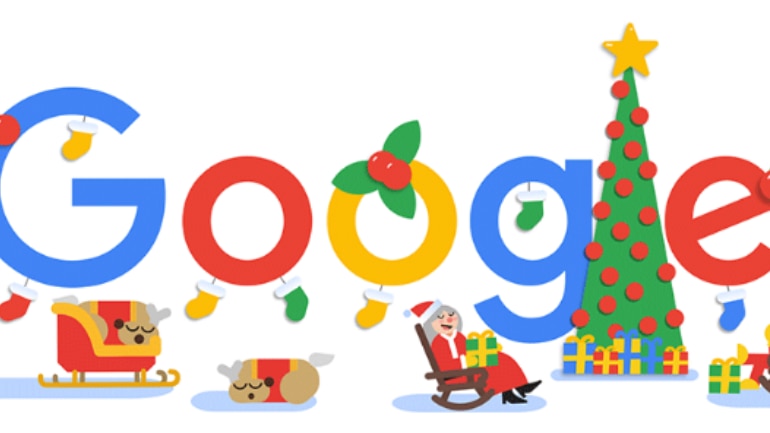 Google Doodle has churned out another festive design for Christmas with a decorated Google logo including Christmas ornaments. Check out important facts about the festival and the other doodles of he season.

Now you could certainly complain that Google's holiday doodles are all secular in nature, but that's not what he claims. He says " come Christmas time, it will merely say “Holidays 2018.” Come Easter, and it will celebrate nothing at all."


This, of course, illustrates the first law of conservatives: No conservative will ever argue anything honestly.

Okay. So now let's go back to the beginning.


One short conversation from graduate school stands out above all the others. It was during a cigarette break. (This was back when Californians could still have a cigarette break, having not yet been legally turned into the less-social smartphone break.)

And there it is again. You can still smoke cigarettes in California. You can't smoke in an office or a classroom or other enclosed area where other people have to breathe the air into which you are blowing smoke, but smoking has not been made illegal in the state of California.

The class had been discussing a modern novel and I had perked up with a comment about how the author had put an unattributed quote from the Psalms in a character’s mouth. It wasn’t the first time I had offered this sort of insight in class, but I tended to keep these observations casual so as not to draw too much attention.

During the break, my oh-so-hip San Francisco-dwelling classmate turned to me and asked, “How did you know that about the Psalms?” I explained that I was a Christian and sheepishly confessed that I read the Bible pretty regularly. He looked at me with longing and confessed in turn, “I wish I knew the Bible.”


Mm hmm. Yes, I'm sure that is exactly the conversation that occurred. This San Francisco hipster who had managed to graduate college and was working on a post-graduate degree had always wanted to know more about the Bible but had never been able to conceive of a way to learn about it. He never figured out that he could walk into any bookstore, purchase a copy of the Bible and, you know, read it. Oh how he envied you and your knowledge of how to avail oneself of book learning!


I didn’t know how to respond. I had spent most of my young life avoiding letting people know just how well I knew the Bible. In thousands of veiled and unveiled ways, it had been clear to me that having spent evenings and weekends reading, studying, and memorizing the Bible made me odd.

Not exactly. Being odd made you spend your nights and weekends memorizing the Bible.


The lack of biblical literacy has been catalogued by various polling firms and lamentedfrom countless pulpits (or at least at pastor support groups), but no one is cataloguing the emptiness of a culture without a sacred rock at its foundation. It isn’t catalogued because it isn’t quantifiable.


It isn't cataloged because it doesn't exist.


I’m not talking here about the value of religious belief, although I’d be interested in discussing that on wholly other grounds. I’m talking solely about about education and culture. My graduate school friend desired a particular educational experience of being formed as a child by a tradition that included the biblical authors, plus Dante, Shakespeare, Milton, Fielding, Dostoevsky, Melville, Faulkner, and so many more. My friend was sad that he, being now older and done with his education, couldn’t go back and be formed the way these and countless other authors and artists were formed.

Oh, God! Are we doing this again? Is it 1992 again? Are we seriously going to trot out the old "Boo hoo, kids aren't reading enough dead white men anymore" bullshit?

Good heavens, the Canon! Why, if children aren't required to read every bit of the sacred Canon, society will disintegrate! What if they read James Baldwin or Alice Walker or Isabelle Allende? Think of the consequences for society!

This formation is a tradition that he, not possessing, cannot pass on. This is a loss not only of the Bible or Christian faith but a severing of his connection to all the other aspects of a culture that ought to have been his. Studying the liberal arts without any knowledge of the Bible is to dine without salt.

Yeah, that checks out.


Then he goes through the part where the Google doodles aren't doing enough to educate the young about the cultural and social implications of the Hebrew scriptures. Then on to his next silly point.

Thankfully, however, with just a little bit of intentionality, most people can enter into this tradition of learning. My kids, for example, really get a kick out of the “What’s in the Bible” DVDs, which are instructive and entertaining, even for adults. But the real McCoy is to dig into the Good Book itself.
For that I recommend finding a local organization that runs Bible-reading groups like Bible Study Fellowship or Intervarsity Christian Fellowship. These groups tend to have plenty of non-Christians in attendance

No they don't. No they fucking don't. What non-Christians are attending Bible-reading groups? It's like saying there are a lot of heterosexual men in attendance most nights at the Nob Hill Male Theater.

These groups tend to have plenty of non-Christians in attendance and are often led by enthusiasts who make for better teachers than your average theology professor. The Good Book is also a pretty good book.


5 The sons of Japheth were Gomer, Magog, Madai, and Javan, Tubal, Meshech, and Tiras.


6 Forsooth the sons of Gomer were Ashchenaz, and Riphath, and Togarmah.
7 And the sons of Javan were Elishah, and Tarshish, Kittim, and Dodanim.
8 The sons of Ham were Cush, and Mizraim, Put, and Canaan.
9 And the sons of Cush were Seba, and Havilah, Sabta, and Raamah, and Sabtecha. And the sons of Raamah were Sheba, and Dedan.
10 And Cush begat Nimrod; this Nimrod began to be mighty in [the] earth.
11 And Mizraim begat Ludim, and Anamim, and Lehabim, and Naphtuhim,

Can't wait for the movie!


For me, the paradigm has shifted. I’m glad for all the sword drills I did as a youth and for all the Scripture I was forced to memorize.

What are SWORD DRILLS? Please tell me they are what they sound like!

sword drill n. [*sword ‘metaphor for the Bible’ + drill ‘an exercise, practice’] A competitive game for children in which the first person to locate and correctly recite a given verse in the Bible wins.
The format of the sword drill varies widely. Generally, the person leading the drill begins by saying, “Attention” and the players hold their Bible down at their side or tucked under one arm—as if the Bible is “sheathed.” Then the leader says, “Draw swords” or “Present arms” and the players hold their Bibles up in the air or straight out in front of them, as if the Bible were an unsheathed sword. Then the leader calls out a book, chapter, and verse of the Bible, and the players immediately search in their Bibles to find it. The first player to find the verse and read it aloud correctly wins.


Ugh. I should have known.


I am glad not only because I’m a Christian and because in Jesus’ death and resurrection I live, move, and have my being. I am also glad because as I continue to study and teach literature, art, philosophy, music, and history, I do not have to do so as a stranger in a strange land. Rather, I am an insider to a conversation that’s been taking place for thousands of years. 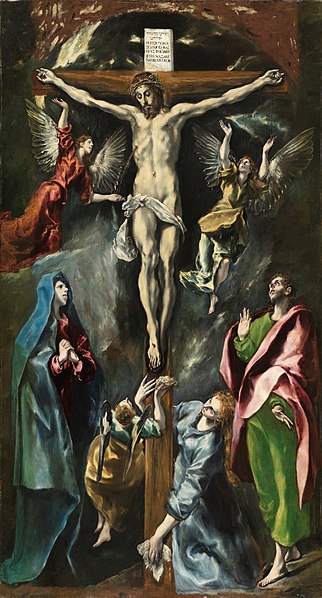 Why, that poor fellow would be baffled!
"Who is that unfortunate man suspended from the wooden T?" he might ask. "And why are none of those people helping him? And why do some of the people have wings?" Oh, he'd just be lost. There is no way to appreciate the work of El Greco without a firm understanding of the New Testament!

I look at my college students now and think about that cigarette break. If you want your kids to thrive in graduate school, send them to Bible study.

And there you have it. The worst possible reason to send your kids to Bible study. Because this nitwit seems really to think that a grounding in Jueo-Christian mythology is essential for success in graduate school!