I hate Groundhog Day way more than I can possibly rationalize. I should really have much more important things occupying the hatred centers of my mind like, I dunno, the current President, maybe? But for some reason this annual insult to our national intelligence really gets under my skin.

So today we present a look back at some of our previous Groundhog Day observations.


Can Someone Please Explain To Me

Why in the hell this

is still going on in this day and age?
Surely there isn't anyone out there who actually believes that the weather is dependent upon whether or not a particular rodent sees its own shadow. And does anyone really think that you can even tell whether he has seen it or not? How does the rodent tell you, how does he communicate this information to you? By returning to his hole? I know if I got up, went out my front door and saw Creepy McMoustache and a bunch of slow-witted ninnies popping flashbulbs in my face, I'd turn around and go back to bed too. But I wouldn't expect anyone to see my actions as a foreboding omen of weather to come.

And it's bad enough that the top-hatted nincompoop battalion

goes through this absurd charade year after year, but media outfits like Reuters, the AP, and even National Geographic cover the nincompoopery as if it were a legitimate news story. Seriously! Look:

What a story! MSNBC, your place for politics! And rodent shadow coverage!

I guess the media has plenty of time to cover retarded nonsense like this, because there's just not that much going on right now. We're only involved in two wars. That's not very many. That should occupy like what, one reporter per war? And maybe a reporter or two to look at the economy, there's not a whole lot to report on there. And there are hardly any allegations of torture coming out at the moment, and only two political parties combining to fuck up healthcare reform. So sure, ther should be plenty of reporters left to cover the fuzzy animal falderal.

Or maybe it's just that there's only one time per year that reporters get to use the phrase "Gobbler's Knob." Yeah, really.


This breaking news just in:

Wow, way to go, ABC! Way to nail down that scoop! The behavior of a random rodent is not really all that predictive of the future? Well blow me down!

An analysis by the National Climatic Data Center found there is no correlation between Phil's predictions and the actual weather.

The well-fed, revered groundhog also has a penchant for seeing his shadow. Ever since the tradition began in 1887, Phil (and his ancestors) saw their shadows 99 times, while predicting an early spring only 16 times. There was no record for nine of the years.


Of course he always sees his shadow! He's not blind. Assuming that it is actually possible to somehow determine what the little guy is actually seeing or not seeing,  wouldn't you just assume that he would see his shadow? And the 16 times he supposedly didn't see it, wouldn't that just be an indication that it's time to break in a new groundhog, because this one's losing his eyesight?

But thank God we have a free press in this country so we can read hard-hitting investigative stories like this. ABC News, give this lady a raise! 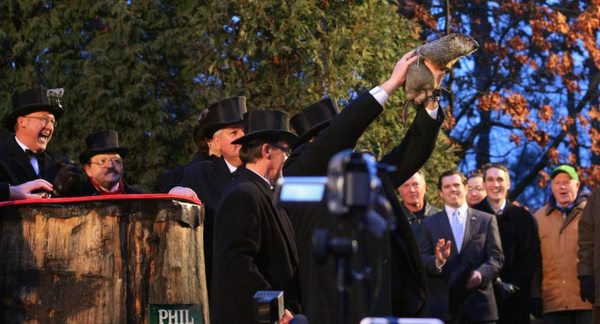