At least it's not just America.


I don't know if this is a new thing, but I only just heard of it a couple days ago on some podcast or other. There is a website called "Quillette." And holy shit, it is freakin nuts!
It seems to be based in Australia or maybe the UK,  but it does employ internet gadfly Andy Ngo as a "sub-editor." Anyway, this is the article that I heard about on the pod.

Cometh the Hour, Cometh the Man: A Profile of Boris Johnson

written by Toby Young
"Cometh the Hour, Cometh the Man" is an awfully dramatic way of referring to a clod like Boris Johnson. 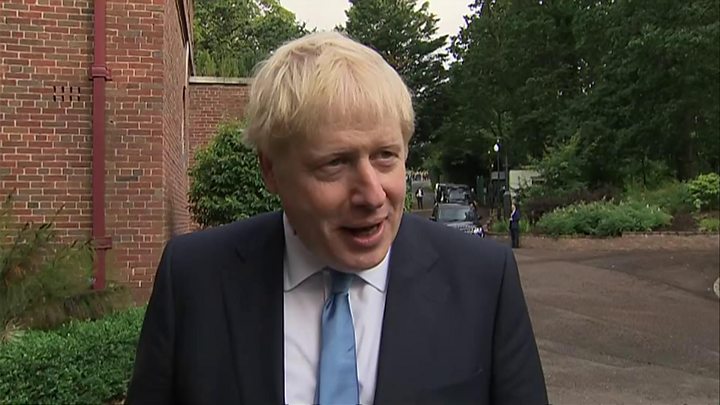 Christ, just add an eyepatch and subtract 50 pounds and he's this guy:


You know, I thought it was only American conservatives who could look at a shambling, disheveled, bloated buffoon and see a superhero,

but whatever it is, it seems to infect the British right as well.

I first set eyes on Boris Johnson in the autumn of 1983 when we went up to Oxford at the same time. . . With his huge mop of blond hair, his tie askew and his shirt escaping from his trousers, he looked like an overgrown schoolboy.

Yet with his imposing physical build, his thick neck and his broad, Germanic forehead, there was also something of Nietzsche’s Übermensch about him.

If by "imposing physical build" you mean "layered in middle-aged baby fat," and by "broad Germanic forehead," you mean "heavy cro-magnon brow," then sure. That's the ubermensch all over!

You could imagine him in lederhosen, wandering through the Black Forest

Okay, first of all, fuck you for making me picture Boris Johnson in lederhosen.
Second, yeah - I could imagine him in lederhosen. Stuffing bratwurst into his buttery face in a biergarten somewhere, but wandering the Black Forest?

Third, you're kinda tipping your hand with all the German stuff. Why not compare Johnson to some formidable British hero? I mean, you must have one, right? Some medieval king or something? When you start off by referring to Hitler's favorite philosopher, drop in the term for Hitler's super race of ideal pure Aryans and the only metaphors you have for power, strength, and toughness are all German, you're kinda giving the game away.


You could imagine him in lederhosen, wandering through the Black Forest with an axe over his shoulder, looking for ogres to kill.

Okay, yeah. I could imagine him wandering lost in a forest, looking for imaginary made-up creatures to battle. I could see him as a LARPer. 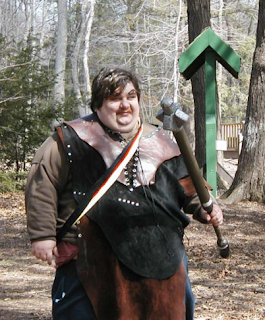 Basically, this guy with worse hair.


This same combination—a state of advanced dishevelment and a sense of coiled strength, of an almost tangible will to power—was even more pronounced in his way of speaking.


Okay, we get it. You reads the Cliff's notes of Also Sprach Zarathustra. Geez!

Also, where are you seeing "coiled strength?"

He began to advance an argument in what sounded like a parody of the high style in British politics—theatrical, dramatic, self-serious—when—a few seconds in—he appeared to completely forget what he was about to say. He looked up, startled—Where am I?—and asked the packed chamber which side he was supposed to be on. “What’s the motion, anyway?” Before anyone could answer, a light bulb appeared above his head and he was off, this time in an even more orotund, florid manner. Yet within a few seconds he’d wrong-footed himself again, this time because it had suddenly occurred to him that there was an equally compelling argument for the opposite point of view. This endless flipping and flopping, in which he seemed to constantly surprise himself, went on for the next 15 minutes. The impression he gave was of someone who’d been plucked from his bed in the middle of the night and then plonked down at the dispatch box of the Oxford Union without the faintest idea of what he was supposed to be talking about.

Yeah, now THAT sounds like Boris Johnson. And now, I assume you're going to explain how this buffoonery was actually evidence of his genetic superiority or some other such quasi-Nazi shit?

The motion was deadly serious—“This House Would Reintroduce Capital Punishment”—yet almost everything that came out of his mouth provoked gales of laughter. This was no ordinary undergraduate proposing a motion, but a Music Hall veteran performing a well-rehearsed comic routine. His lack of preparedness seemed less like evidence of his own shortcomings as a debater and more a way of sending up all the other speakers, as well as the pomposity of the proceedings. You got the sense that he could easily have delivered a highly effective speech if he’d wanted to, but was too clever and sophisticated—and honest—to enter into such a silly charade.

Of course! He meant to do that! Jesus Christ!

He couldn't possibly have just been in over his head and getting rightly mocked and ridiculed by his fellow students. No, it must be that he was screwing up intentionally. To, um. . . make some kind of a statement. About Oxford. And how they take things too seriously. That is totally the sort of thing that a freshman could get away with doing at Oxford! If there's one institution in Britain than knows how to laugh at itself, it's Oxford!

In Boris, though, it was as if I’d finally encountered the ‘real’ Oxford, the Platonic ideal.

Jeez, get a room!
Also, that rumbling you feel is Plato turning over and over in his grave.

While the rest of us were works-in-progress, vainly trying on different personae, Boris was the finished article. He was an instantly recognizable character from the comic tradition in English letters: a pantomime toff. He was Sir Toby Belch in Twelfth Night demanding more cakes and ale, Bertie Wooster trying to pass himself off as Eustace H. Plimsoll when appearing in court after overdoing it on Boat Race night. Yet at the same time fizzing with vim and vinegar—“bursting with spunk,” as he once put it, explaining why he needs so many different female partners.

Oh my God.
Oh my GOD!
So many female partners?

That's a long, convoluted way of making excuses for him being a pig.

He was a cross between Hugh Grant and a silverback gorilla. 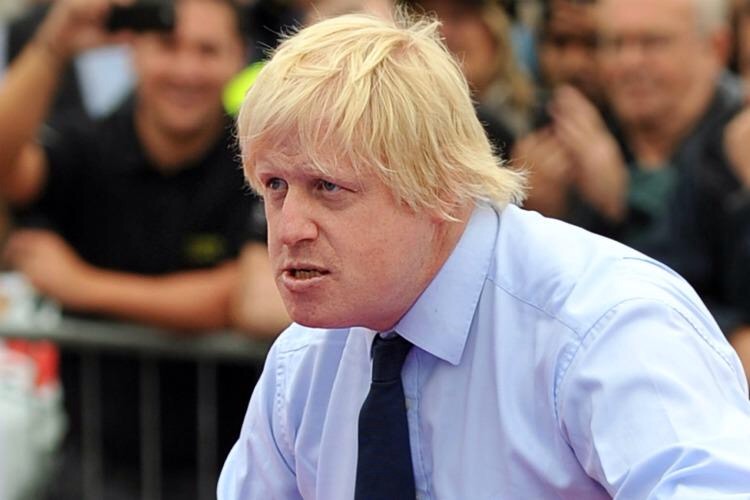 Well, you're half right!

My uncle had described him as a “genius” and as a boy he’d been regarded as something of a wunderkind.

And there you go with the German again. You just can't help yourself, can you?

There was the occasion when he was holidaying with his family in Greece, aged 10, and asked a group of Classics professors if he could join their game of Scrabble. They indulged the precocious, blond-haired moppet, only to be beaten by him. Thinking it was a one-off, they asked him to play another round and, again, he won. On and on it went, game after game.

Oh, bullshit. That never happened. You expect us to believe that this guy

a ten-year-old version of this guy, had a stronger vocabulary than a group of classics professors? It doesn't pass the laugh test!

At the prep school he attended before going to Eton, Britain’s grandest private school, he was seen as a prodigy. A schoolmaster who taught him back then told his biographer, Andrew Gimson, that he was the quickest-learner he’d ever encountered. In the staff room, the teachers would compare notes about the “fantastically able boy.”

Oh God.
Oh, no.
No no no no no no no..
What did those degenerates do to poor little Boris?
There is no way that having English private school teachers comparing notes on you in the staff room can possibly lead to anything good.
That's something out of a Morrisey lyric.

Okay, this isn't funny anymore. I'm sorry. If Boris needs a sycophantic glowing hagiography to feel okay about himself after what he went through, then by all means, go right ahead. Just maybe lay off the German stuff, huh?