Why I hate the associated press

You know what, AP? These people are not "Health care critics." A Health care critic is someone who is concerned that a government plan would cost too much, or be run inefficiently, or would result in large tax increase. Those are legitimate concerns which could be addressed with reasonable discussion.The mouth-foaming poo-throwers who are disrupting town halls are gullible paranoids driven by blatant and malicious lies. When someone like Sarah Palin (and Oh, My God, is there no depth to which she will not sink?) says that she's afraid that Obama's death panels will decide to euthanize her Downs syndrome child, she is not a critic of the presidnet's plan, she is a liar. She is a baldfaced pants-on-fire liar. I know she's not especially bright, but she's not that stupid. She has to know good and goddamned well that there are no death panels, will never be any death panels, no one has ever suggested any death panels and yet she's out there on the facebook pretending that she thinks death panels are a real possibility.

She knows that there are people out there who take her seriously. And that those people are unstable. And heavily armed. She doesn't care. She will do whatever she has to do to keep up her popularity with the lunatic fringe of the right wing of the Republican party, and keep those donations rolling in to SarahPac!

Now when something happens like what happened today, a nut shows up at the Town Hall with a firearm, carrying a sign which refers to bloodshed,* 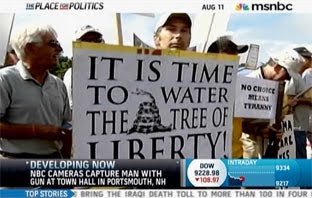 I'm looking at you, Palin. And you, Beck, and you, Limbaugh, etc. etc. Because you are riling these people up.

See, if any of the bullshit you liars are spouting about forced euthenasia and death panels and whatnot were true, then these people's panicked, angry reactions would be fairly reasonable. Now most of us have enough sense to know that you guys are full of shit, but there are people out there dumb and paranoid enough to believe you. And it's inevitable that some of these folks will turn to violence to defend the country from these imaginary threats. If someone was going to kill my Grandma, I'd go get a gun too. So when one of these people end up actually killing someone, which they will, it will be at least partly your fault.

And it's probably too late to put the genie back into the bottle. Even if, say Sarah Palin were to come out now and say, "Oh, gosh folks, turns out I was wrong about there being death panels, don't ya know, just forget I said anything," most of the nuts would just say, "Oh shit! They got to Palin!" and become even more paranoid. But at least you owe it to the country to try. Maybe you could, um, quit makin' stuff up?

*The guy's sign says, "time to water the tree of liberty" which seems to refer to the quote from Thomas Jefferson: "The tree of liberty must be refreshed from time to time, with the blood of patriots and tyrants."
Posted by Professor Chaos at 5:08 PM 2 comments:

I wonder who could it have been?

Oh, I don't know, could be anyone really.

Could be someone we know, maybe a friend,

Could it have been 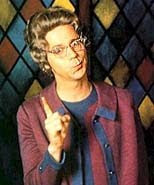 SATAN?
Posted by Professor Chaos at 4:51 PM No comments: