It's so predictable. Conservatives come up with a story, story gets debunked, conservatives double down on the original story. 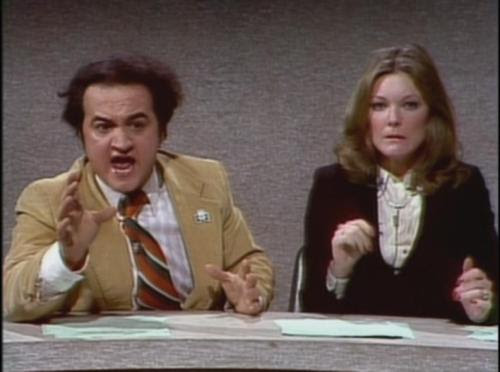 Noooooooo!!!!
﻿
Instead they are going with the theory that just because a story isn't true doesn't mean it's not a good story!
Tucker Carlson defends Logan on Benghazi:
‘Sometimes the best stories have flaky sources’
Speaking to Fox News media critic Howard Kurtz on Fox & Friends, Carlson complained that MSNBC had not fired host Martin Bashir over improper comment about Sarah Plain but Logan had been asked to take a leave of absence after several other media outlets determined that her primary source had lied about being at the U.S. mission in Benghazi during the Sept. 11, 2011 terrorist attack.
“Where’s the justice?” the Fox News host asked.

Yeah, what an injustice!
Of course, there is a subtle difference. Bashir said something offensive and distasteful, but it wasn't a lie. You're actually not supposed to lie on the news. I mean, I know you can over there at FOX, but real news organizations have these things called "standards." ﻿
Kurtz pointed out that even 60 Minutes was now convinced that Logan’s source, security contractor Dylan Davies, was not telling the truth and that the network never should have allowed Logan to use him in the the report.
“He told a different story to his bosses, he told a different story to the FBI,” Kurtz noted. “At the very least, he has severe credibility problems, which makes me wonder how this story ever got on the air. And while I admire what Logan had done in the past, risking her life in war zones, this was a failure of journalistic effort.”
“Yeah, well, you know as well as I, some of the best stories have flaky sources unfortunately,” Carlson concluded.

Wow. A "flaky source?" It's one thing to be "flaky," it's another to have no actual knowledge about the event for which you are supposed to be a source.


And it would be one thing if it was just the imbecile Carlson, but of course it's not.


Very shocked,” Huckabee said. “And I think that the fact is that we’re missing the big story here. We still don’t know what happened in Benghazi. Our government lied to us, they covered it up.”
“Lara Logan is certainly a hero journalist to at least attempt to get the story out,” he added.

The guy who was on tv doesn't know anything about what happened, therefore "we still don't know what happened?" And Logan is a hero journalist for putting a liar on tv?