Seems like the last few days have been more-than-usually full of shitty people saying shitty things. Whether they're saying shitty things about Micheal brown being murdered or Robin Williams killing himself, there seems to be a contest among right-wing commentators to see who can say the shittiest thing about something tragic.

And, sure, everyone occasionally says something shitty, or does something shitty, but honest to God, you could spend the day swimming laps in a hog lagoon and then eat feces sandwiches for dinner and not approach the level of shittiness that it takes to take cheap shots at the memory of a beloved entertainer whose life has just ended tragically. Or to criticize a group of bereaved people for not grieving correctly when a member of their community is mowed down in the prime of life.

But for some reason, this shitty comment has been getting a lot of attention:


I'm not sure why this particular shitty comment has been garnering so much attention, because right-wing idiots have been trotting this out for years, ever since Ms Obama decided to make childhood obesity her issue. I think it was Rush Limbaugh who first attacked her for this.
Now, a semi-normal person, if he had an irrational hatred of the First Lady, might criticize her from the perspective of "oh, she thinks she's so great, she thinks that just because she is in perfect physical condition, she can tell the rest of us how to raise our sugar-cured piglets." Or whatever. But, no. Rush decided to take this weird approach of pretending that she has no room to criticize other people's weight, because she herself is supposedly a big fat fatty fatfat.
And one of these idiots coined the term "Moochelle," which caught on in spite of its complete detachment from any reality. Do a Google search for the word "Moochelle." You Know what you get?


About 107,000 results
Yeah, I don't get it.
I mean, if Michelle Obama did happen to be a heavy-set woman, this would be a cheap, shabby, juvenile and mean taunt, but come on, look at her!

If you blurred out her face and told people that this was a photo of the captain of the Women's World Cup team, or the new starting forward for the Atlanta Dream, people would believe you.

I mean, does she look remotely cow-like to anyone?

If you wanted to compare her to some sort of animal, I might go with giraffe, since she is rather tall and quite slender. Maybe you could get some kind of laughs from that comparison? I don't know, but Moochelle? How much blinding, irrational rage do you have to have for the woman to look at someone who is the very picture of physical fitness and star making cow noises? How far off the rails do you have to have gone to convince yourself that Michelle Fucking Obama is overweight? Jeezus, she could be the third Williams sister!

Oh, maybe she is!

So, in the spirit of the Rush Limbaughs of the world, I would now like to present snarky comments about past prominent persons in American History.

Geez, Ike, why don't you control that unruly mop on your head?
You're the President, for God's sake, not a Beatle! Buy a comb, why dontcha?

Dang, look at this scrawny little wimp. How is America supposed to project an image of strength with this 98-pound weakling at the helm?

Ooh, look at me, I won the Civil War! I freed the slaves! Sounds like someone's overcompensating for his Napoleon complex! Get over it, shorty! 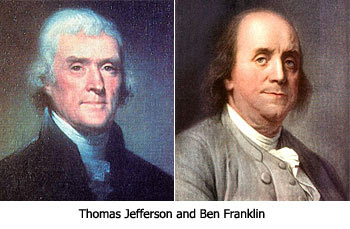 Oh, man, look at these two prudes! I bet neither of these Puritans has ever gotten laid!