Because every election year the conventional wisdom has to be that Democrats need to distance themselves from their voters and try to be more like the GOP, this op-ed appeared in today's Times:

To Win Again, Democrats Must Stop Being the Abortion Party


Thomas H. Groome is an author, academic and former priest. He is a professor in theology and religious education at Boston College.[1]
Groome was born in County Kildare, Ireland. Groome studied at St. Patrick's, Carlow College and was ordained as a Catholic priest in 1968.


Oh, well. An Irish Catholic theologian. Obviously, he's got his finger on the pulse of the American electorate.

. . . once-solid Catholic support for Democrats has steadily eroded. This was due at least in part to the shift by many American Catholic bishops from emphasizing social issues (peace, the economy) to engaging in the culture wars (abortion, gay marriage). Along the way, many Catholics came to view the Democrats as unconditionally supporting abortion.


If you mean unconditionally supporting the rights of women to choose whether or not to have an abortion, a position shared, by the way, by a majority of American Catholics, then yes. That is an accurate view of most Democrats.

Last year’s election was a watershed in this evolution. Hillary Clinton lost the overall Catholic vote by seven points — after President Obama had won it in the previous two elections. She lost the white Catholic vote by 23 points. In heavily Catholic states like Pennsylvania, Wisconsin and Michigan, she lost by a hair — the last by less than 1 percent. A handful more of Catholic votes per parish in those states would have won her the election.


So, to sum up, in the last 3 Presidential elections, the pro-choice candidate has won outright twice and lost once while getting 3 million more votes than her opponent. And this is due to what, exactly? Pennsylvania Catholics becoming more pro-life since 2012?
Or maybe it has more to do with the fact that a large percentage of American voters were stupid enough to believe that the guy with the solid-gold toilet spoke for the American working class while the former Secretary of State ran a child-prostitution ring out of the basement of a local family restaurant.

She lost Michigan, as you say, by a "hair." A few more catholic votes might have pushed her into the win column. So might a few more Muslim votes. Or Jewish votes. Or Scientologist votes. Or maybe she might have gotten more "urban" votes had she gone to Flint and raised holy Hell about the water there. Maybe she might have gotten more progressive votes had she gone to Standing Rock and said "Mr. President, do not allow this pipeline!" But sure, the smart move obviously would have been to take the anti-choice position, garnering a few extra votes from conservative Catholics whilst completely alienating the entire Democratic base.

Oh, hey, maybe she could've come out against marriage equality and pushed "right-to-work" laws while she was at it.

In its directive, “Forming Consciences for Faithful Citizenship,” the United States Conference of Catholic Bishops make clear that American Catholics do not need to be single-issue voters. The bishops say that while Catholics may not vote for a candidate because that candidate favors abortion, they can vote for a candidate in spite of such a stance, based on the totality of his views. Yet despite that leeway, abortion continues to trigger the deepest moral concern for many traditional Catholics, including me.

Well, there's good news and bad news on that front. The good news is that there are fewer and fewer "traditional Catholics" in America these days, as more and more people leave the Catholic Church. The bad news is that the Church has accomplished this by allowing itself to become a safe haven for child molesters. But sure, go ahead and get on your high horse about abortion and "moral concerns."


Also, not to nit-pick, but generally, academics do not use the phrase "including me." They usually say "including myself," or "including this author."


Polls indicate that the nation holds mixed views about abortion. About 80 percent of Americans don’t want to criminalize it again. At the same time, at least 60 percent of Americans — and most likely a higher percentage of Catholics — oppose abortion after 20 weeks of pregnancy. Yet despite the clear complexity of those attitudes, political discourse largely ignores the possibility of a middle ground between making all abortions legal or prohibiting them entirely. Mrs. Clinton, like most Democratic politicians, fell into this either/or trap last year.


Oh, and Trump didn't? The guy who said that there should have to be some kind of punishment for women who terminate pregnancies? The guy who promised to nominate anti-choice judges from a list given to him by the Heritage Foundation? That guy didn't fall into the "either/or trap?" 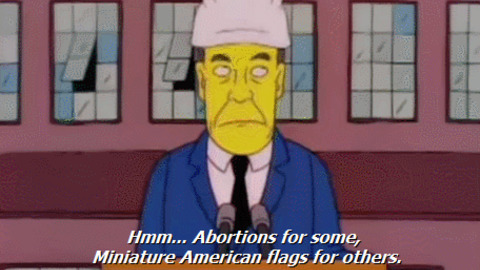 When asked about abortion in the third presidential debate, Mrs. Clinton focused on the importance of a woman’s right to choose, saying: “I strongly support Roe v. Wade.” But in making it appear as if she was viewing a wrenching moral decision only through a legal lens, she was losing many Catholic and evangelical voters.

Oh, right! Because Catholic and Evangelical voters were all gung-ho to vote for the woman that FOX and Rush have been telling them is the embodiment of evil since the 1190's. It was only her overly-legal take on Roe v Wade that lost her the Progressive Evangelical voting block!

Somehow, Ms Clinton's failure to acknowledge that aborting is a difficult decision before supporting the right of women to make that decision caused these voters to instead pull the lever for the candidate who has no concept of what a "wrenching moral decision" is and just says what the hell, let's outlaw it!

For them, her uncompromising defense of Roe was comparable to telling a group of Quakers, “I’m in favor of war,” without even mentioning preconditions.

No. No that's not similar at all. Because "I'm in favor of war" is an insane thing to say without a whole lot of context around it. Like, if one were to say "since the Japanese have bombed Pearl Harbor and killed Americans and have shown no signs that they plan to cease this kind of aggressive action, I have to say that I am in favor of war with Japan," that makes sense. That's something reasonable people can debate. Butj ust as a generality "I'm in favor of war," that's fucking insane.  Whereas, I'm in favor of letting women make their own decisions about their reproductive systems" really doesn't require a lot of context.


Mr. Trump, in contrast, offered a graphic description of “ripping the baby out of the womb in the ninth month, on the final day,” as if this were standard procedure. (More than 90 percent of American abortions are in the first trimester.)

Right. And if only he had acknowledged what a difficult, heart-wrenching moral decision this was, perhaps he could have carried the Catholic vote, oh wait.
I guess it's only pro-choicers who have to couch their stance in the language of heart-wrenchery and moral quandritude.

Also, does it not matter to you that she was honest and he was lying? Or is that not the kind of moral issue that conservative Catholics care about?