Here's a 4th of July story from CNN.com:

The following may cheer those who complain that Jews exercise too much influence in the American political system.

“The massive overrepresentation of Jews on Capitol Hill, long a source of pride for the community, has been shrinking in recent years and could drop in the coming election cycle from 41 to the mid 30s, a level last seen 15 years ago,” Nathan Guttman recently wrote in The Forward, the Jewish newspaper.

Look, we're totally not being racist, because we're quoting a real live Jew!

“It is the drawing down of a generation that believed in civil service,” Jacques Berlinerblau, director of Georgetown University’s Jewish civilization program, told Guttman, citing generations of post-World War II American Jews who, as Guttman phrased it, “saw special value in entering public service and also in reaching beyond the interests of their own community.”

Berlinerblau expanded on the subject in The Chronicle of Higher Education:
In my own writing I have referred to this half century as the era of 'secular Yiddishkeit.' It was the moment when the children of immigrant Jews of Eastern and Central European appeared to take over the world.

So, yeah, they're pretty much running things. I mean, 7 percent! That's practically a majority!


Kurt Stone, a political science professor at Florida Atlantic University and author of two books on Jews in Congress, told The Forward that the decline in Jews in Congress "won’t matter much in terms of the Jewish agenda.”

the Jewish Agenda? I was going to say that sounded really anti-semitic, but I looked him up, and he is an ordained rabbi. So, I guess not. Although his bio says that he is a Dodger fan, which is almost as evil as being an anti-semite.
Also, is it bad that when I read the phrase "Jews in Congress" I hear it being shouted like "Pigs in Spaaaaaace!!!" Probably. 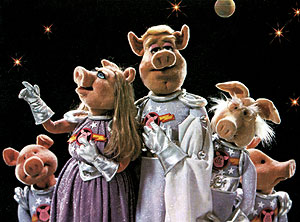 Reports Guttman: “Changing demographic realities are pushing Jewish activists to seek a political partnership with Latinos, America’s fastest-growing minority group, for help in supporting the U.S.-Israel relationship.”
Because there's nothing Latinos care about more than the US-Israel relationship. In fact, improving that relationship is one of their primary GOOOOOOOOOOAAAAAAALLLLLLLLs!

Okay, that was definitely bad. Although, in my defense, it's not nearly as bad as CNN.com publishing an article designed specifically to cheer up people who think there are too many Jews in Washington.

I always thought so!
Posted by Professor Chaos at 5:51 PM No comments: