On page 2 of today's Atlanta Journal Constitution was this headline:

For some reason, they apparently didn't think this story was important enough to include it on their website. I found the story posted on "Democratic Underground"

here's what the New York Times is reporting:

In the final days before the Deepwater Horizon disaster, BP continued drilling for oil despite internal reports of a leak on a critical safety device on the rig, a company official testified on Tuesday.

What a shock! A corporation ignoring safety! Well, I never!

Ronald Sepulvado, a BP well site leader, said he reported the problem to senior company officials and assumed it would be relayed to the Minerals Management Service, the federal agency that regulates offshore drilling. The leak was on a control pod connected to the blowout preventer, an emergency mechanism that failed to activate after the April 20 disaster.

See, now here's the problem with that. Why is the MMS sitting around waiting for BP to report safety problems? Why aren't they out there doing inspections and finding the problems themselves. Do cops sit around the precinct waiting for crooks to come turn themselves in?

He could not explain why the company did not respond to his report.

Oh, I can. I can explain that one. Um, they did not respond to your report because it seemed financially expedient to not do so. If they relay the information to the proper authorities, then they have to shut the rig down and make expensive repairs. They decided to roll the dice, save the expense upfront and just hope that nothing would go wrong, at least nothing for which they could be held liable.

Investigators also pressed Mr. Sepulvado about two audits that found problems with other equipment on the rig and the well it was drilling, including the blowout preventer, known as a BOP.
“In both of those audits, it indicated that the BOP was well past” its inspection date, said Jason Mathews, a panel member.
The audits of the rig were conducted by BP in September 2009 and by ModuSpec in April 2010. The company’s audit identified problems with the rig’s engines, ballast systems, thrusters and drilling equipment, and as a result, BP scheduled the rig for a shipyard visit in early 2011.

So in 2009, their own audit (and why the hell they get to do their own audit is a whole other problem) their own audit showed a bunch of problems, so they scheduled it for maintenance TWO YEARS LATER? If you see that your car's brakes are shot, would you think, gosh, that could cause an accident, I could maybe even kill someone, I'd better see if my mechanic has any openings in 2011?" Of course you wouldn't. But that's because you have a soul and a conscience and common sense. BP has none of those things. No corporation does. Corporations are not people. They may be run by people, but they are not people. And, hell, we don't just trust people to do the right thing on their own. That's why we have cops and jails and courts and laws, because we know that people, who presumably have consciences and empathy, will sometimes do very bad things if left to their own devices. So why would we expect a soulless, faceless entity like a corporation to behave any better? And yet we keep hearing certain people repeatedly calling for less and less regulations on businesses. It's goddamned insane. No company should be allowed to do anything as potentially dangerous as deep-sea oil drilling without an enforcement agent looking over their shoulder every step of the way. Because we've seen what happens otherwise.

And any individuals within BP who were responsible for the decision(s) to cut corners on safcety should be held criminally and civilly liable. Tony Heyward and his cronies intentionally took reckless risks with safety and 11 workers died as a direct result. These assholes need to do time, then be sued into the poorhouse by the families of the victims, as well as every fisherman, shrimper, hotelier, and boat operator whose livelihood was destroyed by their thuggish behavior.

On Law & Order, it's called "depraved indifference," and Jack McCoy has sent better men than Tony Heyward to prison on that charge. 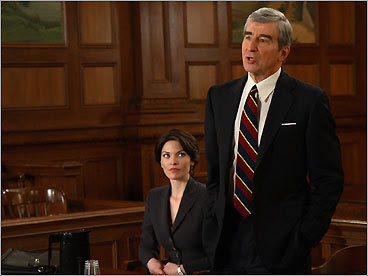