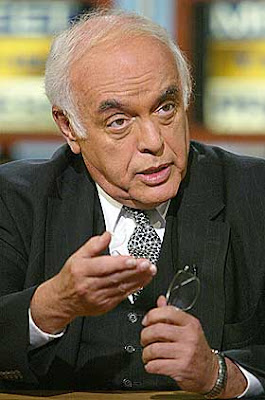 Thomas Sowell is a Fucking Liar

With these sterling credentials, you know you're getting a loonie or a liar. It's generally a good rule of thumb that anyone associated with the Hoover Institution should be implicitly distrusted.

But here's Mr. Sowell's column on healthcare that ran in today's paper:

Let's see how many lies we can find, shall we? The column begins:

There was a time when rushing a thousand-page bill through Congress so fast that no one has time to read it would have provoked public outrage.

That time must have been pre-PATRIOT act, but this sentence is not technically a lie.

The current "health care" bill threatens to take life-and-death decisions out of the hands of individuals and their doctors, transferring those decisions to Washington bureaucrats.

That is a lie. It is a lie because life-and-death decisions are NOT currently in the hands of doctors, they are in the hands of insurance company flacks whose job it is to minimize payments. So there's one.

The mainstream media are again circling the wagons to protect Barack Obama, but this time it may not work.

That is a lie. They are doing no such thing. The mainstream media insists on presenting this as a "debate" or "controversy" as if those on Mr. Sowell's side of the dispute are putting forth reasonable arguments for their position rather than screaming COMMUNISM! and DEATH PANELS! So that's lie number two.

One of those front-page editorials disguised as a news article in the New York Times begins: "The stubborn yet false rumor that President Obama's health care proposals would create government-sponsored 'death panels' to decide which patients were worthy of living seemed to arise from nowhere in recent weeks."

See, that's an example of a newspaper stating an obvious fact. That this particular fact happens to be that the president's opponents are LYING about "death panels" does not mean that the Times is rallying around the president. They are just telling the truth. (I know that's a foreign concept to you Hoover Institution types, but look it up in the dictionary.)

Nowhere? Dr. Ezekiel Emanuel is "Special Advisor for Health Policy" for the Obama administration. That's nowhere? He is also co-author of an article on Americans' "over-utilization" of medical care in the June 18, 2008 issue of the Journal of the American Medical Association. Is that nowhere?

I don't know if that's technically a lie so much as it is just fucking stupid, so I'll give Mr. Sowell the benefit of the doubt.

Dr. Emanuel's article points out that Americans do not visit doctors or go into hospitals more than people in other industrialized countries. In fact we go to both places less often than people do in those other countries, which include countries with government-controlled medical care. As the article points out, "It is more costly care, rather than high volume, that accounts for higher expenditures in the United States."

There are more Magnetic Resonance Imaging (MRI) devices per capita in the United States, more coronary bypass operations and Americans use more new pharmaceutical drugs created within the past 5 years.

Americans also have more of what the article calls "amenities" with their medical care. "Hospital rooms in the United States offer more privacy, comfort and auxiliary services than do hospital rooms in most other countries."

In other words, it is not quantity but quality that is different — and more expensive — about American medical care. This is what Dr. Emanuel's "over-utilization" consists of.

At one time, it would have been none of Dr. Emanuel's business if your physician prescribed the latest medications for you, rather than the cheaper and obsolete medications they replaced. It would have been none of his business if you preferred to have a nice hospital room with "amenities" rather than being in an unsanitary ward with inadequate nursing care, as under the National Health Service in Britain.

That is a lie. Hospital wards in Great Britain are certainly not unsanitary. "Inadequate nursing care" is a matter of opinion, so that is technically not a lie, but it can probably be classified as bullshit.

The involvement of government gives Dr. Emanuel the leverage to condemn other Americans' choices

Actually, anyone can condemn other Americans' choices. Watch, I'll do it now: I condemn the choice of many Americans to subject themselves to the asinine drivel of Thomas Sowell. See? No government involvement.

As for a "death panel," no politician would ever use that phrase when trying to get a piece of legislation passed. "End of life" care under the "guidance" of "some independent group" sounds so much nicer — and these are the terms President Obama used in an interview with the New York Times back on April 14th.

Technically not a lie. No politician would use the term "death panel" and 'end of life care" does sound nicer. But clearly intellectually dishonest. Just because those two statements are technically true doesn't mean that they form any sort of larger truth in tandem. It's like saying "adorable, fluffy bunnies" sounds a lot nicer than "prison rape." True, but if you're implying that "adorable fluffy bunnies" is somehow code for prison rape, as in "Tony da weasel got adorable fluffy bunnied in da showers," then you are full of shit.

But when you select people like Dr. Ezekiel Emanuel to give "independent" guidance, you have already chosen a policy through your choice of advisors, who simply provide political cover. The net result can be exactly the same as if those providing that guidance were openly called "death panels."

That is a lie. Actually several lies. The first lie is that end-of-life counseling would be provided by the doctor of one's own choosing, probably one's primary care physician. But not by Dr. Emanuel. Dr. Emanuel is an advisor tho the president, he certainly would have neither the time nor the authority to make end-of-life decisions for every senior citizen in the country. Nor would he want to. (full disclosure, I have never met Dr. Emanuel, I am simply going with the assumption that he is not a drooling maniac)

It is also a lie that the net result of end-of-life counseling would be the same as "death panels." That is a disgusting lie, and Mr. Sowell should be ashamed of himself. Doing end-of-life counseling has to be extremely difficult for any doctor, especially when he or she has established a relationship with a long-time patient. Doctors go through this emotionally draining process in order to minimize the suffering during the patient's last days on Earth. To equate this with "death panels" is not only dishonest, it is morally offensive.

So that's what, six lies? In one column? Not counting weaselly half-truths, and disingenuousnesses. (I think that's a real word)

Given the evidence, I can come to only one conclusion.

Thomas Sowell is a Fucking Liar.