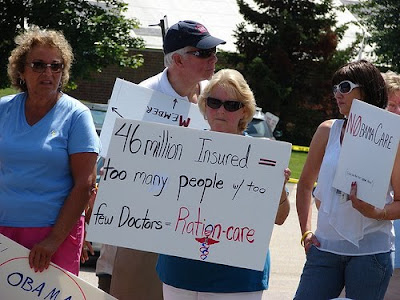 So that's the reason these people object to a National Health care system! They're actually afraid that too many people will be insured! Wow! She'd rather have her fellow Americans have no access to doctors than for her to have to wait to get an appointment.

What always strikes me as odd whenever these folks talk about "rationing health care" is that these are the same people who are always complaining about the Federal Government's reckless, profligate spending and running up deficits. Why would they think that suddenly, in this one area, the government is going to have an attack of frugality? When has the government ever said, "Oh, sorry, we can't afford that"? Even if the healthcare funding pool was to run dry, why would you think that this would be the one time in our nation's history that the federal government would say, "gosh, we can't spend money we don't have"?

They can understand that Barack Obama's mother and grandparents were white and still believe that he hates white people.

Many of them see no contradiction in stating that they want no part of a government-run healthcare program, they'll stick with Medicare, thank you very much.

Of course they also believe that the government is secretly building concentration camps in the desert, manipulating the stock market and keeping the martians under wraps, but isn't competent to run a healthcare program.

Trying to hold these kinds of contradictory beliefs in one's mind simultaneously should make your head hurt. But I guess if you keep yourself busy shouting and stomping and shaking your fists, there's really no time to reflect on these sorts of incongruities.
Posted by Professor Chaos at 8:24 PM 2 comments: 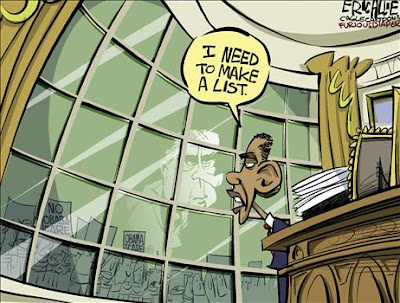 It's funny because it's factually inaccurate!
Posted by Professor Chaos at 7:18 PM No comments: 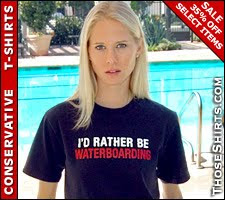 . . .to waterboard anyone seen wearing this T-shirt.
Posted by Professor Chaos at 7:15 PM No comments: