The other day, I saw someone was quoted as warning that, should the Republicans retake the House, they would do nothing but "issue subpoenas and have one hearing after another"

Now, that seems like a bit of an exaggeration, it's kind of unfair to say that they would do nothing else. Who said that? Was it you, Keith Olbermann? Was it you, Micheal Moore? Come on, 'fess up!

Oh, here it is. Here's the quote from the Minn. Post:

Okay, it was Michele "I don't know how to spell Michelle" Bachmann, the pride of Minnesota! 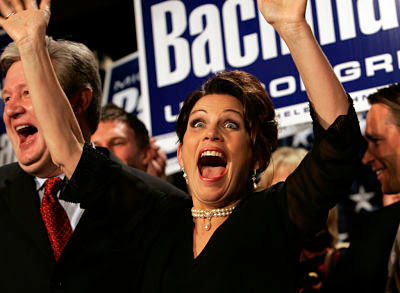 So, you've been warned, voters. At least one influential Republican has issued fair warning that she and her party have zero interest in actually governing. Here is what does interest Bachmann:

This is the year - this is it. All of our chips are on November. If we don't get it back and then starve the beast - the House, we have the power of the purse - so we can starve ObamaCare. We don't have to fund any of these programs and that's exactly what we need to do - defund all of this nonsense and then unwind it.

So that's the agenda. Do nothing positive, defund and unwind, and hold hearing after hearing to try to take down the administration. The goal is not to use government for what they think is positive ends, just to prevent the other guys from acheiving what they think are positive results. It's childish destruction as a legislative program.


And it doesn't matter that what she wants to unravel only exists in her overheated crazy little pea-brain:

one thing that you should is that the most dramatic story that's happened in the last 18 months is that the federal government - before 18 months ago, the private economy was 100 percent held in private hands. But today 65 percent of the economy is now held in government's hands - either in direct ownership or in control. This is your future we're talking about. So we got to unravel that.

This is obviously false. She could not be more wrong about this, but it's not going to matter. If this moron crackpot has subpoena power, she will use it to haul witnesses into the House chamber to grill them about their part in her paranoid daydreams.

I know it's easy to fall into the trap of feeling that there's no real difference between the parties, and a pox on both their houses. I know I fell that way a lot. And it's hard not to be really disappointed with Barack Obama and the Democrats. We should be disappointed, what with soldiers still dying in Iraq, Gitmo still open, and universal healthcare still a pipe dream. But if sane and decent people sit out this election and leave the field to the Teabaggers, this is what will happen. She's given us fair warning.
Posted by Professor Chaos at 5:27 PM 1 comment: