This Is Getting Creepy

So, first of all, here's what you need to know about the comic strip character Luann DeGroot:
(courtesy of Knight Features)

Get hooked on the life of this sixteen year-old girl.

Okay, she's sixteen. The other kids in this series of panels are her classmates, so it's safe to assume that they are also 16, or possibly 17, maybe 15, I don't know. The point is they're sixteen years old.

Okay? So here we go.

So these 16-year old girls seem to be saying that their idea of "service" is to go down to Walter Reed as eye candy for wounded soldiers. That can't really be what they mean, right?

Ok, yeah that is the plan. Go down to the hospital and get ogled at by GI's. And to be sure we don't misunderstand, they make a point of explaining the plan to school bimbo Tiffany. Surely when they get to the hospital, the first responsible adult they run into will explain that this is completely inappropriate, right?

Yeah, not so much. This doctor or administrator or whatever is all too ready and eager to toss these girls into the soldiers' rooms, adding "don't be shy!"

And the wounded veteran is portrayed as ready and eager for a little statutory rape. Unless this strip takes place in a state wherein the age of consent is 16, then it's just wildly inappropriate. And creepy. Although not as creepy as the way Tiffany is drawn, jutting her low-cut top out at the soldier.

Although this is not the first time the strip's author Greg Evans has displayed Tiffany in a far-too-suggestive way.

At least in this series, the school principal is there to act as the responsible adult and tries to get Tiffany to show some self-respect.

Anyway, back to the hospital.

Don't think that I didn't get your little double entendre there, Delta. I know your follow-up line is "morale isn't the only thing that just went up!"

God, even the orderly comes in to leer at sixteen-year-old Tiffany! I think this is supposed to be a heartwarming story of kids who selflessly decide to volunteer their time to help others, but honestly it just creeps me out.

Luann needs some cheering up in the last panel. Don't worry Luann, today is Tiffany's turn to be treated like a sex object, you had your turn earlier. Remember?

Yes Luann, you are! In the world of Luann, high-school girls working as escorts is a rich vein of family-friendly humor.
But don't take my word for it, here's more from Knight Features:

Readers of all ages love Luann, the exciting comic strip by Greg Evans that brings to life the daily drama of being a young woman.

And who has more insight into what life is like for a young woman than this guy? 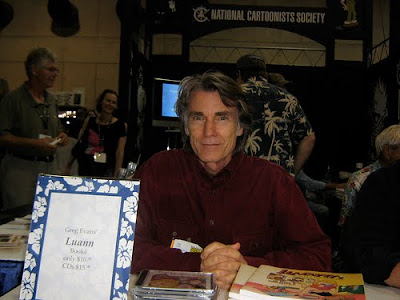 Evans is also applauded for touching on the real issues that teens face -- from puberty and unrequited love to peer pressure, drugs and alcohol.

In all storylines, Evans holds Luann up as a fine example of the positive power cartoons can have.

Yeah, not all storylines.