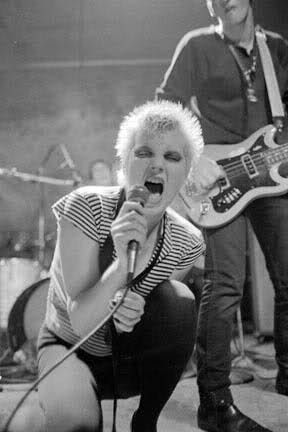 This is the part where I'm tempted to pretend I was cool enough to have known of the Avengers at the time, but sadly. . .

Anyway, I first stumbled into her when I saw her opening for American Music Club at a little dive called the Full Moon Saloon (I think) on Haight Street, and I was smitten. Both musically, and yes, I admit to having had a bit of a crush on Ms Houston. So sue me. I saw her several times with her folk music group Birdboys after that in various venues around the city. I once ran into Steven Strauss, her bass player in the men's room of the Great American Music Hall and I'm proud to say that I played it totally cool, giving him the little up-nod as if to say "howzit goin'?" instead of geeking out all over. Anyway, please enjoy, on this last Flashback Friday of Women's History Month, the great Penelope Houston.