Where Have I Been?

Well you might wonder, dear readers.
Well, I'll tell you where I have been.
I have been in a parallel universe, an alternate reality. I have been in the world of Hallmark Channel Christmas Movies. As is the case with most ventures into a parallel dimension, this began quite by accident.
Looking for Christmasy entertainment on Christmas Eve, we set the DVR to record something called "Christmas in Graceland," assuming this was going to be a concert with people performing Elvisy versions of Christmas songs and whatnot.
Not quite!

Well, we started watching because it was funny. Not intentionally funny, mind you, but funny in a Mystery Science Theater/How Did This Get Made kind of a way. I will tell you right now, no matter how tempted you might be, do NOT do this! You will be hooked. You will be sucked into the Hallmark Christmas Movie universe, a more complete, fleshed-out world than the Marvel Comics Universe or the Star Wars extended universe or whatever.  Because there is something strangely fascinating about these movies.
Let me explain.
There are rules that every Hallmark Christmas movie must follow.

It must take place in a small town. That town must take Christmas very seriously.
The main woman must be either single or widowed. So must the leading man. Because divorce does not exist in Hallmark Christmas town, Which makes sense, because no one ever argues. Husbands don't argue with wives, parents don't argue with children, no one ever has a cross word for anyone.
The closest you'll get to an argument is the leading lady saying to her best friend or sister "Oh, he's not interested in me. Besides, I've told you a hundred times, I'm too busy to date!"
Because there are no villains. No bad guys. No antagonists. What there are is people from the big city (usually San Francisco or Boston, sometimes New York) who've just gotten too busy and have forgotten what a special time of year the Christmas season is. The single or widowed woman must own a small business. One that has some sort of connection to Christmas. Often a bakery, or a decorator or party planner. That business is successful enough to keep her in a fairly large craftsman style house even though no money ever changes hands. Money never changes hands in Hallmark Christmas land. We'll circle back to that in a bit.

When the man and the woman inevitably fall for each other, they will, after sharing a single chaste kiss, decide to stay in the small town. Whichever one is from the big city will suddenly realize that they can somehow pursue their career right there in Mayberry so there's no discussion at all about the couple maybe relocating to San Francisco or New York. 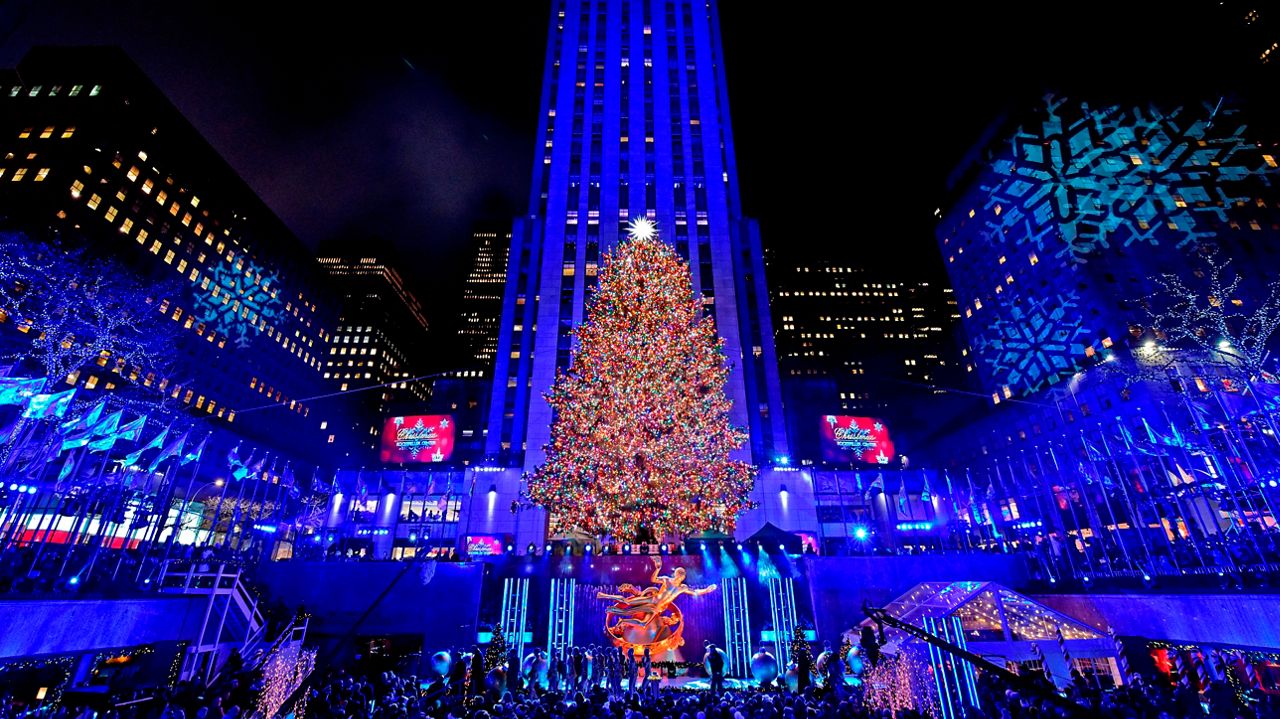 Where, remember, they don't really get the importance of Christmas.

Then there's a sort of checklist of activities.
The main characters must, at some point:
Cut snowflakes out of paper.
Drink hot cocoa.
Ice Skate.
Make cookies.
Make and/or eat a "yule log."
A "yule log" is apparently what a Swiss roll is called in small-town America. 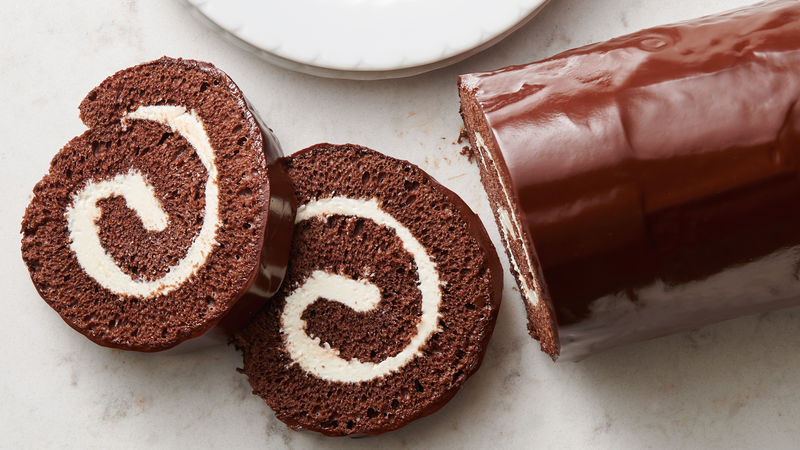 It's basically a giant Hostess Ho-ho, except in Christmasville, it must for some reason be slathered in a weirdly glistening chocolate ganache that makes it look uncomfortably like a giant doo doo.

There is a company of actors and actresses that appear over and over in these movies.

Oh, and EVERYONE's teeth are this blindingly white. They must all shove Crest White Strips in their mouths between takes.

In this alternate universe, she is the Jennifer Lawrence, the Amy Adams, the Scarlett Johanson of their world. Her IMDb page includes credits for starring in

The Tree That Saved Christmas

A Wish For Christmas

Other times, you'll see actors and actreses you recognize and it feels kind of sad.
Like Mira Sorvino or Brian Doyle Murray. 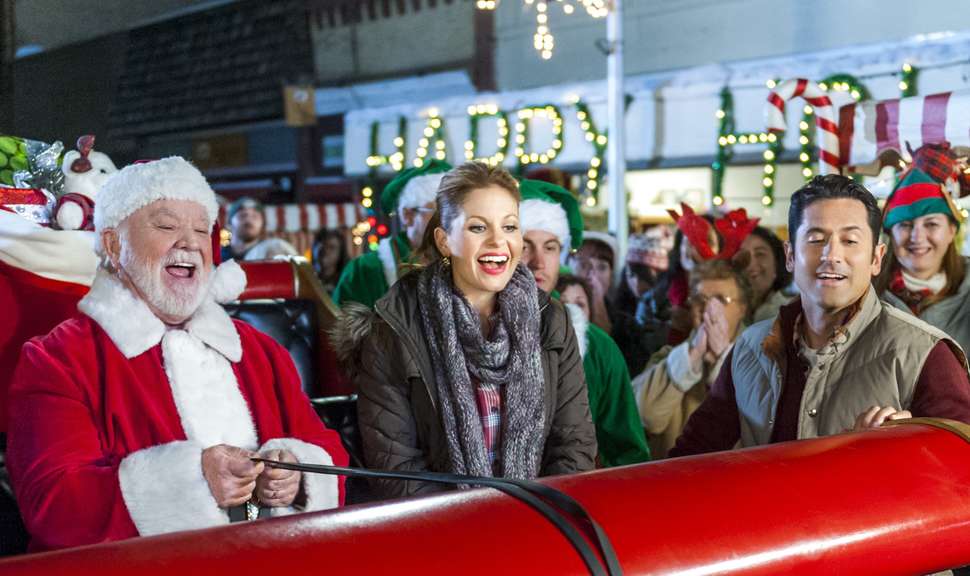 Every small town in this world has some sort of a Christmas festival. This festival is the most important event in this town. It's more imp[ortant than the lottery in Shirley Jackson's The Lottery. And yet, it's always really half-assed. For all the time and effort this town puts into the festival, it's generally just a few decorated pine trees, maybe an ice-rink and booths for hot chocolate and cookies where, as mentioned before, NO MONEY EVER CHANGES HANDS. Money changing hands is strictly forbidden. In one of these movies, a vetrenarian makes a house call, works on a sick pet and when the owner asks "how much do I owe you?" scoffs "It's Christmas!" 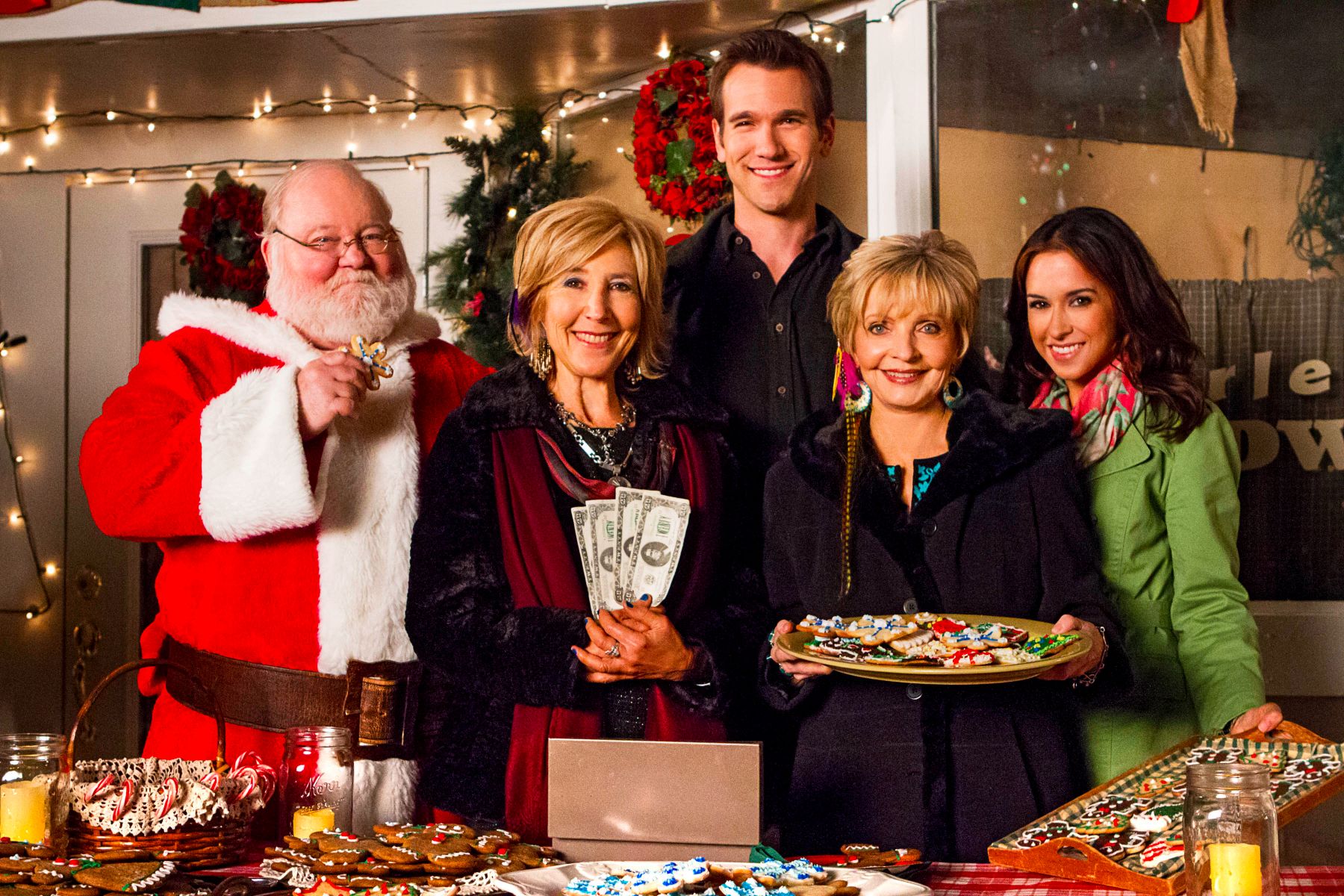 Here's a little anecdote that illustrates the feel of these movies. In one of these little towns, there is a Christmas festivity going on. The leading lady gets a phone call from a frantic woman telling her that the sound system has shorted out and no no one will be able to hear the choir concert. Of course she saves the day by showing up with the "best handyman in town" who apparently only she knew even though this is a town where everyone knows everyone else. While the handyman is fixing the wiring, someone walks out on stage and, in a normal speaking voice, tells the crowd that they're having some technical difficulties and the crowd has no problem hearing her. Then out comes the choir which consists of a grand total of six singers who sing in unison, no harmony, sing two songs and leave. Because Hallmark channel does not have the budget to hire an actual choir, I guess.
The decoration budget isn't musch better. Someone will put a strand of lights on their eaves and a wreath on the door and people stop to ooh and aah at the amazing job they did with the decorations.

Now here's the weird part. Given who the target audience for these films must be - given how wholesome and uplifting and sexless they are, it is very odd that not once is Jesus mentioned. No one talks about Christmas being special because it is the day we celebrate the birth of the Christ or anything. No one even says "we'll open our presents after we get hoime from church. They never mention anything religious. And they talk a LOT about the reasons that Christmas is so important. But it's always "Christmas is important because it reminds us that wishes can come true" or something like that. I'm not complaining, it's just weird.

Also weird, amnesia seems to happen way more than would be statistically expected. There might actually be a curse on this world because there are WAY more widows and widowers than there should be and there are at least three different women in this small world who get struck by Christmas-time amnesia.(Don't worry, they're all fine.) I haven't seen the movie Overboard, but I'm pretty sure these movies borrow pretty heavily from it.

Okay, one more story. There is one movie in particular that, if you were going to watch a Hallmark Channel, you should probably start with. It's called A Bramble House Christmas. In this movie, Lacey Chabert discovers that she has ingerited some money from a man she had taken care of in a nursing home. He also has left her a Christmas vacation to a B&B in small town Colorado for some reason (The plot of this movie echoes the Shining in a lot of odd ways that can not be unintentional.) At the B&B, she meets a man who happens to be the illustrator of her son's favorite series of books. Almost immediately, she starts allowing this man to spend time alone with her young son, even having no problem when they go off together into a locked room to work on something that's "a secret." In fact, while her son and this virtual stranger of a man she met two days ago are sequestered in this room, she slips a note under the door saying "Gone Skating!" so that this man knows that not only is he alone in the room with this little boy, but his mother has left the building entirey, so there is no one to hear the screams.
Of course, the man does not harm the boy. It's Hallmark town. Everything ends happily. In fact, Lacey Chabert decides to stay and take a job a the caretaker (Shining) and the illustrator obviously can work from anywhere, so. . . happily ever after. The movie closes with Lacey Chabert spoting a picture on the wall of the old man who left her the money when he was a young boy and he looks an awful lot like her son and I kept waiting for someone to say "you've always been the caretaker." 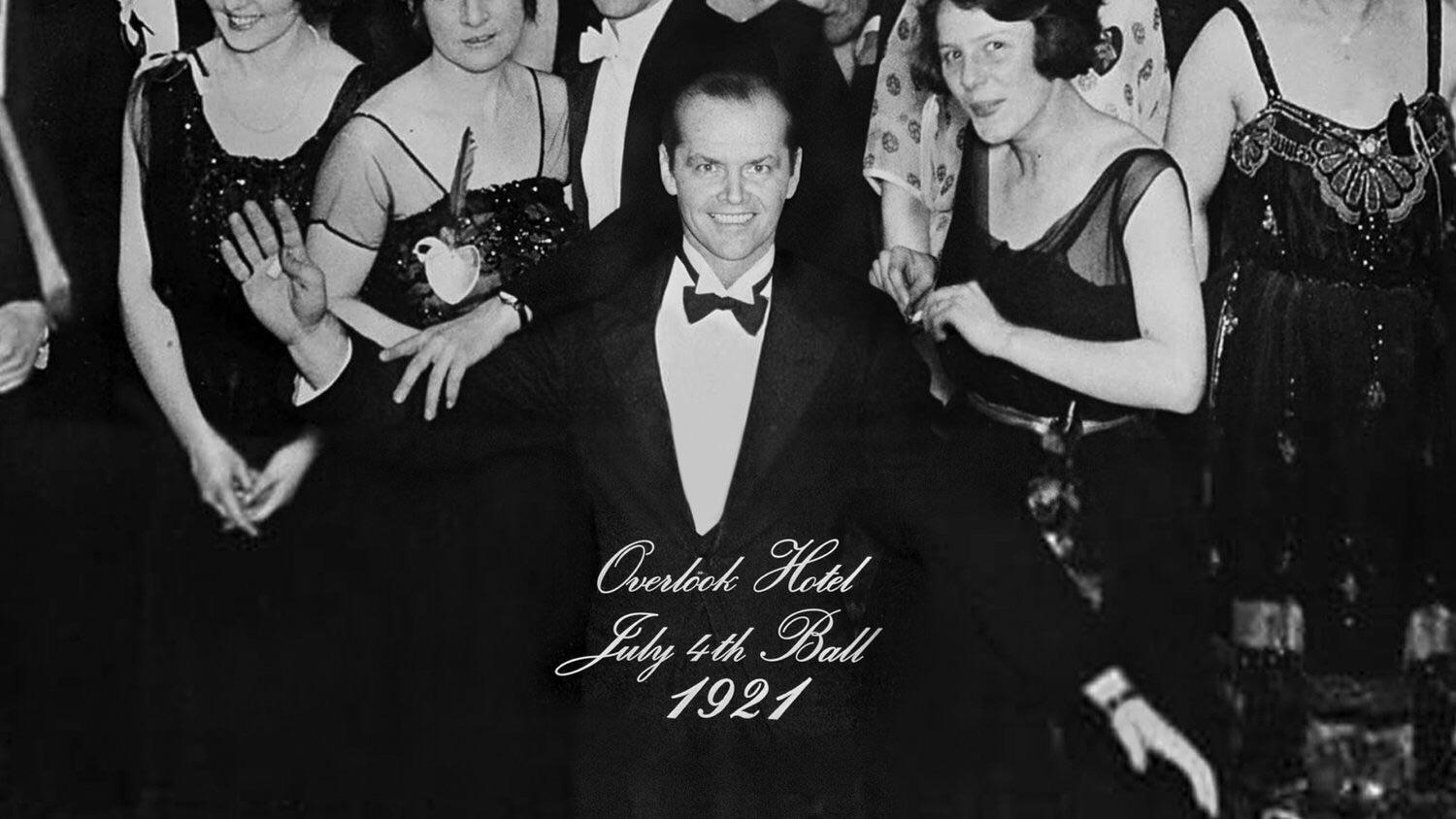 Anyway, I think I've returned to our reality, but the Hallmark Channel is threatening to run Christmas movies every week throughout the year, so pray for me!