Okay, so a Navy ship collided with a civilian craft a couple days ago and some sailors are M.I.A. and there was a search and rescue operation underway, and apparently Trump gave it the ol' Jerry Seinfeld response.

And the best part is, no one cares.
It's a sign of how far we've come in the last 7 months that no one is upset about Trump shrugging off the possible deaths of US Servicemen.

If Obama had responded like this to a similar incident, the right would have been up in arms and rightly so.
If Dubya had been this cavalier about missing sailors, progressives would have pilloried him. And rightly so.
But Trump? You hear that Trump just blows off something like a Naval shipwreck and everyone just goes "yeah, that seems right."

I mean, he didn't call the missing sailors "losers." He didn't take the opportunity to brag about his yacht. He didn't even try to blame it on Obama. All in all, I'd take this as a win.

So someone had to. 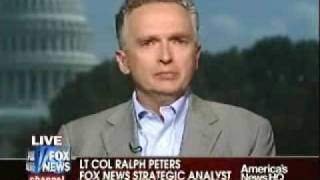 yes, Ralph Peters, the man who perpetually looks as if he's just sat in something damp, is once again called upon to explain how everything bad that happens snywhere is the fault of some durn lib'rul.

Guest host Ashley Webster asked Fox News' military and strategic analyst, Lt. Col. Ralph Peters, why with our fabulous technology, these crashes keep happening.
At first, Peters blasted the officers and the crew, "The obvious conclusion is the officers on the bridge and the seamen don't have basic navigation skills. They don't, no longer are drilled in basic seamanship. They don't have the discipline they should."


And you know no one has a better grasp of the current state of the Navy's training programs that a retired Army Colonel who last served in 1998.


Although I assume he is partly right, they probably don't spend as much time learning to navigate because there are now computers that do a lot of the navigating for them. Not a lot of call anymore for a fella that can work a sextant.
[heh heh heh, "sextant!"]

Peters continued, "You had the horrific behavior of the sailors who were grabbed by Iran without a fight."

You're upset because a handful of US military personnel didn't try to start a war with Iran? That's what you consider "horrific behavior?" That these sailors didn't recklessly get themselves killed over nothing?
And what the fuck were they going to do? One US ship versus the entire military of Iran? On Iran's homefield? What are they, the magnificent Seven? Are they a bunch of John McClanes? They're going to somehow defeat the entire nation of Iran by themselves? What the fuck is wrong with you?

Oh my God, I see it all now. You teach a sailor to not be a racist or not to be an asshole to gay people, or not to sexually assault female sailors, of course they're going to forget how to steer the boat! Oh, it's all so obvious now!

And speaking of obvious. . .

Alysin Camerota sat down with a group of Trump voters from Florida, Pennsylvania, Michigan, Alabama and Georgia to see how they react to Trump's policies -- including his decision to increase troops in Afghanistan. She asked who supported the move. Everyone raised their hands.

Yeah, of course they did. You put out a casting call for people who are still horrid enough to support Dolt 45, did you think there was a possibility that THIS was going to be the last straw for them? Like someone was going to say "I 'm fine with him supporting Nazis, I'm fine with him trying to start a war with North Korea, I 'm even okay with him trying to strip healthcare away from 20 million Americans, but this! This increase in troop levels? That is a bridge too far!"


"I think it's a serious problem that we've kind of not taken that seriously in the last eight years of Obama. and this is what he said he was going to do, that he was going to --"
"No, he didn't," Camerota said, quickly pointing out that Trump criticized Obama for doing the same thing.
"How many generals did he talk to before he tweeted that?" one person asked. "None. He didn't have the information at that time."

Oh, well defended!
And this doesn't at all raise the question of whether, having zero fucking information on the subject, he should have been shooting off his stupid fat ugly mouth about it!


Also, tRump's supporters insist that everything is fine now, because he has these generals, these experts, that he listens to who tell him what to do. Would these be the same generals that Cheeto Mussolini said he knew more than? [pardon my syntax] 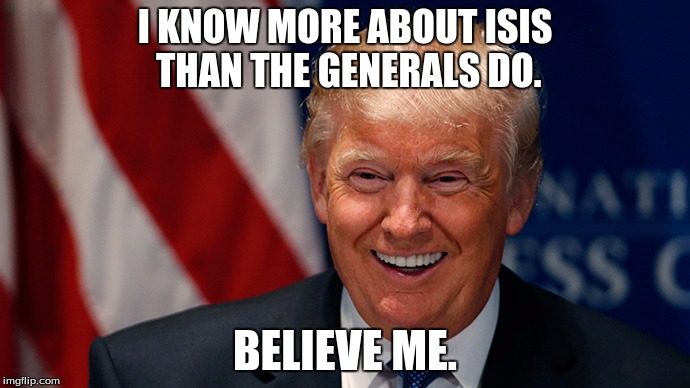 These people aren't worth talking to. They are completely divorced from reality, immune to facts, and allergic to logic. They add nothing to the discussion.
Of course the same could be said for any and all of Trump's actual paid spokespeople.


Katrina Pierson, currently with the America First Policies group, said on Fox and Friends Monday that there are reasons to keep markers of the 1860s rebellion against the United States.
“Americans actually love their history, their culture, good and bad because it helps them learn and it helps keep people educated about why America is so great to begin with,” Pierson said.
“It absolutely deserves a place, because bad history is still good history for this country.” “Slavery is good history?” Osefo asked in disbelief.