How to Become A Music Star

Perfecting your craft, honing your skills and believing in yourself are all fine things, but they will never make you a star.

At least not according to the good folks at Vigilant Citizen, the only website with the guts to tell the truth about such subjects as:

Jay-Z’s “Run This Town” and the Occult Connections


Spend a few moments perusing this site, and you'll see that the only surefire path to musical stardom is to be chosen by whatever shadowy cabal is running the world from behind the scenes this week.

"Jay-Z’s latest video called “Run This Town” (featuring Rihanna and Kanye West) contains occult symbolism relating to secret societies. It has been long rumored that Jay-Z is part of some sort of occult order (probably Freemasonry) due to the hints slipped in his songs and his imagery. "

See, the logic here is unassailable. If you were a member of a clandestine, covert group whose vast power depended upon the lumpenproletariat remaining ignorant of your existence and purpose, you'd certainly want Jay-Z to put all sorts of hints and clues to who you are and what you stand for.

Just look at the video for Jay-Z's "Run this Town."
At first, sure it looks like it's referencing the Zapatista Rebels or other guerrilla groups preparing to attack the city and take it over, to "run this town," as it were. But take a closer look at the symbology in play here:

At the beginning of the video, a man hands a lit torch to Rihanna who holds it up in the air. This symbolic gesture sums up perfectly the concept of the video. Anybody vaguely familiar with occultism can easily associate the symbol of the lit torch held high to Lucifer a.k.a. the Light Bearer.

Because no one ever in history has ever held a torch aloft for any reason other than to honor Lucifer!

Consequently, the video contains a second level of interpretation: “Run This Town” is an announcement of the coming of a New World Order, lead by secret (Luciferian) societies. Rihanna’s ominous intro explains how it is going down.

Feeling it coming in the air, hear the screams from everywhere, I’m addicted to thrill, Its a dangerous love affair, Can’t be scared when it goes down, got a problem tell me now, Only thing that’s on my mind is who gon' run this town tonight, who gon run this town tonite

Because, if your Lucifer-worshipping cult is going to take over the world, and usher in a New Order, it's only sporting to give fair warning to the current order.

(Chairman of Universal Music Group, unless there's another, more sinister Doug Morris I don't know about)

Also, might be Doug E. Fresh, or Doug Flutie, or Disney's "Doug"!

Who knows how deep this goes?

And it's not just Jay-Z. Oh, no! That's what they want you to think!


There are others, oh yes, many others!
We can start with Lady Gaga!

Her name is also said to be inspired by Queen’s song “Radio Gaga”. The video of this song contains many scenes of the 1927 movie Metropolis. . . the motion picture tells the story of a woman from the working class that was chosen by the elite to give life to a robot, through a mix of science and Black magic.
This robot becomes a sexy and alluring performer and is given the goal to corrupt the working class. References to this movie abound in music videos, as if it was very significant for the occult elite. 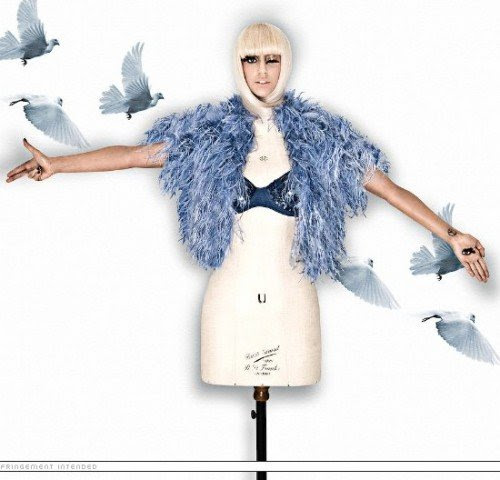 This last picture is very significant. It confirms the fact that the closed eye is used in the context of esoteric symbolism. Her left eye is in her hand, referring to the Hand of Fatima (evil eye). Also, one can’t ignore the resemblance with good ol’ Baphomet. 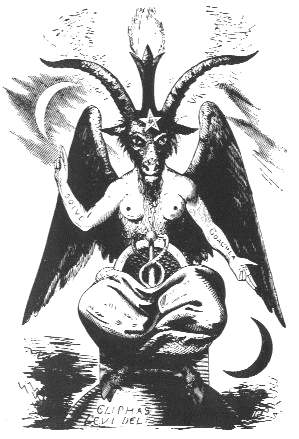 Good God! The resemblance is uncanny!
He has wings, she has a shawl. He sits cross-legged, she has no legs!
She keeps one eye closed (Eye of Osiris?) while his are both open!
He appears to be half man, half goat while she seems to be half woman, half dress form.
They're like carbon copies! His hands are even outstretched, pointing at a white moon and a black moon, while her hands point sort of in the direction of several doves. Eerie!

Honestly, the entire music industry seems to be in on it. Just check out the recent Video Music awards:

From unexpected drama to shocking performances, MTV’s 2009 Video Music Awards managed once again to raise eyebrows and get people talking. What most people missed, however, were the occult meanings encoded in the VMAs. The TV event was in fact a large scale occult ceremony, complete with an initiation, a prayer and even a blood sacrifice. . . The VMAs were decisively inspired by dark, sinister and even Satanic ceremonies.

Madonna, the music industry’s High Priestess, the revered “elder” of MTV, opens the show with a very solemn eulogy for Michael Jackson. . . Madonna’s tribute focused on the fact that MJ was “otherworldly” and “a king” but she insisted on the fact that he was also a human being. It was wisdom that could only be imparted by the High Priestess. Members of the audience bowed their heads and meditated on her words.

See, I never really understood before the significance of the "moment of silence" ritual. I always assumed it was to honor the person who had died, but now I see that it is a chance to meditate about Madonna. Makes perfect sense! 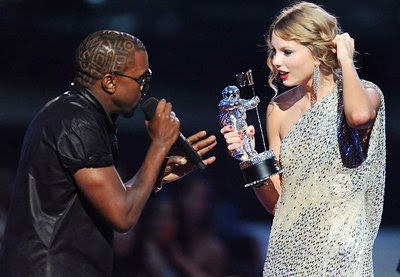 This scene is in fact Taylor Swift’s initiation into what I call “The Circle of Chosen Artists”. The pupil is humiliated in front of her peers and told that she is not worthy to be on the same stage as Beyonce, the queen of the ceremony. Almost all groups, fraternities and gangs carry out an initiation process to test the recruit’s character, strength and worth. Swift’s ordeal was to have Kanye ruin her first award ever and to be told that she didn’t deserve this recognition. The rapper is known for bitching during award shows so he was the perfect candidate to make it all seem “unexpected”.

So that's why he's spent the last several years cultivating that perfect douchebag persona! I should have known, no one could possibly really be that big a tool in real life!

Right after her performance, Gaga appears dressed all in red, with her face completely covered in red. She is basically a walking, talking blood sacrifice. It represents the aftermath of fame, the hellish life that follows the sacrifice, the selling of the soul for success in the music industry. 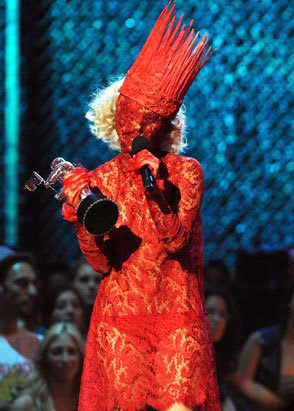 Because, if you want to recruit new followers to your cult, it's important to show them the "hellish aftermath." That's just marketing 101!

More spookiness from the VMA's: 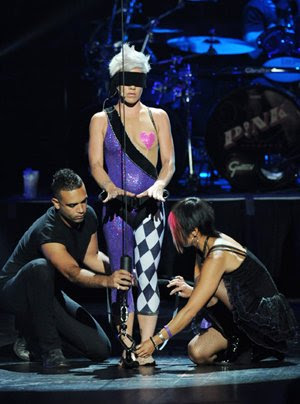 There is no way a Mason could watch this performance without recalling his initiation into the First Degree. Here’s a description by Mark Stavish:

“The candidate for initiation is stripped of all material possessions and dressed in a strange and peculiar garb (…). This includes a blindfold and a length of rope called a cable tow.”

Pink’s performance was a dizzying display of acrobatics which undoubtedly left her (and the viewers) totally disoriented. This is also a feature of Freemasonry’s First Degree initiation:

“He is then blindfolded and a cord in the form of a noose is passed round his neck. At this point the novice is entering the marginal stage, associated with ordeals; he cannot see, his sense of direction has been confused and he has been dressed like a victim for execution.”
-J.S. La Fontaine, Initiation – Ritual Drama and secret knowledge across the world

Pink’s performance was yet another blatant reference to ritual dramas in occult orders.

Yes, a "dizzying display of acrobatics" is pretty much the same thing as having a noose placed around your neck.

Anyway, you get the picture. The music industry is controlled by the "illuminati" or whatever, a group which is so enlightened that they have turned their backs on Judeo-Christian mythology and instead, worship Goat Boy. A group which, if the DaVinci Code has taught us anything, has been around for centuries, plotting to take over the world. (And you thought you were a procrastinator, Good Lord, what are these guys waiting for?) And like any super-powerful shadowy cabal would do, if given the chance, they have recruited Jay-Z, Pink, and Taylor Swift to play an important role. And this important role includes dropping hints and clues as to the group's existence and purpose.

Posted by Professor Chaos at 11:55 AM No comments:

The Internet is Made of Cats!

Posted by Professor Chaos at 11:48 AM No comments: