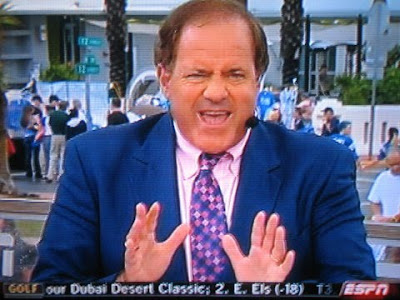 No matter how exciting the highlight, it can still be ruined by Berman. It's like sitting at a sports bar next to a drunk. A drunk with a painfully low IQ. And a mild case of Tourette's.
The insipid nicknames, the inability to string together a coherent sentence, the fact that he refers to himself as "the Schwamm" when making his football predictions. And who the fuck told this doofus that it is clever or charming or interesting to shout He! Could! Go! All! The! Way!
Honestly, as soon as I see his dumbfuck mug on screen, I can't hit the mute button fast enough! 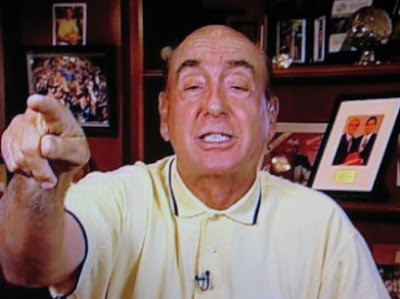 "dipsy-doo dunkaroo"
"diaper dandy"
"P.T.P. -Prime time player!"
The Dickie V-ism's may be even more egregious than Berman's idiotic nickname obsession. Plus, Vitale never ever speaks at a normal volume. He shouts like he's being mauled by a bear whether he's describing a spectacular play or exhorting one of the coaches to "call a time out Bay-Bee!!! You need a T.O. Bay-bee!!!" Ech! 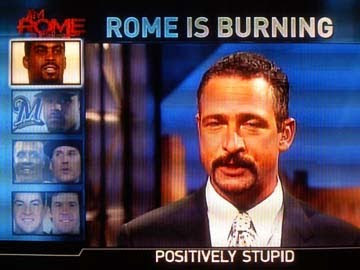 Like the frat boy who never grew up, Jim Rome just can't open his mouth without making me want to punch him. He first came to public attention for referring to Rams quarterback Jim Everett as "Chris Everett." (Ha! Brilliant!) then staging a phony sort-of half-assed "fight" with Jim. Somehow he ended up with his own show on ESPN, where he talks like he is being strangled, uses douchey terms like "smackdown" "punked" and "cred," and refers to his callers as "clones." He refers to Albuquerque as "Al-butt-crack-ee." He refers to himself as "the pimp in the box." Basically, just an all-around tool.

There are probably more people out there who ruin sports, but these three are the first that come to mind.
And I love sports. So it takes a lot of awful to ruin them for me.
Posted by Professor Chaos at 6:43 PM 2 comments: