Well, despite his best efforts to seem all butch and tough and wingnutty as possible, Lindsey Graham knew it was inevitable that he was going to get primaried by someone more extreme/crazier. He was expecting that. He probably wasn't expecting this:

Yes, Bruce Carroll, one of the leaders of the ironically-named "GOProud," the group that split off from the Log Cabin Republicans because they just weren't self-loathing enough, is going to challenge Lindsey Graham for the job of Senator. From South Carolina. Because where else would the first openly-gay Senator come from than South Carolina? 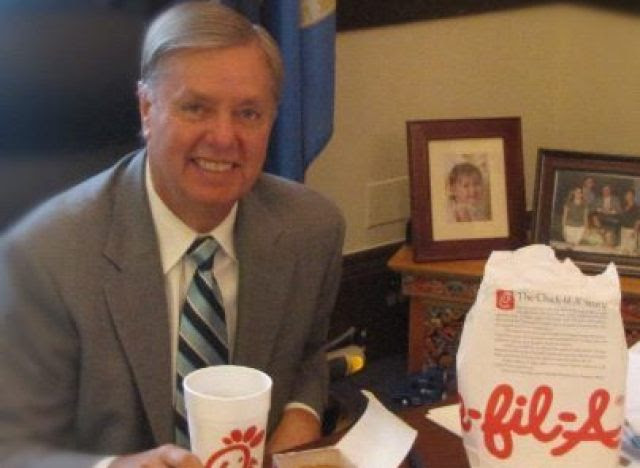 No, I said "openly"
(how much does Graham have to hate himself to do this photo-op?)

He made his announcement on a website called "The Gay Patriot" or "Gaytriot" for short.

Here, in my opinion, is the highlight:


In the spirit of transparency and honesty, I informed my fellow GOProud board members that I could not dedicate the time to the organization while I seriously considered the effort it will take to challenge Senator Graham in the 2014 Primary.


Because you can't expect the man to hold down a full-time job AND consider something at the same time! Not if you want him to "seriously consider" it. Hmm, I wonder if he'll still be drawing a salary while he considers how best to rake in those sweet, sweet, untraceable campaign contributions?

Oh, and this was good, too:


I felt it best to resign from GOProud in advance of the CPAC conference this week so that my position in GOProud would not be a distraction from my serious deliberations regarding my potential future plans in South Carolina public service.

Because GOProud has very conspicuously NOT been invited to CPAC? Because if there's one thing the Republican base hates more than Lindsey Graham's occasional flirtations with sanity, it's gay people? So maybe if you resign from GOProud, they might not notice that you're actually a gay person yourself and might consider voting for you? The CPAC base doesn't even want you in the building. lest your gay cooties infect their perfectly hetero wieners.

GOProud, a Republican gay-rights group, is still not officially invited to attend CPAC, next week's conservative conference in the D.C. area -- but it will be on site.
Jimmy LaSalvia, GOProud's co-founder and executive director, will be participating in a panel happening at the same time as CPAC, in the same building as CPAC. . . LaSalvia is excited to participate, and says his understanding is that CPAC is unhappy with the additions.

They hate you, Bruce. Almost as much as you apparently hate yourself. There aren't enough self-loathing closet queens in the state of South Carolina who feel strongly enough about fiscal conservatism or whatever to risk being seen as someone who might consider voting for you. You have no chance. But please, don't let reality dissuade you from running. I need the material.
Posted by Professor Chaos at 10:37 PM 2 comments: