We Have A Winner!

With one day left in the competition, Michele Bachmann (R-Insania) has just put herself over the top for Public Disgrace of the year 2010!

The award is given to the person who does the most to bring disgrace upon our fair nation and the voters who put him or her in a position of responsibility.

Besides just being Michele Bachmann, which is disgraceful enough, our winner has produced a steady series of stupid, crazy and paranoid quotations the like of which we haven't seen from an elected official since Jim Bunning last went off his meds.

A few highlights include:

I want to thank Governor Palin for breaking the barrier by being a woman as a vice president on the ticket.

I had a great career as a federal tax attorney, and I don’t need government to be successful.

But now the topper. Michele explains how she became a Republican:
.


Until I was reading this snotty novel called 'Burr,' by Gore Vidal, and read how he mocked our Founding Fathers. And as a reasonable, decent, fair-minded person who happened to be a Democrat, I thought, 'You know what? What he's writing about, this mocking of people that I revere, and the country that I love, and that I would lay my life down to defend -- just like every one of you in this room would, and as many of you in this room have when you wore the uniform of this great country -- I knew that that was not representative of my country.

And at that point I put the book down and I laughed. I was riding a train. I looked out the window and I said, 'You know what? I think I must be a Republican. I don't think I'm a Democrat.'

I always love when people proclaim that they would gladly lay down their life for their country. Those people have almost never served in the military. I always want to say "hey, there's an Army recruitment Center just down the street, let's go get you signed up!" I always think of that when I hear the Gawdawful song "God Bless the USA."

There's a line that says "I'd gladly stand up next to them [those who died for our freedom] and defend her still today," and I just want to forcibly enlist Lee Greenwood and anyone who sings that song in the Marine Corps. It's like  guy telling his wife, "I would die to protect you honey, oh shit! A mugger! Take her!" But I digress.

You seriously became a Republican because you thought Gore Vidal was a jerk? By that standard, shouldn't you have switched to another party when you found out that Mark Foley was hitting on teenage boys, or Duke Cunningham was taking bribes, or David Vitter likes kinky diaper-sex with hookers? Shouldn't you have said "Hey, I'm not a pederast, I'm not a hooker-fucker, I guess I'm not a Republican after all." I mean, if you're going to judge the entire Democratic party  by a book written by a man who is not even a political office-holder, shouldn't you apply the same standard to the Republicans? Shouldn't you have looked at Ronald Reagen and said "I'm not a senile incompetent who runs shocking deficits while preaching fiscal responsibility. I don't swap arms for hostages while looking America in the eye and vowing 'we will not negotiate with terrorists.' I haven't sold chemical weapons to Sadam Hussein or armed a bunch of Muslim radicals led by Osama bin Laden," I must not be a Republican."
But no. A book about Aaron Burr gets you upset enough to change parties, but 8 years of the corrupt incompetent Bush administration? That just strengthens your party loyalty? Now that's crazy. And stupid. And that is why Minnesota's own Michele Bachmann is the winner of the Public Disgrace of the Year Award for 2010. Great job, Minnesota. You must be so proud.
Posted by Professor Chaos at 4:01 PM 4 comments:

A Theology Lesson From Pat Robertson

VIRGINIA BEACH (The Borowitz Report) - Rev. Pat Robertson sparked controversy in today's broadcast of his 700 Club program when he claimed that God created the blizzard currently battering the Northeast "to punish Americans who were planning to drive to do something gay."

Explaining his theory, Rev. Robertson said, "Because of the bad road conditions the Almighty has made, any gay activities that people were planning on doing will have to be postponed by a day or two."
Additionally, he argued, God shut down major airports in the New York area "so that people who were hoping to fly to do something of a gay nature would have to take a train or a bus, so it might be days before the gay thing they were going to do could occur."


So I believe the lessons we should learn here are:

1) God doesn't want you doing gay stuff in the winter. Wait until Spring to be abominations unto the Lord

2) God has a surprisingly weak grasp of American geography, sending a blizzard that completely bypassed the Castro, West Hollywood and Boys' Town. 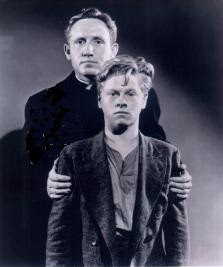 (Boys' Town. See what I did there?)
4) God can't stop the gay, he can only hope to delay it for a couple of days.
5) This story is probably a parody, because if Pat Robertson had really said domething like this, he would probably have added something like "God can't smite all these bad people by himself, he wants you to send me whatever money you still have left to finance a gay-smiting mission."
6) The fact that people see this story and think it's probably true says a lot about what a horrible person Pat Robertson is.
Posted by Professor Chaos at 3:15 PM 2 comments: