"My penis is the same size as my IQ!

Of course, that sort of thing doesn't even register as crazy these days.

Potential presidential candidate Rick Santorum — who lost his Pennsylvania Senate seat in 2006 but has been raising his profile as a devout conservative in the last year — warned a crowd of about 100 Republicans that the country they grew up in could vanish if Democrats keep the White House in the next election.

The America in which medical problems lead straight to bankruptcy? That might disappear? I wish! I wouldn't worry too much about that, though.

Santorum related the story of his grandfather, who immigrated from Italy because he yearned for the freedom America promised. But Democrats, he said, are attempting to engineer “a fundamental shift,” and could turn the country into a European-style socialist state in the next few years if they aren’t checked.

Have you ever been to Europe? It's really not a scary place at all. People are happy there. You really have to be an incredibly xenophobic ignoramus for "European-style" to be a threat.   Also, have you met these Democrats? These putzes aren't changing anything.

So how exactly does healthcare reform threaten the American way of life?

The reason Obama’s health care plan threatens the American way of life, Santorum said, is that “once the government has control over your life, over your health, it’s almost impossible to get it back, almost impossible to get freedom back.”
It’s part of the Democrats’ plan, he said. Fox News commentator Juan Williams boiled it down for him, Santorum said.

The answer, Santorum said Williams told him, is that Democratic leaders knew that Americans love entitlements, and that by turning health care into an entitlement the die would be cast. “Once we get them hooked on this entitlement, they will never let it go,” Senate Majority Leader Harry Reid and House Speaker Nancy Pelosi believed, according to Williams.

Which is why the Democrats specifically did not do that? That's why single-payer was never on the table? They wanted people hooked on an entitlement so they didn't make it an entitlement? Did Santorum hire Lewis Carroll to be his speechwriter?

Um, less than what God created you to be? What does that even mean? What exactly was I created to be? And how would heath care make me less than that? It makes no freaking sense? But wait, there's more!

Santorum talked about statistical proof of American exceptionalism — arguing that life expectancy didn’t increase for thousands of years until America was founded, and then it doubled in 200 years.

Wow, really? Here's another statistic you might find interesting. In 1966, the average life expectancy for American males was 66.7 years. In 1967, I was born. Since then, life expectancy has increased to 75.7 years. By Santorum's reasoning, I can take credit for that.
Of course, the increase in life expectancy over the last 200 years might have more to do with Englishman Edward Jenner inventing immunization  Or Frenchman Louis Pasteur developing the germ theory of disease. Or the German Emil Von Behring's discovery of antitoxins. But yeah, probably it's just because of America being founded. Idiot!

I weep at the thought of living in a country of which my daddy is president!
Posted by Professor Chaos at 8:45 PM 4 comments:

Why Exactly Are We Supposed to Take This Guy Seriously? 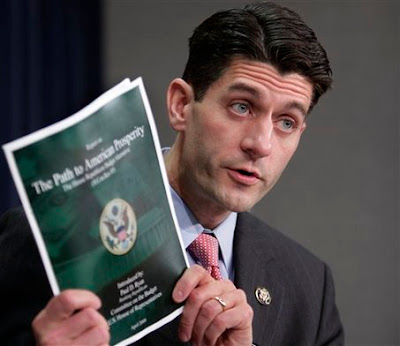 I haz a plan?
I don't understand why Paul Ryan's budget plan is supposed to be one of the serious options that serious people need to take seriously. Forget for the moment that the plan includes destroying Medicare and Medicaid and whatnot. Just the fact that the plan to decrease the deficit includes lowering taxes on the top income group should automatically disqualify this little snake turd from being taken seriously.
If I'm going over the bills at home and I say to my wife "geez, schmoopie, we're running up some serious debt here. I think I may have to quit my job," she would have me committed. And rightly so. How in the hell does anyone think that you can decrease a deficit by taking in less money? Even if you believed this Milton Friedman voodoo economics prior to the 1980's, hasn't it been thoroughly disproven by the enormous debts the Gipper ran up?

And speaking of Reagan, even he wasn't as big a nut as the teabagger's mythologized version of Saint Ronnie. When he came into office, the first thing he did was slash taxes. (Technically the second thing after having the solar water heaters removed from the White House) But when he saw the deficit ballooning out of control, he realized that he had cut them too much and he raised them  a little. Yeah, Reagan RAISED taxes. Then he raised them again. And again. A total of 11 times. (source)

Heh? I did what, now?
He never did raise them enough to get the deficit under control, but that's not really the point. The point is, even Reagan realized that tax cuts aren't the answer to every problem. Today's wingnut Republicans seem to think that they are. "Oh, the economy is bad? Better cut taxes on the wealthy. Economy's doing better? Time to cut taxes on the wealthy! The deficit is spiraling out of control? I guess we haven't cut taxes enough yet. The last round of tax cuts made the deficit bigger? We'd better cut taxes!" It's ridiculous. Yet, for some reason, we as a society have apparently decided that we need to consider this nonsense as if it were a legitimate solution to our nation's problems. It makes me want to bang my head against the wall until I'm stupid enough to get it.
Posted by Professor Chaos at 6:53 PM No comments:


Roethlisberger isn’t living with fiancee because of religious beliefs

Roethlisberger and Harlan became engaged around Christmas, but the quarterback refused to talk about the subject during the Steelers' run to the Super Bowl.

Another revelation in the lengthy interview was that Roethlisberger won't live with Harlan until the wedding because of their religious beliefs. She still lives at home with her parents in nearby Newcastle.

Oh, good for you. Ben! Because we all know that the Bible forbids you to have sex with a woman to whom you are not married. Unless you're really drunk. And you follow her into the ladies' room. That's apparently OK.  Nice values, there, Ben!
Posted by Professor Chaos at 5:25 PM No comments: